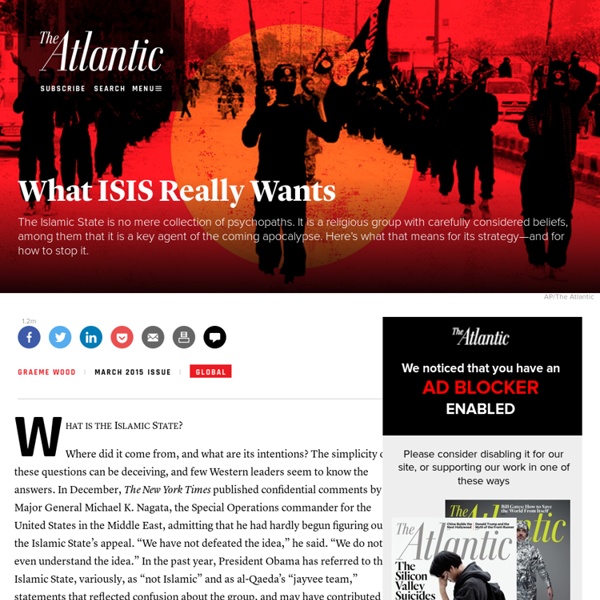 What is the Islamic State? Where did it come from, and what are its intentions? The simplicity of these questions can be deceiving, and few Western leaders seem to know the answers. In December, The New York Times published confidential comments by Major General Michael K. Nagata, the Special Operations commander for the United States in the Middle East, admitting that he had hardly begun figuring out the Islamic State’s appeal. “We have not defeated the idea,” he said. The group seized Mosul, Iraq, last June, and already rules an area larger than the United Kingdom. Our ignorance of the Islamic State is in some ways understandable: It is a hermit kingdom; few have gone there and returned. The Islamic State, also known as the Islamic State of Iraq and al-Sham (ISIS), follows a distinctive variety of Islam whose beliefs about the path to the Day of Judgment matter to its strategy, and can help the West know its enemy and predict its behavior. But Adnani was not merely talking trash. I.

Iranian Women Post Pics With Their Hair Flying Free To Protest Strict Hijab Laws Wearing the Islamic hijab veil is mandatory for women in Iran, and in 2014, Iran's morality police warned, fined or arrested 3.6 million women for inappropriate dress. Masih Alinejad, an Iranian journalist and activist living in the U.S., wants to change this, and she's started by inviting Iranian women to send in pictures of themselves enjoying their unveiled hair. Alinejad makes her points beautifully in an interview with Vox; "My mother wants to wear a scarf.

10 Things We Just Don't Know About Language And Communication Humans By the time we’re in school, we’re able to do it without even really thinking about it. It’s rare that we go through a day without using a handful of different types of communication. It’s so automatic that it almost seems like it’s hard-wired into us—and perhaps it is. There’s still a lot we don’t know about just how our ability to communicate through language came about, where it’s going, and when we’re finally going to be able to communicate with animals. A list of things I wish women's magazines would publish You don’t need to get your clothes tailored. No one needs to get their clothes tailored. No one gives a damn if you have a signature cocktail at your party. Literally no one. Buy seven more bottles of wine and don’t worry about it. It’s totally fine to buy most of your wardrobe from Forever 21 and when people ask about it, just say you bought it at Zara.

Mohammed: the Anti-Innovator click on image for video Transcript Ayaan Hirsi Ali: Early on, it seemed as if Mohammed's ambition was simply to go from door to door from person to person and say, "Leave alone what you believe in. Believe in the one God, the one who spoke to me through the angel Gabriel." That's how you say it in Arabic and Gabriel in English, and then exhort people to do certain things that in the 21st century we understand as religion: prayer, fasting, congregations — that sort of thing.

10 Side Show Circus Workers Who Actually Existed If any of you are fans of American Horror Story's "Freak Show" then brace yourself for a list of equally fascinating people who have actually existed throughout history. Unfortunately, it's saddening to realize that many of their lives weren't the greatest nor were many of them treated properly or with respect, but then again human beings suck and we still don't treat each other properly, so there's nothing anyone can do. We legitimately just gave women the right to vote this century, so, we're kind of behind on a lot of things. This list of what people so meanly referred to as "freaks" is incredibly fascinating.

Paris climate activists put under house arrest using emergency laws At least 24 climate activists have been put under house arrest by French police, accused of flouting a ban on organising protests during next week’s Paris climate summit, the Guardian has learned. One legal adviser to the activists said many officers raided his Paris apartment and occupied three floors and a staircase in his block. French authorities did not respond to requests for comment but lawyers said that the warrants were issued under state of emergency laws, imposed after the terror attacks that killed 130 people earlier this month. The author and climate change campaigner, Naomi Klein, accused French authorities of “a gross abuse of power that risks turning the summit into a farce”.

Mindless terrorists? The truth about Isis is much worse It’s “the first of the storm”, says Islamic State. And little wonder. For the chaotic scenes on the streets of Paris and the fearful reaction those attacks provoked are precisely what Isis planned and prayed for. The greater the reaction against Muslims in Europe and the deeper the west becomes involved in military action in the Middle East, the happier Isis leaders will be. Because this is about the organisation’s key strategy: finding, creating and managing chaos. Forgotten fairytales slay the Cinderella stereotype Once upon a time … the fairytales you thought you knew had endings you wouldn’t recognise. A new collection of German folk stories has Hansel and Gretel getting married after an erotic encounter with a dwarf, an enchanted frog being kissed not by a damsel in distress but by a young man, and Cinderella using her golden slippers to recover her lover from beyond the moon. The stash of stories compiled by the 19th-century folklorist Franz Xaver von Schönwerth – recently rediscovered in an archive in Regensburg and now to be published in English for the first time this spring – challenges preconceptions about many of the most commonly known fairytales. Harvard academic Maria Tatar argues that they reveal the extent to which the most influential collectors of fairytales, the Brothers Grimm, often purged their stories of surreal and risque elements to make them more palatable for children. Many of the stories centre around surprisingly emancipated female characters.

The Ultimate Photo Recap of Beyoncé’s Beyoncé Interview time, the moment all pageant girls dread as they are expected to string a sentence together for a solid 45 seconds, sometimes even a minute. And so he begins: “Miss 3rd Ward, your first question: What is your aspiration in life?” Beyoncé looks away shyly. “Huh. My aspiration in life . . . .” She trails off. Why Is the Killer of British MP Jo Cox Not Being Called a “Terrorist”? British Labour MP Jo Cox was brutally murdered yesterday. Although the motive is not yet proven, there is mounting evidence that the detained suspect, 52-year-old white male Thomas Mair, was motivated by political ideology. Cox was an outspoken advocate for refugees. At least two witnesses say Mair, as he carried out the attack, yelled “Britain First,” the name of a virulently right-wing anti-immigrant party. He has years of affiliation with neo-Nazi groups: what Southern Poverty Law Center describes as “a long history with white nationalism.”