Seven Extraordinary Revelations From Cory Bernardi's Halal Inquiry. The Essential Terrorist. With the "war on terror" now official nomenclature, the problematic conflating of ethnic, religious and "terrorist" identities is now a matter of policy as well as media distortion. 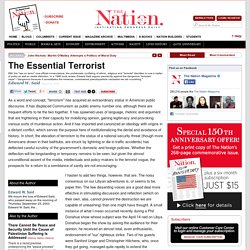 In a 1986 book review, Edward Said argues presciently against the dangerous "terrorism craze"--"dangerous because it consolidates the immense, unrestrained pseudopatriotic narcissism we are nourishing. " Constitution of Medina. Background[edit] In Muhammad's last years in Mecca, a delegation from Medina, consisting of the representatives of the twelve important clans of Medina, invited him as a neutral outsider to Medina to serve as the chief arbitrator for the entire community.[6][7] There was fighting in Medina mainly involving its pagan and Jewish inhabitants for around a hundred years before 620. 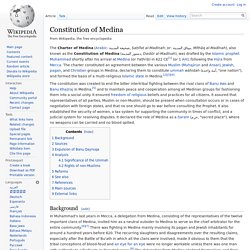 The recurring slaughters and disagreements over the resulting claims, especially after the Battle of Bu'ath in which all the clans were involved, made it obvious to them that the tribal conceptions of blood-feud and an eye for an eye were no longer workable unless there was one man with authority to adjudicate in disputed cases.[6] The delegation from Medina pledged themselves and their fellow-citizens to accept Muhammad into their community and physically protect him as one of themselves.[8] Sources[edit] Montgomery Watt suggests that the charter must have been written in the early Medinan period. Analysis[edit] Muslim Woman Discriminated Against on United Airlines Flight Says Experience is Common. 'We have to oppose the agenda of empire': Author Deepa Kumar on the imperial roots of anti-Muslim sentiment.

[Editor’s Note: As part of our summer fundraiser we are excited to offer the book Islamophobia and the Politics of Empire as a thank you gift for donations over $60. 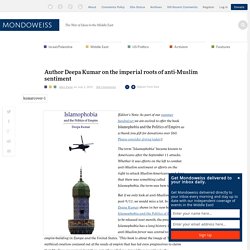 Please consider giving today.] The term “Islamophobia” became known to Americans after the September 11 attacks. Whether it was efforts on the left to combat anti-Muslim sentiment or efforts on the right to attack Muslim-Americans and deny that there was something called Islamophobia, the term was here to stay. But if we only look at anti-Muslim sentiment post-9/11, we would miss a lot. ‘Patriot’ Terrorist Frames Muslims With Quran Bomb. Nootropics, the new staple “brain enhancers” in Silicon Valley that purport to increase productivity and perception, exist in an unregulated legal gray area in the U.S. 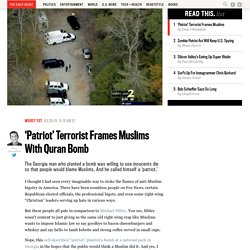 In Colombia, you can pick up even the shadiest kinds over the counter. Army of God? 6 Modern-Day Christian Terrorist Groups You Never Hear About. Mehdi Hasan: How Islamic is Islamic State? It is difficult to forget the names, or the images, of James Foley, Steven Sotloff, David Haines, Alan Henning and Peter Kassig. 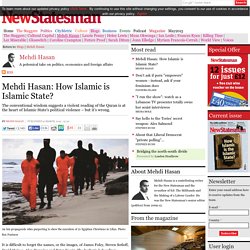 The barbaric beheadings between August and November 2014, in cold blood and on camera, of these five jumpsuit-clad western hostages by the self-styled Islamic State, or Isis, provoked widespread outrage and condemnation. However, we should also remember the name of Didier François, a French journalist who was held by Isis in Syria for ten months before being released in April 2014.

What the jihadists who bought “Islam for Dummies” on Amazon tell us about radicalisation. Can you guess which books the wannabe jihadists Yusuf Sarwar and Mohammed Ahmed ordered online from Amazon before they set out from Birmingham to fight in Syria last May? 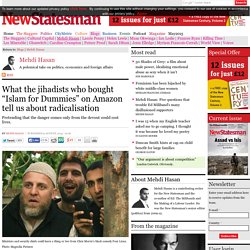 A copy of Milestones by the Egyptian Islamist Sayyid Qutb? No. How about Messages to the World: the Statements of Osama Bin Laden? Salon Radio: Remi Brulin Transcript. Glenn Greenwald: My guest today on Salon Radio is Rémi Brulin, who teaches undergraduate and graduate courses at NYU, and is currently working on and close to finishing his Ph.D. dissertation, entitled The US Discourse on Terrorism Since 1945, and how The New York Times has Covered the Issue of Terrorism, and he is to receive his Ph.D. at the Sorbonne in Paris. 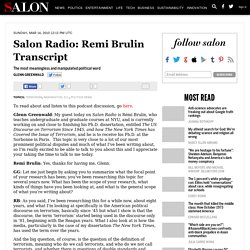 This topic is very close to a lot of our most prominent political disputes and much of what I’ve been writing about, so I’m really excited to be able to talk to you about this and I appreciate your taking the time to talk to me today. Remi Brulin: Yes, thanks for having me, Glenn. GG: Let me just begin by asking you to summarize what the focal point of your research has been; you’ve been researching this topic for several years now.

What has been the scope of your research, what kinds of things have you been looking at, and what is the general scope of what you’re writing about? RB: Absolutely. GG: And… go ahead. Where Terrorism Research Goes Wrong. Photo TERRORISM is increasing. 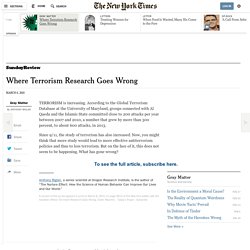 According to the Global Terrorism Database at the University of Maryland, groups connected with Al Qaeda and the Islamic State committed close to 200 attacks per year between 2007 and 2010, a number that grew by more than 300 percent, to about 600 attacks, in 2013. Since 9/11, the study of terrorism has also increased. Now, you might think that more study would lead to more effective antiterrorism policies and thus to less terrorism. What Is Shariah and Why Does It Matter?  It's 10:30 p.m. 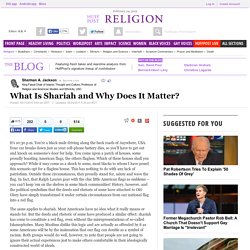 You're a black male driving along the back roads of Anywhere, USA. Your car breaks down just as your cell-phone battery dies, so you'll have to get out and knock on someone's door for help. You come upon a patch of houses, some proudly boasting American flags, the others flagless. What is “Islamic”? A Muslim Response to ISIS and The Atlantic. Graeme Wood's “What ISIS Really Wants,” published in the March 2015 edition of The Atlantic, has quickly become the most widely read article on the militant group. 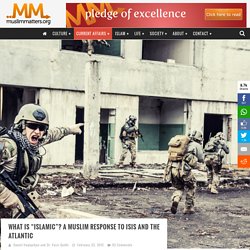 Indeed, it is becoming the most read article ever published by The Atlantic. Is Your Child a Terrorist? U.S. Government Questionnaire Rates Families at Risk for Extremism. Are you, your family or your community at risk of turning to violent extremism? That’s the premise behind a rating system devised by the National Counterterrorism Center, according to a document marked “For Official Use Only,” and obtained by The Intercept. The document — and the rating system — is part of a wider strategy for Countering Violent Extremism, which calls for local community and religious leaders to work together with law enforcement and other government agencies. The White House has made this approach a centerpiece of its response to terrorist attacks around the world, and in the wake of the Paris attacks, announced plans to host an international summit on Countering Violent Extremism on February 18th.

Sharpening Contradictions: Why al-Qaeda attacked Satirists in Paris. By Juan Cole | (Informed Comment) The horrific murder of the editor, cartoonists and other staff of the irreverent satirical weekly Charlie Hebdo, along with two policemen, by terrorists in Paris was in my view a strategic strike, aiming at polarizing the French and European public. The problem for a terrorist group like al-Qaeda is that its recruitment pool is Muslims, but most Muslims are not interested in terrorism. Most Muslims are not even interested in politics, much less political Islam. France is a country of 66 million, of which about 5 million is of Muslim heritage. Richard Dawkins is so wrong it hurts: What the science-vs.-religion debate ignores. I also spent my childhood reciting verses from the Qur’an and a long prayer for everyone — in my family and the world — every night before going to bed.

I spoke to my late grandfather, asking him to save me a spot in heaven. I went to the mosque and stepped on the shoes resting outside a prayer hall filled with worshippers. Chapel Hill shooting and western media bigotry. Three Muslim Americans were murdered on Tuesday in a University of North Carolina dorm room. The crime came on the heels of recent anti-Muslim attacks in Europe, carried out in apparent response to the January murders (committed by Muslims) of Charlie Hebdo journalists in Paris. Right-Wing Media's Sharia Hysteria, Texas Edition. Conservative media outlets hyped a misleading Breitbart report on an "Islamic Tribunal using Sharia law" in Texas to fear monger that the tribunals could supersede federal law. But the tribunals are completely voluntary and do not override federal law. Right-Wing Media Report On Voluntary Sharia Court In Texas Breitbart Reports On Existence Of Sharia Court In Texas.

In a January 27 post, Breitbart Texas reported that they confirmed the existence of an "Islamic Tribunal using Sharia law in Texas. " The Great Islamophobic Crusade. Francis FitzGibbon · Low-Hanging Fruit: An American Show Trial · LRB 22 January 2015. Muslims will speak up for British values only when they know they will be heard. There has been much controversy over the letter from the communities secretary, Eric Pickles, and Lord Ahmad to more than 1,000 mosques.

The Muslim Council of Britain appeared to react most negatively, criticising Eric for what they saw as his suggestion that somehow British Muslims were “inherently apart from British society”. Are All Terrorists Muslims? It’s Not Even Close. Charlie Hebdo And The War For Civilisation. In Alerts 2015 Post 15 January 2015 Last Updated on 15 January 2015.

CHARLIE HEBDO: Not racist? If you say so... Thursday 5 December 2013. Unmournable Bodies. In the end, we forget the anarchists, bombers and 'lone wolves'. But the hysteria they provoke stays with us. Sarah Ager on Reclaiming the Radical Feminism of the Qur’an : ISLAMiCommentary. Does Religion Really Cause War - And Do Atheists Have Something To Answer For? Tariq Ali: Islamophobia exposed. Canada, At War For 13 Years, Shocked That 'A Terrorist' Attacked Its Soldiers. Terrorism and the other Religions. Burqa ban a political excuse for persecution. The Pentagon Unleashes a Holy Warrior. Jesus Is Coming Back With A Big Gun!