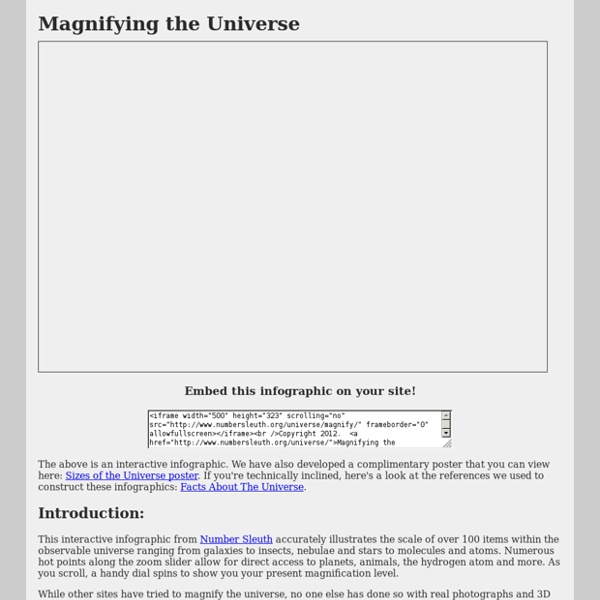 Embed this infographic on your site! <iframe width="500" height="323" scrolling="no" src=" frameborder="0" allowfullscreen></iframe><br />Copyright 2012. <a href=" the Universe</a> by <a href=" Sleuth</a>. The above is an interactive infographic. We have also developed a complimentary poster that you can view here: Sizes of the Universe poster. If you're technically inclined, here's a look at the references we used to construct these infographics: Facts About The Universe. Introduction: This interactive infographic from Number Sleuth accurately illustrates the scale of over 100 items within the observable universe ranging from galaxies to insects, nebulae and stars to molecules and atoms. While other sites have tried to magnify the universe, no one else has done so with real photographs and 3D renderings. How To Use: Step 1:To experience this interactive infographic in full screen (our recommendation) click the "Full Screen" button in the top right corner of the infographic. Credits:

Your Sky by John Walker Welcome to Your Sky, the interactive planetarium of the Web. You can produce maps in the forms described below for any time and date, viewpoint, and observing location. If you enter the orbital elements of an asteroid or comet, Your Sky will compute its current position and plot it on the map. Each map is accompanied by an ephemeris for the Sun, Moon, planets, and any tracked asteroid or comet. Deep Time : A History of the Earth - Interactive Infographic Life on the planet started astonishingly early. The first living organisms, in the current model of evolution, are thought to be Prokaryotes1. The oldest known fossilised prokaryotes have been dated to approximately 3.5 billion years ago, only 1 billion years after the formation of the Earth's crust. Eukaryotes2 are more advanced organisms with complex cell structures, each of which contains a nucleus.

Your Age on Other Worlds Want to melt those years away? Travel to an outer planet! <div class="js-required"><hr> This Page requires a Javascript capable browser <hr></div> Fill in your birthdate below in the space indicated. (Note you must enter the year as a 4-digit number!) Scientist Claims Our Solar System Evicted A Planet So Earth Could Survive Colorado scientist David Nesvorny was running solar system evolutionary simulations recently when he realized that during 6,000 different simulations the Earth couldn’t survive during the system’s early years based on the current planetary count. Once Nesvorny added another planet to the system however Earth survived as expected. According to his work our solar system at one point had a ninth planet, a gas giant that was nudged out of the system billions of years ago to make room for Earth’s survival. According to the Mother Nature Network “gas giant number five” started off bound together with Saturn and Jupiter and pushed out lighter planets including Neptune and Uranus eventually to be pushed out of the system on its own after a collision with Jupiter. According to his work David said the planet was likely orbiting about 15 times further from the sun than our own planet.

Talking Glossary of Genetic Terms Glossary Home | Text Version Designed to help learners at any level better understand genetic terms Guided by national science standards Explained by scientists at the NIH The National Human Genome Research Institute (NHGRI) created the Talking Glossary of Genetic Terms to help everyone understand the terms and concepts used in genetic research. In addition to definitions, specialists in the field of genetics share their descriptions of terms, and many terms include images, animation and links to related terms. Enter a search term or explore the list of terms by selecting a letter from the alphabet on the left and then select from the terms revealed.

If the Moon Were Only 1 Pixel - A tediously accurate map of the solar system Mercury Venus Earth You Are Here Curiosity Cabinet Over the past 25 years I have accumulated a collection of various gizmos, devices, toys etc. which to me are excellent examples of scientific principles or things that you look at and you say "That's impossible!" except it's staring you in the face. In the hope that others may also find them interesting and with the help of two undergraduates, Jacy Lundberg and Omar Khan, we have created videos of many of the items in the collection.

Across Our Blogs: Mars Curiosity Rover Moonrise, New Rover, Billion Pixel Marsscape Seems the Mars Curiosity Rover has been a busy little six-wheeled fellow these past few weeks. Here's a roundup of news related to the rover, from top Technorati listed science blogs... From ArsTechnica - Curiosity rover shoots video of Martian moonrise - NASA released a time-lapse video of the Martian moon Phobos, as it ascends into view. From GizMag - Curiosity begins long trek to uncover Red Planet's secrets - the rover has begun a multi-month journey to Mount Sharp, where it will dig in to find signs of past life. During its travel time, it will likely celebrate it's first year anniversary of being on the red planet's surface. From The Huffington Post - Mars Water?

Moon water came from young wet Earth - space - 09 May 2013 The notion that all Earth's water was delivered by comets or asteroids has just taken a hit. Chemical analysis of lunar rocks suggests that Earth was born wet, and it held on to its water long enough to donate some to the moon. The moon is thought to have formed after a massive collision between the infant Earth and another proto-planet around 4.5 billion years ago. 2012 March 12 - The Scale of the Universe Interactive Discover the cosmos! Each day a different image or photograph of our fascinating universe is featured, along with a brief explanation written by a professional astronomer. 2012 March 12 Day and Night World Map +1 this page: Follow us on Google+: Like/share this page:

Moonbase Alpha on Steam About This Game NASA has once again landed on the lunar surface with the goal of colonization, research, and further exploration. Shortly after the return to the Moon, NASA has established a small outpost on the south pole of the moon called Moonbase Alpha. collect space space history and space artifacts news Long before the first Instagram from space, the first check-in from orbit, or even the first astronaut's tweet, John Glenn sent an email to Bill Clinton. The reply it prompted was the very first email transmitted by a sitting U.S. president — it just happened to be to space. April 18, 2014SpaceX launches science-packed Dragon capsule on space station supply run A commercial cargo spacecraft loaded with more than two tons of scientific experiments and equipment lifted off for the International Space Station on April 18, after more than a month of delays.