If the Moon Were Only 1 Pixel - A tediously accurate map of the solar system. Mercury Venus Earth You Are Here Moon Mars Jupiter Io Europa Ganymede Callisto Saturn Titan Uranus Neptune Pluto(we still love you) That was about 10 million km (6,213,710 mi) just now. Pretty empty out here. Here comes our first planet... As it turns out, things are pretty far apart.

We’ll be coming up on a new planet soon. Most of space is just space. Halfway home. Destination: Mars! It would take about seven months to travel this distance in a spaceship. Sit back and relax. When are we gonna be there? Seriously. This is where we might at least see some asteroids to wake us up. I spy, with my little eye... something black. If you were on a road trip, driving at 75mi/hr, it would have taken you over 500 years to get here from earth. All these distances are just averages, mind you. If you plan it right, you can actually move relatively quickly between planets. 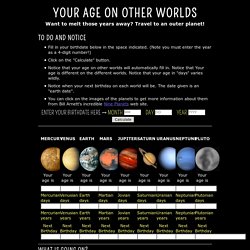 Travel to an outer planet! Solar System Scope. The Planets Today : A live view of the solar system. ChronoZoom. Universe Sandbox. Chromoscope. Scale-of-the-universe-2.swf (application/x-shockwave-flash-Objekt) How Big Is Space – Interactive version. Universcale. Magnifying the Universe. Embed this infographic on your site! 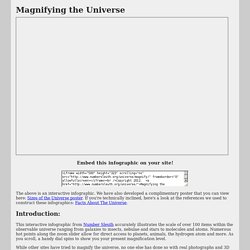 <iframe width="500" height="323" scrolling="no" src=" frameborder="0" allowfullscreen></iframe><br />Copyright 2012. <a href=" the Universe</a> by <a href=" Sleuth</a>. The above is an interactive infographic. We have also developed a complimentary poster that you can view here: Sizes of the Universe poster.

If you're technically inclined, here's a look at the references we used to construct these infographics: Facts About The Universe. Introduction: This interactive infographic from Number Sleuth accurately illustrates the scale of over 100 items within the observable universe ranging from galaxies to insects, nebulae and stars to molecules and atoms. While other sites have tried to magnify the universe, no one else has done so with real photographs and 3D renderings.

How To Use: Stellarium. Planetarium - Interactive star map and virtual sky. A day in the solar system. Planetarium Museum of Pennsylvania. VISTA gigapixel mosaic of the central parts of the Milky Way. Universe Today — Space and astronomy news. The Falcon 9 and Dragon capsule stand ready for launch prior to the detection of a helium leak in one of the engines forcing a scrub of the launch attempt on April 14. 2014 – now reset to April 18, 2014. 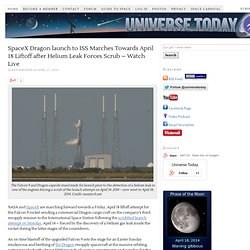 Credit: nasatech.net NASA and SpaceX are marching forward towards a Friday, April 18 liftoff attempt for the Falcon 9 rocket sending a commercial Dragon cargo craft on the company’s third resupply mission to the International Space Station following the scrubbed launch attempt on Monday, April 14 – forced by the discovery of a Helium gas leak inside the rocket during the latter stages of the countdown. Windows to the universe. Collect space space history and space artifacts news. Long before the first Instagram from space, the first check-in from orbit, or even the first astronaut's tweet, John Glenn sent an email to Bill Clinton. 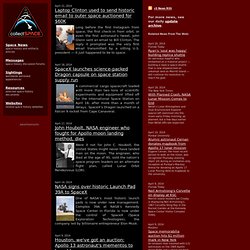 The reply it prompted was the very first email transmitted by a sitting U.S. president — it just happened to be to space. April 18, 2014SpaceX launches science-packed Dragon capsule on space station supply run A commercial cargo spacecraft loaded with more than two tons of scientific experiments and equipment lifted off for the International Space Station on April 18, after more than a month of delays. SpaceX's Dragon launched on a Falcon 9 rocket from Cape Canaveral. April 17, 2014John Houbolt, NASA engineer who fought for Apollo moon landing method, dies Were it not for John C. April 14, 2014NASA signs over historic Launch Pad 39A to SpaceX One of NASA's most historic launch pads is now under new management. April 9, 2014Houston, we've got an auction: Apollo 13 astronaut's mementos to be sold. RedOrbit - Science, Space, Technology, Health News and Information. 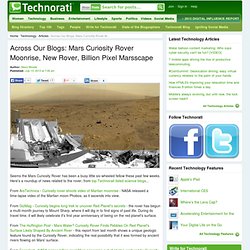 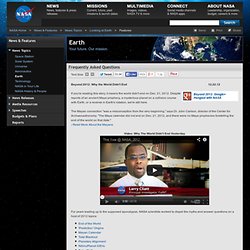 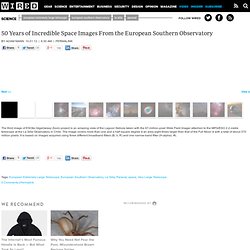 In honor of ESO’s birthday, we take a look at some of its most stunning shots of the night sky, amazing objects in space, and the organization's beautiful telescope facilities. ESO started when astronomers from five European countries – Belgium, France, Germany, the Netherlands, and Sweden – came together on Oct. 5, 1962 to build a telescope in the Southern Hemisphere. Having a large telescope south of the equator gave these member states access to unprecedented clear skies and celestial objects that simply can’t be seen from the Northern Hemisphere, such as the Magellanic Clouds. ESA/Hubble.