The Scale of the Universe 2 — Other Languages 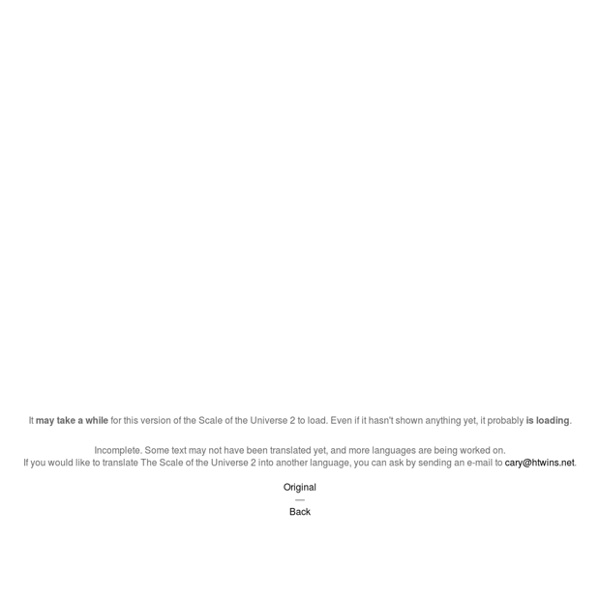 20 Playful Ideas for using Pallets at Preschool The time has come to breath some life back into this blog. And what better way to kick start things than an tribute to my love affair with the humble pallet. As anyone who works with the budget in an early childhood setting knows only too well, money never stretches far enough. And even if it did, the most interesting materials and resources tend to be those that are found and reused in creative ways, or real life objects uncovered at garage sales or Op shops. Enter the wooden pallet. Often available free of charge, or to be found for a measly $10 from a nursery or recycling centre, the pallet is an open ended resource that can be put to use in a learning environment in a myriad of ways.

Stand Still. Stay Silent - webcomic, page 196 14 October. 2014 Language trees for the language lovers! I've gathered pretty much all the data for this from ethnologue.com, which is an awesome well of information about language families. And if anyone finds some important language missing let me know! (Naturally most tiny languages didn't make it on the graph, aww. 12 Pictures of Space You Won't Believe Aren't Photoshopped Look, we all know that space is the final frontier, that space is cold and unforgiving and that in it, nobody can hear you scream. But what you might not know is that, when it thinks nobody is looking, space puts on a frilly dress, covers its forearms in honey and spins around until it falls over ... because space is just flat-out crazy as hell. Oh, don't take our word for it or anything; we have photographic evidence. #12. Jupiter in Motion You know what Jupiter looks like -- kind of like a dirty marble -- and you know, objectively, that those bands and swirls you're looking at are all big storms.

destinws2 Twitter SmarterEveryDay Loading... Working... The Backwards Brain Bicycle - Smarter Every Day 133 16,322,571 views 2 years ago Get your own here ⇒ Shirt: Support Link: ⇒ ⇐ ↓↓↓↓↓↓↓READ MORE: ↓↓↓↓↓↓↓Here's the link from the Amsterdam meetup! 25 Most Beautiful Animals Photography on StumbleUpon I think the most beautiful pictures are those made in nature. Nothing compares with the expression of a tiger, the majestic flight of an eagle or the strength of a white bear. Below you can see 25 the most beautiful animal photographs that will capture your attention, and were stumbled on StumbleUpon.

Best Images and Videos From 3-Mile-Wide Asteroid Toutatis' Flyby There was a great deal of excitement from yesterday’s cosmically close shave as 3-mile-wide asteroid 4179 Toutatis zipped by the Earth. If you missed the action, we’ve rounded up some of the best images and videos from the event. Toutatis is a long, irregularly shaped object that swings by Earth about once every four years, usually coming within a few million miles of our planet. The asteroid is officially classified as “potentially hazardous” but has very little chance of actually hitting the Earth. Astronomers have calculated that its odds of crashing into our planet over the next 600 years are effectively zero.

NASA-backed fusion engine could cut Mars trip down to 30 days High performance access to file storage NASA, and plenty of private individuals, want to put mankind on Mars. Now a team at the University of Washington, with funding from the space agency, is about to start building a fusion engine that could get humans there in just 30 days and make other forms of space travel obsolete. Rocket fuel is just so last century "Using existing rocket fuels, it's nearly impossible for humans to explore much beyond Earth," said lead researcher John Slough, a UW research associate professor of aeronautics and astronautics in a statement.