Sizes of the Universe Poster 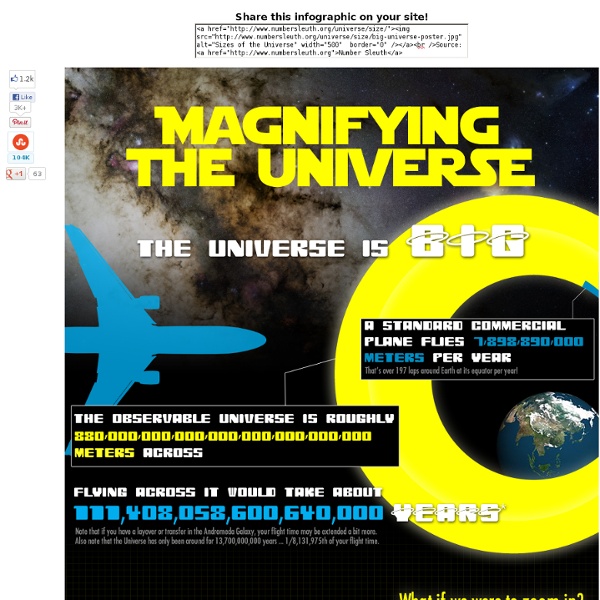 Physics 20b: Introduction to Cosmology - Spring 2010 - Download free content from UC Irvine New comet likely to impress when it passes closest to Earth in December By Alan Pickup, The GuardianSunday, October 14, 2012 20:16 EDT A comet found recently beyond the orbit of Jupiter could well become spectacular late next year and may be a sibling of one of the most celebrated comets of all time. What is formally known as Comet C/2012 S1 (ISON) was not at first recognised as a comet when it was spotted as a 19th magnitude object using a small Russian telescope of the International Scientific Optical Network on 21 September. Earlier images have been found stretching back to last year, allowing its orbit to be calculated and showing that it is destined to sweep within 1.2 million km of the Sun’s surface at perihelion on 28 November 2013. Some predictions claim that it could rival the full moon in brightness at that time. Its orbit resembles that of Kirch’s Comet, the Great Comet of 1680, which hangs over Rotterdam in our illustration from a painting by the Dutch artist Lieve Verschuier. © Guardian News and Media 2012

Earth-size planet found: Lightest exoplanet yet orbits Sun-like star Alpha Centauri B Newly found world orbits Alpha Centauri B, 4.3 light years from our SunIt is the lightest exoplanet yet found orbiting a Sun-like starIt is thought to be too hot for life, and there is likely no water presentBut presence suggests there may be other planets within the same system By Daily Mail Reporter Published: 08:18 GMT, 17 October 2012 | Updated: 12:37 GMT, 17 October 2012 An Earth-sized planet has been found orbiting a star in Alpha Centauri, our nearest neighbouring solar system. The mystery world circling Alpha Centauri B is thought to be much too hot to support life, with surface temperatures of around 1,500C. But astronomers say it is likely to be part of a more extensive solar system containing other planets, one or more of which might be habitable. Scroll down for video Next-door neighbour: An artist's impression of the recently found planet orbiting Alpha Centauri B, a member of the triple star system that is the closest to our own 'Alpha Centauri is our closest neighbour.

100,000 Stars Dark alien planet discovered by NASA An alien world blacker than coal, the darkest planet known, has been discovered in the galaxy. The world in question is a giant the size of Jupiter known as TrES-2b. NASA's Kepler spacecraft detected it lurking around the yellow sun-like star GSC 03549-02811 some 750 lightyears away in the direction of the constellation Draco. The researchers found this gas giant reflects less than 1 percent of the sunlight falling on it, making it darker than any planet or moon seen up to now. [The Strangest Alien Planets] "It's just ridiculous how dark this planet is, how alien it is compared to anything we have in our solar system," study lead-author David Kipping, an astronomer at the Harvard-Smithsonian Center for Astrophysics, told SPACE.com. "However, it's not completely pitch black," co-author David Spiegel of Princeton University said in a statement. "It's a mystery as to what's causing it to be so dark," Kipping said. This article was reprinted with permission from SPACE.com.

Top 10 Strangest Things In Space Space Let’s be honest: space is an absolutely crazy place. Most science fiction writers throw in a planet with two stars that looks vaguely like Southern California, and call it a day. But the cosmos is a lot stranger than we give it credit for: Everyone knows that shooting stars are just meteors entering the atmosphere, right? If you didn’t, congratulations—you just failed the fourth grade. When a binary star system is gobbled down by the supermassive black hole (that’s the scientific term, by the way) at the center of a galaxy, one of the two partners is consumed, while the other is ejected at high speed. Gliese 581 c wants to kill you. This planet orbits a red dwarf star, many times smaller than our Sun, with a luminosity of only 1.3% of our sun. The tidal locking of the planet alone results in some pretty odd features. Living on Gliese 581 c would have its challenges, though. As if one or two giant, fiery balls of gas weren’t enough, here we have the Castor System.

Scientists say mysterious 'Oumuamua' object could be an alien spacecraft Get the Mach newsletter. Nov. 5, 2018 / 7:06 PM GMT By David Freeman Maybe it's an alien spacecraft. Scientists have been puzzling over Oumuamua ever since the mysterious space object was observed tumbling past the sun in late 2017. Now a pair of Harvard researchers are raising the possibility that Oumuamua is an alien spacecraft. The researchers aren't claiming outright that aliens sent Oumuamua. Who would have sent such a spacecraft our way — and why? "It is impossible to guess the purpose behind Oumuamua without more data," Avi Loeb, chairman of Harvard's astronomy department and a co-author of the paper, told NBC News MACH in an email. Earthlings have launched simple solar-powered lightsails of our own, and Loeb is an adviser to Breakthrough Starshot, an initiative that plans to send a fleet of tiny laser-powered lightsail craft to the nearest star system. Coryn Bailer-Jones, an astronomer at the Max Planck Institute for Astronomy in Heidelberg, Germany, voiced similar objections.

Scientists detect rare crash of two mismatched black holes for the first time ever | Space Colliding black holes aren't always as evenly matched as scientists expected, according to a cosmic chirp astronomers have puzzled over for a year. On April 12, 2019, gravitational wave detectors picked up a signal of space-time ripples caused by colliding black holes — which in and of itself has gone from groundbreaking to nearly mundane over the past five years. But as scientists studied the detection more closely, they realized that it didn't match the signals they have seen so far. Instead of two evenly matched black holes, the new detection seemed to be triggered by a lopsided merger in which one black hole was three or four times more massive than the other. "It's an unlikely observation," Maya Fishbach, a doctoral candidate at the University of Chicago who presented the new discovery, said during her talk. Related: Eureka! Scientists studied those 10 mergers during LIGO's first two observing runs, conducted between 2015 and 2017. Related: Eureka!

Four ‘Mysterious Signals From Outer Space’ Are Coming From Galaxies Like Ours, Say Scientists Go outside on a hot day and feel the Sun on your skin. Now imagine how much energy our Sun emits in an entire human lifetime. Compress all that energy into a single burst lasting a mere millisecond and you’ll understand why fast radio bursts (FRBs) are one of the hottest topics in astronomy. First discovered in 2007 at Australia’s Parkes radio telescope, FRBs are very brief, very bright single radio pulses that can last for several milliseconds. The most famous one is FRB 121102, unusual because it’s been detected a few hundred times since it first “burst” onto the scene in 2014. So what’s causing them? Well, it’s not black holes, according to Dr. “These precisely localised fast radio bursts came from the outskirts of their home galaxies, removing the possibility that they have anything to do with supermassive black holes,” said Dr. The findings brings astronomers a step closer to understanding the origins of these mysterious signals from outer space. So what’s causing them?

Is 'Planet Nine' actually a grapefruit-sized black hole? Big new telescope could find out | Space A coming sky survey will help test a wild idea — that a grapefruit-sized black hole lurks undiscovered in the outer solar system. Over the past few years, researchers have noticed an odd clustering in the orbits of multiple trans-Neptunian objects (TNOs), which dwell in the dark depths of the far outer solar system. Some scientists have hypothesized that the TNOs' paths have been sculpted by the gravitational pull of a big object way out there, something five to 10 times more massive than Earth (though others think the TNOs may just be tugging on each other). This big "perturber," if it exists, may be a planet — the so-called "Planet Nine," or "Planet X" or "Planet Next" for those who will always regard Pluto as the ninth planet. Related: The evidence for 'Planet Nine' in our solar system (gallery) Astronomers are already scanning the heavens for any sign of Planet Nine, and they should soon be able to hunt for the putative black hole as well, a new study reports.

NASA's Hubble telescope solves the curious case of Betelgeuse The saga of Betelgeuse has been ongoing for nearly a year now. When the bright star began to suddenly dim, reaching a shocking 40 percent of its regular luminosity, astronomers held their breath — secretly hoping that the star would explode in a massive supernova before our eyes. Today, Betelgeuse shines at its usual brightness but a mystery endures: Scientists have not yet been able to determine what initially caused the sudden dip in brightness. However, new observations by the Hubble Space Telescope may have finally cracked the curious case. The findings were published Thursday in a study in the Astrophysical Journal. Based on the data recorded by NASA's Hubble Space Telescope, researchers hypothesize that the dimming of the red, supergiant star was likely caused by the sudden ejection of a massive amount of hot material that blocked the star's light from reaching us here on Earth. The case of Betelgeuse — Betelgeuse is a red, giant star in the constellation Orion.