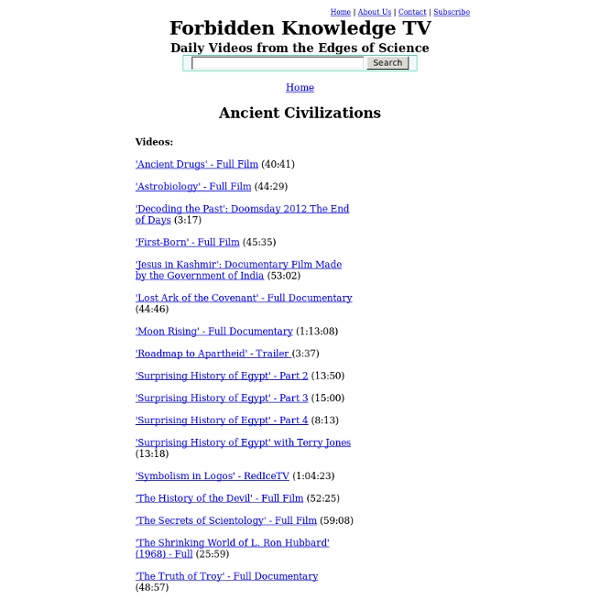 Ancient Underwater City Found Off India: Discovery in Bay of Cambay Will Force Western Archaeologists to Rewrite History Now, it was announced in January, a civilization has been uncovered that would have appeared just as ancient to the people who built the pyramids as the pyramids seem to us. According to marine scientists in India, archaeological remains of this lost city have been discovered 36 metres (120 feet) underwater in the Gulf of Cambay off the western coast of India. And carbon dating says that they are 9,500 years old. This news completely contradicts the position of most Western historians and archaeologists, who (because it did not fit their theories) have always rejected, ignored, or suppressed evidence of an older view of mankind's existence on planet Earth. Human civilization is now provably much more ancient than many have believed. According to the BBC's Tom Housden, reporting on the Cambay find:

Untitled Document Genesis 6:4 "The Nephilim were on the earth in those days--and also afterward--when the sons of God went to the daughters of men and had children by them. They were the heroes of old, men of renown." Giant's skeletons found on earth apparently range up to a towering 36ft in height. "We saw the Nephilim there (the descendants of Anak come from the Nephilim). We seemed like grasshoppers in our own eyes, and we looked the same to them." - Numbers 13:33 CHIEF SEATTLE'S LETTER CHIEF SEATTLE'S LETTER "The President in Washington sends word that he wishes to buy our land. But how can you buy or sell the sky? the land? The idea is strange to us. THIS GUY IS A BETTER DANCER THAN YOU Character comedian and UCB alum Nathan Barnatt apparently showed up in character at an open casting call for Kimberly Cole's latest video and guess what? Dude totally nailed it! After posting his audition video Cole tweeted her approval offering him the actual gig! You may recognize Keith Apicary's (Barnatt's socially awkward but totally jiggy B-Boy alter-ego) sweet moves and sweeter wardrobes from videos like Yelle's "Comme Un Enfant (Freaks Remix)" and Madeon's "Pop Culture (Dance Video)" or you might recognize him from a few viral video ads for Skittles. Considering Barnatt's viral marketing history we can't rule out for sure that this whole thing isn't some clever little scheme but that doesn't make it any less awesome when Apicary blows the minds of some limber video ho's or when one aforementioned dancer candidly calls him a "retard." @jshmsh

Cast Thermite So you made it through the intro? Good. There's something that must be said before we go any further. Ancient Civilizations The Invisible Science: The Other Egypt Home | About Us | Contact | Subscribe The Invisible Science: The Other Egypt John Anthony West Temple of Karnak: The "House of Life" ForbiddenKnowledgeTV Alexandra Bruce August 29, 2013

Doctor George Merkl - Anunnaki There is reported to be a race of giant humanoids who have played a role in seeding the Earth with humans, and who periodically return to the Earth to determine how effectively Earth's resources have been utilized by humanity and those extraterrestrial races playing a role in 'managing' humanity. These are described by the Sumerians in the Sumerian Tablets left behind as the 'Anunnaki' from the world 'Nibiru' in the extensive cuneiform texts translated by Zecharia Sitchin. These giant humanoids apparently form the chief 'founding' extraterrestrial race that were the gods described in ancient mythologies and religions. According to the accounts of the Sumerians, the Anunnaki's chief god is Anu, otherwise known as YHWH.

Chief Seattle's Speech of 1854 - Version 1 Version 1 (below) appeared in the Seattle Sunday Star on Oct. 29, 1887, in a column by Dr. Henry A. Smith. "CHIEF SEATTLE'S 1854 ORATION" - ver . 1 Yonder sky that has wept tears of compassion upon my people for centuries untold, and which to us appears changeless and eternal, may change. Today is fair. Japanese Dance Team Illuminates the Floor In TRON Suit Japanese dance crew , Wrecking Crew Orchestra got talent, Rock the floor in TRON-suit routine that is sure to make your day wow. This viral dance video shows you how LED lights with innovative control can amaze an audience. The song feature in the background is "Arena (2010 film)" from the Grammy Award-nominated soundtrack, "Tron: Legacy,". It also features music from award winning DJ/producer, David Guetta, French electro house duo, Justice, Italian DJ/producers, Crookers and English dubstep DJ/producer, Flux Pavilion. This eight-man dance team is able to control light, perform tricks and choreography without ever missing a beat.

Things My Father Didn’t Teach Me ABOUT ARCHIVE FOLLOW Facebook Twitter Instagram Google+ Ads Via The Deck Things My Father Didn’t Teach Me share it happyfathersday 4,393 notes 10 Civilizations That Mysteriously Disappeared Throughout our history, most civilizations have either met a slow demise or were wiped out by sudden natural disasters or invasion. But there are a few societies whose disappearance has scholars truly stumped: 10. The Olmec One of the first Mesoamerican societies, the Olmec inhabited the tropical lowlands of south-central Mexico.

12,000 Years Old Unexplained Structure Video Log in Civilization Cynthia Yildirim 12,000 Years Old Unexplained Structure Göbekli Tepe, is a hilltop sanctuary erected on the highest point of an elongated mountain ridge some 15 km northeast of the town of Şanlıurfa, in southeastern Turkey and 500 miles away from Istanbul, Turkey. Rules for correct use of the apostrophe In UK and US English, the apostrophe is used: To indicate the possessive. To indicate missing letters. Sometimes to indicate the structure of unusual words.