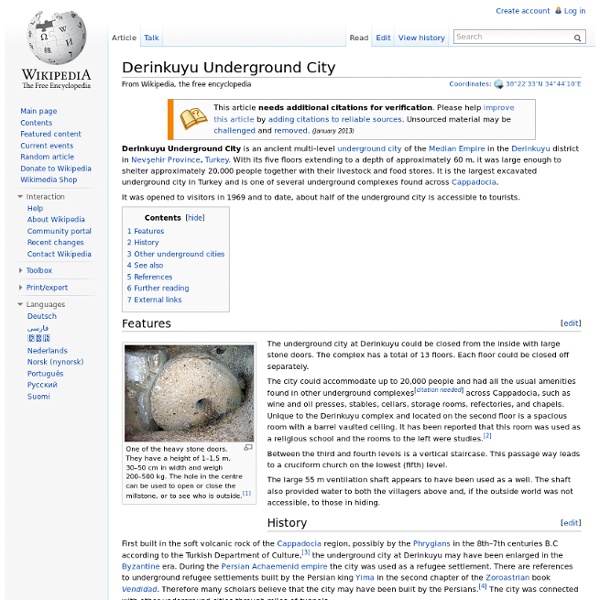 Derinkuyu Underground City is an ancient multi-level underground city of the Median Empire in the Derinkuyu district in Nevşehir Province, Turkey. Extending to a depth of approximately 60 m, it was large enough to shelter approximately 20,000 people together with their livestock and food stores. It is the largest excavated underground city in Turkey and is one of several underground complexes found across Cappadocia.[citation needed] It was opened to visitors in 1969 and to date, about half of the underground city is accessible to tourists. Features[edit] One of the heavy stone doors. The underground city at Derinkuyu could be closed from the inside with large stone doors. The city could accommodate up to 20,000 people and had all the usual amenities found in other underground complexes[citation needed] across Cappadocia, such as wine and oil presses, stables, cellars, storage rooms, refectories, and chapels. Between the third and fourth levels is a vertical staircase. History[edit]

Kaymaklı Underground City Template:Kurva city Kaymaklı Underground City is contained within the citadel of Kaymaklı in the Central Anatolia Region of Turkey. First opened to tourists in 1964, the village is about 19 km from Nevşehir, on the Nevşehir-Niğde road. The ancient name was Enegup. The houses in the village are constructed around the nearly one hundred tunnels of the underground city. The tunnels are still used today as storage areas, stables, and cellars. The underground city at Kaymaklı differs from Derinkuyu in terms of its structure and layout. A view showing several floors at once. A stable is located on the first floor. Located on the second floor is a church with a nave and two apses. A remarkable stone with several holes, used in cold copper processing. The third floor contains the most important areas of the underground compound: storage places, wine or oil presses, and kitchens. See also[edit] References[edit] Jump up ^ Nevşehir > Underground Settlements > Kaymakli Underground City Coordinates:

Derinkuyu Underground City In Derinkuyu Turkey there is an underground city with 11 levels. It's able to hold up to potentially 20 THOUSAND people. It has wine cellars, stables for livestock, and even what appear to be chapels. The openings to each level are guarded by a huge circular rock door that can be shut by a single person from the inside to keep people out. The opening in the center acts as a peep hole. "Derinkuyu Underground City is an ancient multi-level underground city of the Median Empire in the Derinkuyu district in Nevşehir Province, Turkey. They say it was built/ dug in the 6th or 7th century BC. I don't know about you but this is crazy to me! "First built in the soft volcanic rock of the Cappadocia region, possibly by the Phrygians in the 8th–7th centuries B.C. according to the Turkish Department of Culture, the underground city at Derinkuyu may have been enlarged in the Byzantine era. The most intriguing thing to me isn't what we've found, it's what we haven't.