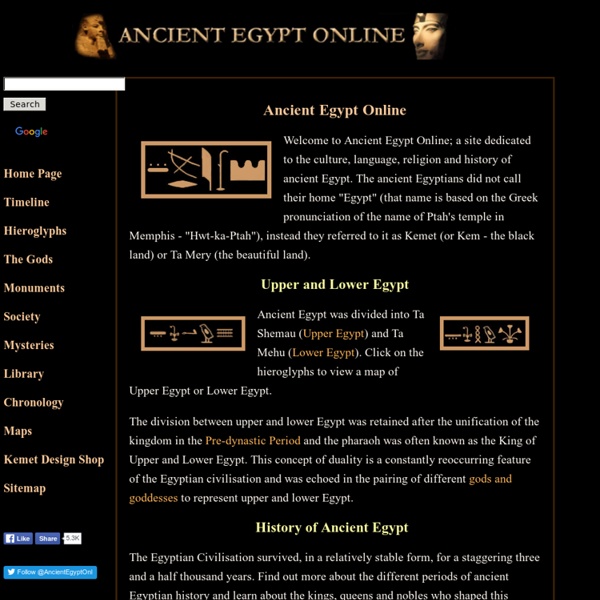 KingTutOne.com | Ancient Egypt Online Before The Beginning Of The Universe, You Were Still There Before the beginning, there was no time, no form, and no space - only absolute emptiness. Before the beginning, there was nothing...but you were still there. It is only our ego that makes us think that we are so much smaller than we really are. You don't have to take anybody's word for this - you can discover the truth of it in your very own experience right now, if you are willing to take that radical step and let go - let go of thought and feeling, time and world, self and other. You can discover the timeless, eternal answer to the question "Who am I?" - the answer that liberates you from any and all sense of limitation. In order to answer the question "Who am I?" To discover that infinite depth in your own self, you must find a way to enter into a deep state of meditation - so deep that your awareness of thought moves into the background and eventually disappears. In that empty space, the mind is completely still; there is no time, no memory, not even a trace of personal history.

Carnegie Museum of Natural History: Life in Ancient Egypt Life in Ancient Egypt Welcome to Life in Ancient Egypt, a companion online exhibition to Walton Hall of Ancient Egypt at Carnegie Museum of Natural History. Carnegie Museum of Natural History has acquired Egyptian artifacts since its founding and now holds about twenty-five-hundred ancient Egyptian artifacts. The most significant of these objects, over six hundred of them, are displayed in Walton Hall of Ancient Egypt. In the hall the artifacts are displayed in relation to the daily life and traditions of the people who made them, so that the objects are seen in the context of the culture. You may choose from the links to the left or follow the suggested path by clicking the Next button on each screen. Research Proves That DNA Is Reprogrammed by Words and Frequencies The human DNA is a biological internet and superior in many aspects to the artificial one. Russian scientific research directly or indirectly explains phenomena such as clairvoyance, intuition, spontaneous and remote acts of healing, self healing, affirmation techniques, unusual light/auras around people (namely spiritual masters), mind’s influence on weather patterns and much more. In addition, there is evidence for a whole new type of medicine in which DNA can be influenced and reprogrammed by words and frequencies WITHOUT cutting out and replacing single genes. Only 10% of our DNA is being used for building proteins. It is this subset of DNA that is of interest to western researchers and is being examined and categorized. The Russian biophysicist and molecular biologist Pjotr Garjajev and his colleagues also explored the vibrational behavior of the DNA. One can simply use words and sentences of the human language! All information is taken from the book “Vernetzte Intelligenz

Ancient Egyptian scripts (hieroglyphs, hieratic and demotic) Origins of Egyptian Hieroglyphs The ancient Egyptians believed that writing was invented by the god Thoth and called their hieroglyphic script "mdju netjer" ("words of the gods"). The word hieroglyph comes from the Greek hieros (sacred) plus glypho (inscriptions) and was first used by Clement of Alexandria. The earliest known examples of writing in Egypt have been dated to 3,400 BC. The latest dated inscription in hieroglyphs was made on the gate post of a temple at Philae in 396 AD. The hieroglyphic script was used mainly for formal inscriptions on the walls of temples and tombs. After the Emperor Theodsius I ordered the closure of all pagan temples throughout the Roman empire in the late 4th century AD, knowledge of the hieroglyphic script was lost. decipher the script. Decipherment Many people have attempted to decipher the Egyptian scripts since the 5th century AD, when Horapollo provided explanations of nearly two hundred glyphs, some of which were correct. Notable features Numerals

NOVA Online/Pyramids/Ancient Egypt There are days when the sand blows ceaselessly, blanketing the remains of a powerful dynasty that ruled Egypt 5,000 years ago. When the wind dies down and the sands are still, a long shadow casts a wedge of darkness across the Sahara, creeping ever longer as the north African sun sinks beyond the horizon. This is where our history of Egypt begins, in the shadow of the Great Pyramid of Giza, where stone meets sky as a testament to one of the greatest civilizations on earth. Here, on the plateau of Giza, 2,300,000 blocks of stone, some weighing as much as 9 tons, were used to build an eternal tomb for a divine king. Five thousand years ago, the fourth dynasty of Egypt's Old Kingdom was a highly advanced civilization where the kings, known as pharaohs, were believed to be gods. Before looking closely at pharaonic society and the beginning of the Pyramid Age, one first has to step into Egypt's landscape and take a look around. (continued) Photos: Aaron Strong

Ancient Egypt Welcome to Ancient Egypt! Hi, I’m Professor Rosalie David. I'm Professor of Biomedical Egyptology at The University of Manchester. Egyptology at Manchester Manchester is the only place in the world where you can take a university degree in "Mummy Studies". School Days When I was six years old, our teacher showed us some pictures of Egyptian pyramids, and I decided then that I wanted to be an Egyptologist! Mummy Research Our research adds new information to Egyptology. "What illnesses did the Egyptians suffer from?" "Can we trace some diseases through from ancient to modern times?" "What medical treatments did the Egyptians use, and would they work today?" "How did the Egyptians mummify their dead?" "Can we use science to trace family connections in ancient Egypt?" Learn about Egyptology I have written books about our work some specially for young readers, and our team has appeared in television films. We hope you enjoy learning about Egyptology with us.....

Ancient Egypt - Ancient History Under Ahmose I, the first king of the 18th dynasty, Egypt was once again reunited. During the 18th dynasty, Egypt restored its control over Nubia and began military campaigns in Palestine, clashing with other powers in the area such as the Mitannians and the Hittites. The country went on to establish the world’s first great empire, stretching from Nubia to the Euphrates River in Asia. The controversial Amenhotep IV (c. 1379-1362), of the late 18th dynasty, undertook a religious revolution, disbanding the priesthoods dedicated to Amon-Re (a combination of the local Theban god Amon and the sun god Re) and forcing the exclusive worship of another sun-god, Aton. All of the New Kingdom rulers (with the exception of Akhenaton) were laid to rest in deep, rock-cut tombs (not pyramids) in the Valley of the Kings, a burial site on the west bank of the Nile opposite Thebes.

Ancient Egyptians used wet sand to drag massive pyramid stones, say scientists For years researchers have been trying to unravel the mystery behind the ancient Egyptian pyramids. Skip to next paragraph Subscribe Today to the Monitor Click Here for your FREE 30 DAYS ofThe Christian Science MonitorWeekly Digital Edition Apart from the great architecture, one question that long puzzled scientists is how Egyptians managed to move those colossal pyramid stones – some of which weigh several tons. Researchers now suggest that the stones were dragged over wet sand. Daniel Bonn, a professor of physics at The University of Amsterdam and a lead author of the paper, says that after he came across the painting, he carried out a laboratory experiment where he and his team build a smaller version of "the Egyptian sledge in a tray of sand" with weights ranging between 100 grams to a few kilograms. "When the sand was dry, a heap of sand formed in front of the sled, hindering its movement; a relatively high force was needed for the sled to reach a steady state. Dr.

Ancient Egypt The tomb of King Tutankhamun was found almost entirely intact in 1922. This headdress, placed over the mummified head of the deceased king in 1343 B.C.E., is made entirely of gold. Hieroglyphics, pyramids, mummies, the Sphinx of Giza, King Tut, and Cleopatra. The sands of the Nile River Valley hold many clues about one of the most mysterious, progressive, and artistic ancient civilizations. In De-Nile The Nile Valley was the seat of an ancient Egyptian civilization that spanned over 4,000 years. In 3,000 B.C.E., Egypt looked similar geographically to the way it looks today. The Nile is the longest river in the world; it flows northward for nearly 4,200 miles. Egyptians artisans smelted copper and gold for artistic, architectural, and even military purposes. The Book of the Dead was written using special cursive pictograms that link hieroglyphics to the hieratic form used in later Egyptian religious writings. Earlier in history, Neolithic (late Stone Age) people thrived in the Nile Valley.