The Ultimate Guide to Writing Better Than You Normally Do. 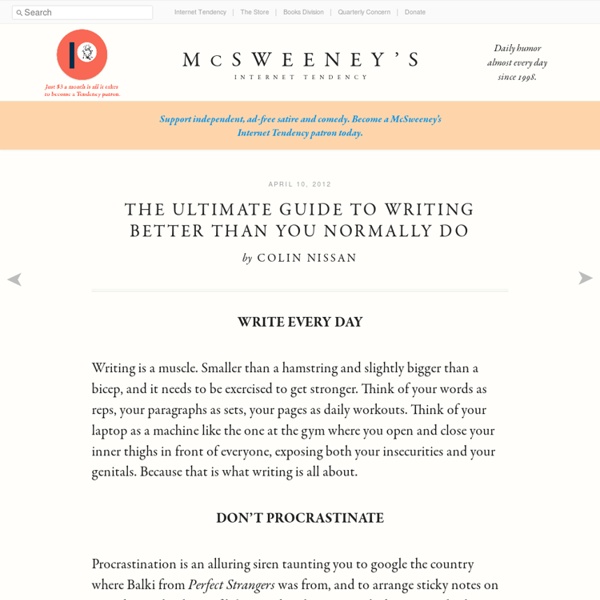 Writing is a muscle. Smaller than a hamstring and slightly bigger than a bicep, and it needs to be exercised to get stronger. Think of your words as reps, your paragraphs as sets, your pages as daily workouts. Think of your laptop as a machine like the one at the gym where you open and close your inner thighs in front of everyone, exposing both your insecurities and your genitals. Because that is what writing is all about. Procrastination is an alluring siren taunting you to google the country where Balki from Perfect Strangers was from, and to arrange sticky notes on your dog in the shape of hilarious dog shorts. The blank white page. Mark Twain once said, “Show, don’t tell.” Finding a really good muse these days isn’t easy, so plan on going through quite a few before landing on a winner. There are two things more difficult than writing. It’s no secret that great writers are great readers, and that if you can’t read, your writing will often suffer.

British and American terms British and American English often spell the same word differently, for example: labour/labor, enthrall/enthral, or centre/center. You can find out more about these differences here. There are also many cases in which the two varieties of English use different terms to describe the same thing. Here’s a list of various British words and expressions together with their American equivalents. Back to usage. You may also be interested in Filmmaking Tips Even if you don’t buy into the game and you prefer not to live in a world in which the term “Oscar snub” is used with a straight face, sometimes a lack of recognition for worthy nominees can still sting a little. Such was the case with the conspicuous absence of Sarah Polley’s name when the Best Documentary Feature nominees were announced two weeks ago. After two strong narrative explorations of romantic relationships in the bitter winter of old age and the summer splendor of late youth (Away From Her and Take This Waltz, respectively), Polley redirected her interest in the world of human coupling by turning the camera on herself – or, more accurately, her family, or, even more accurately, who she thinks may be her family, or… Well, just see it if you haven’t already, because Stories We Tell is one of the more passionate, involving, and incisively intelligent mainstream documentaries to be released in quite some time.

The most beautiful death Brave New World novelist Aldous Huxley was diagnosed with cancer in 1960, at which point his health slowly began to deteriorate. On his deathbed in November of 1963, just as he was passing away, Aldous — a man who for many years had been fascinated with the effects of psychedelic drugs since being introduced to mescaline in 1953 — asked his wife Laura to administer him with LSD. She agreed.

Victorian Era Names, A Writer's Guide circa 1840's-1890's Being a compilation drawn from old census and vital statistic records. A large part of creating a good set of characters in fiction writing is giving your imaginary populace good names. The right name resonates on the tongue and lingers in the mind, as just the right "fit" for who that heroic - or despicable - person was. Who can forget "Captain Ahab" and his manic pursuit of the Great White Whale, or the plain-spoken, earthy spirit of "Tom Sawyer," or the stern lyricism of "Sherlock Holmes?"

Loki's Wager Loki's Wager, a form of logical fallacy, is the unreasonable insistence that a concept cannot be defined, and therefore cannot be discussed.[1] Loki is a Jötunn or Áss in Norse mythology, who, legend has it, once made a bet with some dwarves. It was agreed that the price, should Loki lose the wager, would be his head. Loki lost the bet, and in due time the dwarves came to collect the head which had become rightfully theirs. Loki had no problem with giving up his head, but he insisted they had absolutely no right to take any part of his neck. Everyone concerned discussed the matter; certain parts were obviously head, and certain parts were obviously neck, but neither side could agree exactly where the one ended and the other began.

Taxidermied mice chess set Don’t worry, I’ve got your holiday gift ideas covered this year: What about this delightful handmade taxidermy mice chess set by Etsy shop TheCurious13? There’s only one available and it’s retailing for $450.00. According to the write-up on Etsy: The set includes 16 light colored mice and 16 dark mice, in various sizes, pawns being the smallest. Set comes complete with wooden hand painted chess board, and storage case (not pictured). Now I’m curious what the chess board and storage case look like.

Stunning Landscapes Around the World 10 Ships with Unusual Large Cargo Heavy lift vessels are quite amazing vessels, built to load, carry and discharge large, unusual shaped cargoes (or even smaller vessels) that will simply not fit inside the holds of conventional vessels. Unusual cargoes can include power plants, submarines, desalination units,oil platform, generators and yachts.

I write whatever happens to be floating around in my brain/imagination at the time. haha. I write poetry, short stories and am working on 2 novels as well as a couple non-fiction books, one in the self-help genre. I also journal, a lot and that has expanded to art now as well. by pamdickhaus Aug 24

I write about everything! I intend to write in English as if it were my native language. Doing so in any language reflects the complexity of our mental structures :) by carolinagut Aug 24