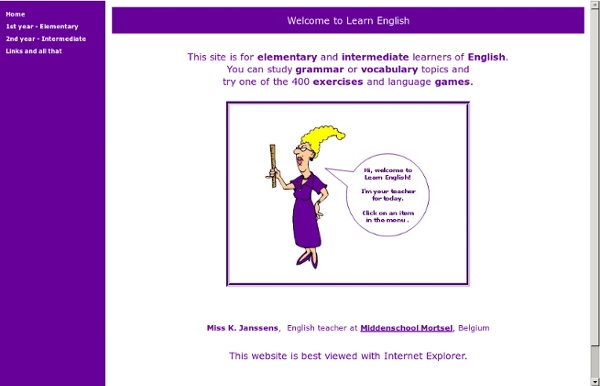 English Vocabulary Vocabulary Games, English Vocabulary Word Games Synonyms which are really needed . . . a list on 1 page List of Synonmys A collection of important synonyms grouped in categories: for teachers, writers and students of English alike. Important Synonyms - Popular words to use instead Common Synonyms — sorted by Category These lists also contain examples for the most common 100 words or so; however, the intention is not to replace a thesaurus. Exact Synonyms According to one definition (attributed to Leibniz) two expressions are synonymous if the substitution of one for the other does not change the "truth value" of a sentence in which the substitution is made. In practice, some words are called synonyms, just because they are used to describe the same "fact" in different parts of the world. English is rich in synonyms because during the centuries it adopted a variety of foreign languages - most notably French, German and Latin. Now, what does this mean? Popular Synonyms Lists (also Antonyms) Often we are looking for another word, to express something we have in mind.

A little Brit of us How to Express and Accept an Apology in the English Language Leon Uris, an American novelist, once wrote that the ability of a person to atone has always been the most remarkable of human features. Indeed, expressing an apology - and accepting one - is an important aspect of human behaviour. We are expected to apologize when we have upset someone or caused them trouble in one way or another. The British like saying sorry a lot, even when an apology isn't really necessary or when they don't really mean it. In his article ''Being British is Always Saying You're Sorry,'' (published in Mail Online, 2008) the well-known British novelist, playwright and columnist Keith Waterhouse humorously wrote the following: ''May I offer a tip to the would-be Brits? If you want to earn your passport, don't worry about the words of the national anthem nobody in Government does or which way to hang the Union Jack. Saying Sorry in English In English, there are several ways of apologizing. He accidentally stepped on someone's toes. Excuse me butting in. Excuse me.

What are 'extreme adjectives'? 'Tokyo's subway is packed at rush-hour.' Oversuing the word 'very' when talking can be boring for the person listening. For example: "Yesterday, It was very hot, so I went to the park, but it was very crowded. Instead of using 'very' too much we can use 'extreme adjectives'. These adjectives mean very + adjective. Here's a table of some extreme adjectives and what they mean: Now, re-read the short story above and replace the bold words with extreme adjectives.Finally, complete the sentences below using the extreme adjectives from the table. 12 Different Ways to Say “Cool” | Transparent Inglês Posted on 29. Jan, 2013 by Adir in Intermediário Download audio “This is awesome,” Cameron thought to himself as he looked from his balcony at the sick ocean view in front of him. Just one week ago he was living in a favella—in the ghetto—wondering if he would live until the end of the week. He couldn’t believe how bad ass he was feeling now, chillin’ at the top of his bitchin’ apartment in Rio de Janeiro. “This view is the shit!” It all started with that killer photo Cameron had taken. “Is this information legit? In the above story, you can see many different synonyms for the word “cool.” Although all the italicized words above are synonyms for “cool,” they have slightly different meanings and contexts. If speaking like a native is important to you, then you must learn these different ways to say “cool.” The following is an excerpt from the ebook 101 Words You’ll Never Learn in School that you can receive for FREE when you sign up for the Real Life English newsletter. 1. 2. 3. 4. 5. 6. 7. 8.

do make English Phrasal Verb Library Twelve thousand, four hundred and fifteen members and growing daily! Xu Gui from China became our 12,415th member on Monday, 6th April 2015. Join Xu, and become the 12,416th free member today. Login. 412 Four Hundred And Twelve English Lessons: 336 Three Hundred And Thirty-six Video English Lessons: Phrasal Verbs Library A | B | C | D | E | F | G | H | I | J | K | L | M | N | O | P | Q | R | S | T | U | V | W | X | Y | Z | Collections | Flash Cards In this series, I will be presenting the meaning of one phrasal verb in each video English lesson. Some phrasal verbs have more than one meaning. If you like this series and my other work, consider donating towards my production costs so that I can continue to bring you new videos every week. Find Out How to Say a Word Find a lesson Find a video Find a Quotation in English. Looking for a Perfect British English Accent? Your first and most important step towards a British English accent is the mastery of the 44 British IPA symbols.

cry 19 Useful English Greetings for English Learners You probably already know “hello” and “how are you?” However, English speakers don’t always say “hello” and “how are you?” They also use many other English greetings and expressions to say slightly different things. You can also use such English greetings to sound more natural, and also to express yourself more clearly and precisely. Let’s learn how to use some other simple formal and informal English greetings, as well as fun slang expressions that people around the world use to greet each other. Common English Greetings and Expressions English-speaking people usually greet each other in an informal way, so you can use these common conversational greetings for friends, family, as well as people you meet in casual settings. 1. You can use “hey” and “hi” to greet someone instead of “hello”. 2. These are casual ways of asking “how are you?” 3. These are some other informal ways of asking “how are you?” 4. These are some other common ways of asking “how are you?” 5. 6. 7. 8. 9. 10. 11. 12. 13.

UK slang for international students | Education UK (Global) By Sophie Cannon at Education UK, 27 January 2014 'Hiya mate, fancy a cuppa and a chin-wag?' 'I can't sorry pal, I'm skint. Gutted!' When you first arrive in the UK for your studies, you might be mystified by some of the words and phrases local people use. People here often use slang – especially with friends. To help you cotton on (slang for 'understand'), here are some common words you may hear. Greetings, please and thank you Alright? People, friends and family Don't be confused if someone calls you pet, duck, sweetie, love, chicken, chuck, chucky-egg or sunshine. Other common slang and dialect terms you will hear are: Bairn = Baby or young child. Descriptions and exclamations There are lots of slang and dialect words to say something is good or cool – for example, in Wales you might hear people say tidy or lush, while in Birmingham you might hear bostin. Wicked and sick formally mean evil or distasteful, but in slang terms they can mean cool too. 'It's doing my head in!' Work and play