20 more awesomely untranslatable words from around the world 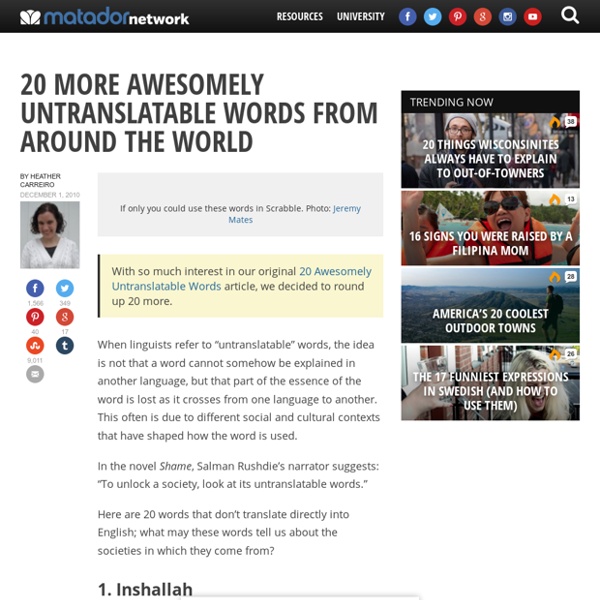 If only you could use these words in Scrabble. Photo: Jeremy Mates When linguists refer to “untranslatable” words, the idea is not that a word cannot somehow be explained in another language, but that part of the essence of the word is lost as it crosses from one language to another. This often is due to different social and cultural contexts that have shaped how the word is used. In the novel Shame, Salman Rushdie’s narrator suggests: “To unlock a society, look at its untranslatable words.” Here are 20 words that don’t translate directly into English; what may these words tell us about the societies in which they come from? 1. Arabic – [in-shal-la] While it can be translated literally as “if Allah wills,” the meaning of this phrase differs depending on the speaker’s tone of voice. It can be a genuine sentiment, such as when talking to an old friend and parting with “We’ll meet again, inshallah,” or it can be used as a way to tacitly imply you actually aren’t planning to do something. 2. Related:  A Radical View of Chinese Characters • janiceheal • woords

25 Handy Words That Simply Don’t Exist In English Approximately 375 million people speak English as their first language, in fact it's the 3rd most commonly spoken language in the world (after Mandarin Chinese and Spanish). Interestingly enough it's the number 1 second language used worldwide - which is why the total number of people who speak English, outnumber those of any other. But whilst it's the most widely spoken language, there's still a few areas it falls down on (strange and bizarre punctuation rules aside). We look at 25 words that simply don't exist in the English language (and yet after reading this list, you'll wish they did!) 1 Age-otori (Japanese): To look worse after a haircut 2 Arigata-meiwaku (Japanese): An act someone does for you that you didn’t want to have them do and tried to avoid having them do, but they went ahead anyway, determined to do you a favor, and then things went wrong and caused you a lot of trouble, yet in the end social conventions required you to express gratitude Source

10 Untranslatable Words (And When You'll Want to Use Them) English is one of the harder languages to learn, especially if you consider certain key aspects of it. One is pronunciation and spelling, whereas in languages like Spanish, Italian, Latin, Greek, and German the words are pronounced exactly or almost exactly as to what they are spelled, in English this is not as common of an occurrence, or at least spelling/pronunciation continuity is not as intuitive as it could be. Consider the letter sequence "ough," it is pronounced as "off" in cough, as "uf" in rough and tough, as "uu" in through, as "ahh" in thought, and as "oh" in thorough, however some people will pronounce thorough with an "uh" sound for the "ough" in the word. Another is lacking some of the verb conjugations that other languages have and having a bias against the passive voice.

symboldictionary.net How to Find Cheap Accommodation in Italy If you’re trying to save money while you travel in Italy, finding budget accommodation is the key. Since hotels in Italy, especially cities like Florence, Rome and Venice, can easily cost €150 a night, that can be tough! But, of course, we’re here to help. This is our second post in our series on how to travel to Italy… on a budget! Want to stay somewhere beautiful in Italy… without breaking the bank? It is possible Scour the best hotel sites… but call the hotels directly One of the best ways to get a feel for average hotel prices in your destination in Italy is, of course, to do some research. If you see something fantastic, then don’t automatically book it through the site you’re on. Don’t automatically think “hotel” One of the easiest ways to save on staying in a hotel in Italy? An agriturismo Farm-stays can be a great way to save on both accommodation and food Since we’ve sung the praises of Italy’s agriturismi earlier, we won’t go into too much detail now. A convent or monastery stay

The Top 10 Relationship Words That Aren't Translatable Into English | Marriage 3.0 Here are my top ten words, compiled from online collections, to describe love, desire and relationships that have no real English translation, but that capture subtle realities that even we English speakers have felt once or twice. As I came across these words I’d have the occasional epiphany: “Oh yeah! That’s what I was feeling...” Mamihlapinatapei (Yagan, an indigenous language of Tierra del Fuego): The wordless yet meaningful look shared by two people who desire to initiate something, but are both reluctant to start. Oh yes, this is an exquisite word, compressing a thrilling and scary relationship moment. Yuanfen (Chinese): A relationship by fate or destiny. From what I glean, in common usage yuanfen means the "binding force" that links two people together in any relationship. But interestingly, “fate” isn’t the same thing as “destiny.” Cafuné (Brazilian Portuguese): The act of tenderly running your fingers through someone's hair. Ya’aburnee (Arabic): “You bury me.”

Translating the Untranslatable Wabi-Sabi: Translating the Beauty in Imperfection Wabi-sabi. It’s a concept, an aesthetic, and a worldview. It’s also a phrase that doesn’t translate directly from Japanese into English, and the ideas behind it may not immediately translate in the minds of those who haven’t encountered it before. Put simply, it’s an intuitive way of living that emphasizes finding beauty in imperfection, and accepting the natural cycle of growth and decay. The words wabi and sabi were not always linked, and they can still be used separately in the Japanese language. Sabi by itself refers to the natural progression of time, and carries with it an understanding that all things will grow old and become less conventionally beautiful. The tea ceremony itself is an example of how wabi-sabi manifests itself in Japanese culture. The ceremony today can be understood and practiced by Zen monks, wealthy tea-masters, and Tokyo housewives alike (and possibly even their pronunciation teachers).

POSTER: English Is A Crazy Language Do you think English is easy to learn? Well, here's a short example of how complicated it in fact is! Check out this high quality print-friendly poster below - you're most welcome to print it out and place either in your classroom or Teacher's Room for everyone to see. Don't forget to 'LIKE' it or tweet about it (see the buttons above), or email it to your fellow teachers! Enjoyed this poster and learned something? Please share it! Want more teaching tips like this? Get the Entire BusyTeacher Library Instant download. Show me sample pages → Rate this article: was this poster helpful? 4 out of 5, rated by 142 teachers

100 Mostly Small But Expressive Interjections David Bier Thanks for this – what a fun post considering there’s no actual narrative in it! Cecily Some of these interjections are quite culturally and age specific, so if people need to be told what they mean, they should probably not be using them.For example, to many Brits, va-va-voom is not old-fashioned at all, but instead is firmly linked to the long-running ads that footballer Thierry Henry made for the Renault Clio. Himanshu Chanda Whoa ! What a biiiig list. And yes this ones really great. Listen and Write - Dictation Psychogeography evoL PsychogeogrAphix 2003 evoL PsychogeogrAphix 2004 evoL PsychogeogrAphix 2005 Psychogeography is an approach to geography that emphasizes playfulness and "drifting" around urban environments. It has links to the Situationist International. Development[edit] Psychogeography was originally developed by the avant-garde movement Lettrist International in the journal Potlach. In "Formulary for a New Urbanism", Chtcheglov had written "Architecture is the simplest means of articulating time and space, of modulating reality, of engendering dreams".[5] Similarly, the Situationists found contemporary architecture both physically and ideologically restrictive, combining with outside cultural influence, effectively creating an undertow, and forcing oneself into a certain system of interaction with their environment: "[C]ities have a psychogeographical relief, with constant currents, fixed points and vortexes which strongly discourage entry into or exit from certain zones". Dérive[edit] See also[edit]