681 Cliches to Avoid in Your Creative Writing 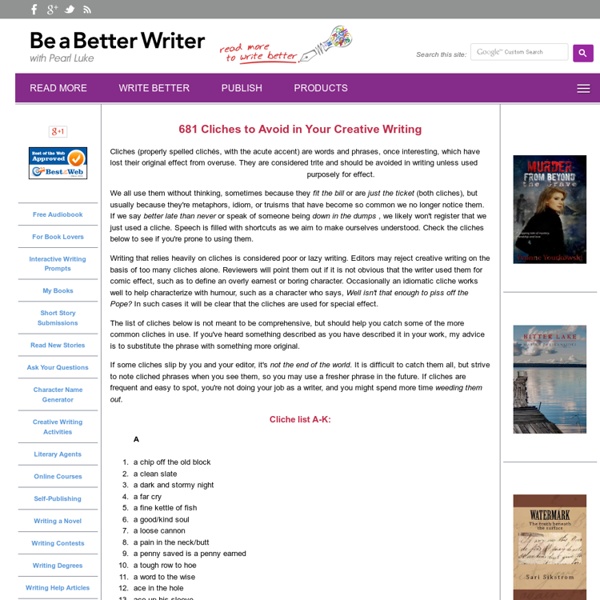 Cliches (properly spelled clichés, with the acute accent) are words and phrases, once interesting, which have lost their original effect from overuse. They are considered trite and should be avoided in writing unless used purposely for effect. We all use them without thinking, sometimes because they fit the bill or are just the ticket (both cliches), but usually because they're metaphors, idiom, or truisms that have become so common we no longer notice them. If we say better late than never or speak of someone being down in the dumps , we likely won't register that we just used a cliche. Speech is filled with shortcuts as we aim to make ourselves understood. Check the cliches below to see if you're prone to using them. Writing that relies heavily on cliches is considered poor or lazy writing. The list of cliches below is not meant to be comprehensive, but should help you catch some of the more common cliches in use. Cliche list A-K:

Oxford Dictionary of Word Origins "A treasure (from the Greek ‘thesauros’, treasure, store or storehouse) trove (past participle of an Anglo-Norman verb meaning ‘to find’) of verbal wonders" – William Hartston, Daily Express Combining both accessibility and authority, The Oxford Dictionary of Word Origins describes the origins and development of over 3,000 words and phrases in the English language. The book draws on Oxford's unrivalled dictionary research programme and language monitoring, and relates the fascinating stories behind many of our most curious terms and expressions in order to offer the reader a much more explicit account than can be found in a general English dictionary. Organized A-Z, the entries include first known use along with examples that illustrate the many faces of the particular word or phrase, from ‘handsome’ to ‘bachelor’ and ‘cute’ to ‘baby’, from ‘pagan’ to ‘palaver’ and ‘toff’ to ‘torpedo’. Bibliographic Information

9 Editing Tips that Make Your Writing Sparkle It’s often said that writing is rewriting. Banging out a quick first draft can be fun, but the real grunt work comes in revising your work. Here are nine editing tips that can help you polish your writing until it sparkles: 1. Read aloud When you become too familiar with a piece of writing, suddenly it’s more difficult to spot weaknesses and errors. 2. Better than just reading your work aloud is recording yourself (most computers have a voice recording program already installed). 3. Don’t write the last word of your first draft and then launch into editing mode straight away. 4. If your sentence makes sense without using a particular word, cut it. 5. “A passive construction occurs when you make the object of an action into the subject of a sentence,” says this university web resource. 6. Have you ever re-read a piece of your writing, only to find you’ve used the same word twice in the same sentence, or three times in the same paragraph? 7. 8. 9. Polished Writing

How to Avoid Plot Cliches: Tips for Writers on Increasing Their Chances of Publication | Suite101.com Nobody ever said plotting was easy. And because it's not easy, an alarming number of writers settle for so-called 'plot cliches'. Although the cliched situations that follow can appear in any story, some are more likely to be seen in a particular genre. For those who enjoy fantasy (or any writer who just likes a good laugh) Peter Anspach's "The Top 100 Things I'd Do if I Ever Became an Evil Overlord" shows the dumb mistakes that allow the villain to be killed or captured. What is a Plot Cliche? A cliche is an idea that has been overused to the point of losing its original effect or novelty, especially when at some stage it was considered to be 'different'. Four Examples of Plot Cliches The scene where the sleuth or main character hears from someone that they have some vital information to share... only to be thwarted because that person dies, leaves town or ends up in a coma before the information is passed on.The bitchy female who features as the hero's "other love interest".

Wordorigins.org Cliches #1 - A wedding takes place where the phrase "And if there's anyone present who can see why these two shouldn't be joined in marriage, speak now or forever hold your peace," is followed by a scene in which nobody holds their peace. (Corollary: It is a Universal Rule of Fantasy that the hero and his buddies, when attempting to stop a wedding between the hero's love interest and the villain, MUST choose the particular moment after that phrase is uttered, to launch their attack, --even if waiting to do so puts them at a strategic disadvantage.) #2. - The all-powerful wizard/seemingly unbeatable enemy turns out to be a mischievous child or a dinky old man behind a curtain. #3. - The villain's fortress starts to crumble around our heroes the moment he is defeated, leaving our heroes just barely enough time to escape before it collapses. #4. - The overly friendly (or, in some cases, vaguely menacing) bishop or church official turns out to actually be at the head of the evil cult. #15.

Cliches Characterization, or lack thereof 1. The heroine is stunningly beautiful. 2. 3. 4. 5. 6. 7. 8. 9. 10. 11. 12. Cliches of Relationships 13. 14. 15. 16. 17. 18. 19. Sex : to boldly go where everyone has come before 20. 21. 22. 23. 24. 25. 26. 27. 28. 29. 30. 31. Nine Months Later… 32. 33. 34. 35. 36. Any more that I've left out? 6 Writers Who Broke the Rules and Got Away with It Have you ever read a book and noticed the author has broken what we writers often hear of as “the rules”? My initial reaction is usually indignation: “Why can she get away with that, and I can’t??” The more I study the craft of writing, the more rules I hear about, and most of these are guidelines based on making a book reader-friendly. As much as I believe it’s good practice to avoid the common pitfalls of beginning writers, there are always exceptions to every rule. Here are six commonly heard rules for writers, and six authors who’ve gotten away with breaking them. Rule: Don’t write in First Person, Present Tense Audrey Niffenegger, The Time Traveler’s Wife: Niffenegger’s popular title is told by dual narrators from the first person point of view, in the present tense. Rule: Keep your novel under 100,000 words Hilary Mantel, Wolf Hall: Literary agents keep telling us it’s nearly impossible to sell an overly long book, these days. Rule: Limit the use of adverbs.

Why Fiction is So Hard to Write I’ve been blogging for a little over three years. I’ve been writing fiction since … well, pretty much since I could write. My blog posts are read by thousands of people. Only 1% of the fiction I’ve ever written has been published. Fiction is incredibly hard to do well. Lots of people can write decent non-fiction. I’m going to say this, despite being an advocate of great writing: Non-fiction doesn’t have to be especially well-written. Of course, it needs to be competent. Fiction is very, very different. Why do you read novels? I believe we read fiction to escape the world for a little while – to escape the limits of our own experience, our own perspective, our own consciousness. That’s why fiction writers have it so tough. When I’m writing a blog post, I don’t have too much to worry about. When I’m writing a single scene in a novel, I have a heck of a lot to do. And all those scenes need to tie together. With fiction, it’s impossible to get it right on the first pass through. Really hard. But…