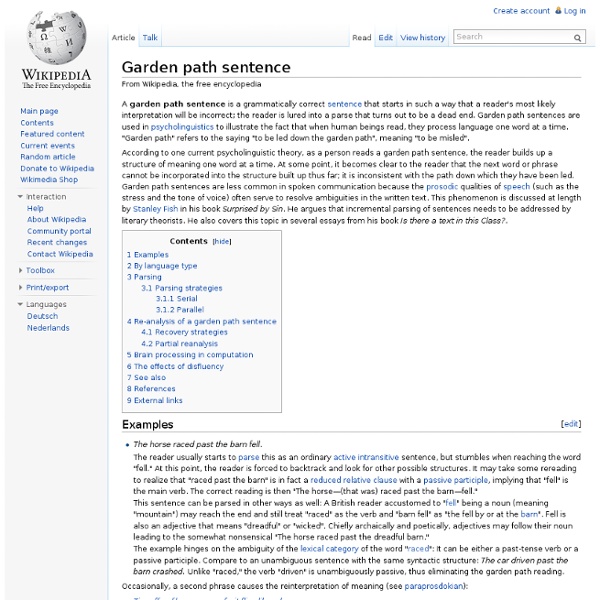 According to one current psycholinguistic theory, as a person reads a garden path sentence, the reader builds up a structure of meaning one word at a time. At some point, it becomes clear to the reader that the next word or phrase cannot be incorporated into the structure built up thus far; it is inconsistent with the path down which they have been led. Garden path sentences are less common in spoken communication because the prosodic qualities of speech (such as the stress and the tone of voice) often serve to resolve ambiguities in the written text. This phenomenon is discussed at length by Stanley Fish in his book Surprised by Sin. Examples[edit] Garden path sentences can be either simple or complex. Simple[edit] A second phrase can cause the reinterpretation of meaning (see paraprosdokian): Time flies like an arrow; fruit flies like a banana. Complex[edit] The horse raced past the barn fell. Other examples of garden path sentences are:[citation needed] By language type[edit] Parsing[edit] Related:  Language, Words, & Meaning

Isolating language A closely related concept is the analytic language, which in the extreme case does not use any inflections to indicate grammatical relationships (but which may still form compound words or may change the meanings of individual words with derivational morphemes, either of which processes gives more than one morpheme per word). Isolating languages are in contrast to synthetic languages, where words often consist of multiple morphemes.[1] That linguistic classification is subdivided into the classifications fusional, agglutinative, and polysynthetic, which are based on how the morphemes are combined. Explanation[edit] Although historically languages were divided into three basic types (isolating, flectional, agglutinative), these traditional morphological types can be categorized by two distinct parameters: A language can be said to be more isolating than another if its correspondence between word and number of morphemes approaches 1:1 more than the other one. See also[edit] References[edit]

New XO Attempting To Stamp Out Misuse of Word ‘Literally’ FORT BLISS, TEXAS – Major Sean O’Sullivan, the new executive officer of 1-42 Air Defense Artillery Battalion, has made it his primary mission in life to stamp out the misuse of the word “literally” among his staff officers and subordinate leaders within the battalion. O’Sullivan’s first salvo in this campaign came last Tuesday in the form of a signed and scanned memorandum sent to all 1-42 ADA staff officers and company commanders, with both the battalion and brigade commanders carbon copied. The memorandum went into some detail on how the XO saw an increase in the misuse of the word “literally” throughout the formation and encouraged all battalion personnel to avoid using it “in e-mails, military memos, or even off-duty hours if [they] do not know how to use it properly.” In the memo’s next paragraph, O’Sullivan writes: “I recently heard a battery commander during a safety brief say, ‘You guys need to stay safe. Like, literally, this is very important to me and the first sergeant.’

Word play Word play or wordplay[1] is a literary technique and a form of wit in which the words that are used become the main subject of the work, primarily for the purpose of intended effect or amusement. Examples of word play include puns, phonetic mix-ups such as spoonerisms, obscure words and meanings, clever rhetorical excursions, oddly formed sentences, double entendres, and telling character names (such as in the play The Importance of Being Earnest, Ernest being a given name that sounds exactly like the adjective earnest). Word play is quite common in oral cultures as a method of reinforcing meaning. Examples of visual orthographic and sound-based word play abound in both alphabetically and non-alphabetically written literature (e.g. Chinese). Techniques[edit] Some techniques often used in word play include interpreting idioms literally and creating contradictions and redundancies, as in Tom Swifties: "Hurry up and get to the back of the ship," Tom said sternly. Examples[edit] But 'Bun' would.

Soldiers Photography The Dutch photographer Claire Felicie photographed Dutch soldiers before, during and after their mission in Afghanistan. Claire wanted to know if war experiences leave traces on a young mans face and made this impressive photo series. How would you sound on Mars? NASA file Astronauts on Mars would probably speak with each other on the surface through radio links — but if they were to pick up voices or sounds transmitted through Martian air, would they sound different? Acoustics experts say they would. By Alan Boyle, Science Editor, NBC News If you could speak on Venus, you might sound like a deep-voiced Smurf — while on Mars, your voice could have the shallow ring of a higher-pitched Shrek. "This is the real deal," Tim Leighton, an acoustics professor at the British university, said in a news release. The sounds are being shown off over the next week at the Astrium Planetarium at INTECH, near Winchester, as part of a show titled "Flight Through the Universe." "Hearing the sounds communicates ideas about the different atmospheres and highlights the sheer alienness of the other worlds in our solar system," planetarium manager Jenny Shipway said. "On Venus, the pitch of your voice would become much deeper," Leighton said.

Comedic device List of comedic devices[edit] Repetition[edit] Hyperbole, or Overstatement[edit] Hyperbole, an overstatement, is a figure of speech in which statements are exaggerated or extravagant. Understatement[edit] An understatement is a figure of speech in which statements are purposely understated. Double entendre[edit] A double entendre is a spoken phrase that can be understood in either of two ways. Pun[edit] A pun consists of a deliberate confusion of similar words or phrases for humorous effect, whether humorous or serious. Juxtaposition[edit] Juxtaposition is a literary technique which causes the audience to compare two elements simply because they are placed next to each other. Mistaken identity[edit] Taboo[edit] There is a liberating element to saying something that nobody else would say in a civilised environment. Slapstick[edit] Slapstick is a type of comedy involving exaggerated physical violence. See also[edit] External links[edit]

Animal Behaviorist: We'll Soon Have Devices That Let Us Talk With Our Pets - Megan Garber We're fast approaching the point, says Con Slobodchikoff, when computers will help to mediate our communications with animals. We all try to talk with animals, but very few of us do so professionally. And even fewer are trying to build devices that could allow us to communicate with our pets and farm animals. Meet one person who is trying to do just that: Con Slobodchikoff , a professor emeritus at Northern Arizona University, and a modern-day Dr. To arrive at those findings, Slobodchikoff relied on statistical analyses of the alarm calls produced by one particular species, the Gunnison's prairie dog . For a detailed (and totally delightful) guide to the prairie dogs' different alarm calls, see this Radiolab interactive . To learn more, I spoke with Slobodchikoff about his previous research, his upcoming investigations, and what he thinks the future will hold when it comes to animal-human communications. My conversation with him, lightly edited, is below. And the jump-yip !

Barry Humphries John Barry Humphries, AO, CBE (born 17 February 1934) is an Australian comedian, satirist, artist, and author. Humphries is best known for writing and playing his on-stage and television alter egos Dame Edna Everage and Sir Les Patterson. He is also a film producer and script writer, a star of London's West End musical theatre, an award-winning writer and an accomplished landscape painter. Humphries' characters have brought him international renown, and he has appeared in numerous films, stage productions and television shows. Early childhood[edit] Disguising myself as different characters and I had a whole box of dressing up clothes ... His parents nicknamed him "Sunny Sam", and his early childhood was happy and uneventful, but in his teens Humphries began to rebel against the strictures of conventional suburban life by becoming "artistic" – much to the dismay of his parents who, despite their affluence, distrusted "art". Education[edit] Early career in Australia[edit] 1970s[edit]

13 Little-Known Punctuation Marks We Should Be Using Because sometimes periods, commas, colons, semi-colons, dashes, hyphens, apostrophes, question marks, exclamation points, quotation marks, brackets, parentheses, braces, and ellipses won't do. 1. Interrobang You probably already know the interrobang, thanks to its excellent moniker and increasing popularity. Though the combination exclamation point and question mark can be replaced by using one of each (You did what!? or You don't read mental_floss?!) 2. The backward question mark was proposed by Henry Denham in 1580 as an end to a rhetorical question, and was used until the early 1600s. 3. It looks a lot like the percontation point, but the irony mark's location is a bit different, as it is smaller, elevated, and precedes a statement to indicate its intent before it is read. 4. Among Bazin's proposed new punctuation was the love point, made of two question marks, one mirrored, that share a point. 5. 6. Need to say something with unwavering conviction? 7. 8. 9. 10. 11. 12 & 13.