20 Common Grammar Mistakes That (Almost) Everyone Gets Wrong 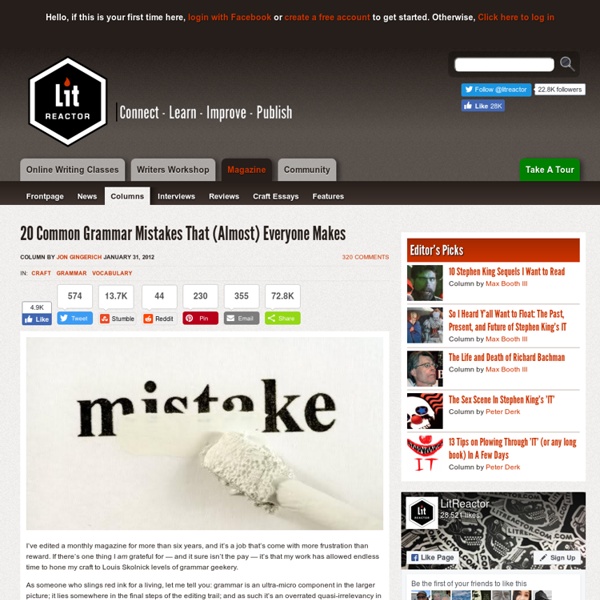 I’ve edited a monthly magazine for more than six years, and it’s a job that’s come with more frustration than reward. If there’s one thing I am grateful for — and it sure isn’t the pay — it’s that my work has allowed endless time to hone my craft to Louis Skolnick levels of grammar geekery. As someone who slings red ink for a living, let me tell you: grammar is an ultra-micro component in the larger picture; it lies somewhere in the final steps of the editing trail; and as such it’s an overrated quasi-irrelevancy in the creative process, perpetuated into importance primarily by bitter nerds who accumulate tweed jackets and crippling inferiority complexes. But experience has also taught me that readers, for better or worse, will approach your work with a jaundiced eye and an itch to judge. While your grammar shouldn’t be a reflection of your creative powers or writing abilities, let’s face it — it usually is. Who and Whom This one opens a big can of worms. Which and That Lay and Lie Moot Nor

List of English-language idioms This is a list of notable idioms in the English language. An idiom is a common word or phrase with a culturally understood meaning that differs from what its composite words' denotations would suggest. For example, an English speaker would understand the phrase "kick the bucket" to mean "to die" – and also to actually kick a bucket.

Spice Up Your Writing With Dialogue by Judy Cullins Does your chapter sound like a report? Does it go on and on with past tense sentences that tell, rather than show? To spice up your self help, non-fiction or fiction book and even promotional writing, you need to use much more dialogue. Why? CALLIHOO Writing Helps Character Feelings You can describe your character's feelings in more exact terms than just "happy" or "sad." Check these lists for the exact nuance to describe your character's intensity of feelings. SF Characters | SF Items | SF Descriptors | SF Places | SF EventsSF Jobs/Occupations | Random Emotions | Emotions List | Intensity of Feelings How to Build a Universe That Doesnt Fall Apart Two Days Later First, before I begin to bore you with the usual sort of things science fiction writers say in speeches, let me bring you official greetings from Disneyland. I consider myself a spokesperson for Disneyland because I live just a few miles from it — and, as if that were not enough, I once had the honour of being interviewed there by Paris TV. For several weeks after the interview, I was really ill and confined to bed. I think it was the whirling teacups that did it. Elizabeth Antebi, who was the producer of the film, wanted to have me whirling around in one of the giant teacups while discussing the rise of fascism with Norman Spinrad... an old friend of mine who writes excellent science fiction.

Zeitgeist The Zeitgeist (spirit of the age or spirit of the time) is the intellectual fashion or dominant school of thought that typifies and influences the culture of a particular period in time. For example, the Zeitgeist of modernism typified and influenced architecture, art, and fashion during much of the 20th century.[1] The German word Zeitgeist is often attributed to the philosopher Georg Hegel, but he never actually used the word. Unusual Words Unusual Words A by no means exhaustive list of rare, obscure, strange and sometimes funny words and their meanings that only seem to crop up in crosswords and dictionaries. Words that are used so seldom, you wonder who invented them and why. Home ~ The Stories ~ Diversions ~ Links ~ Contact

6 Ways to Hook Your Readers from the Very First Line Although I consider myself an avid reader, I must admit I have a short attention span when it comes to getting into books. If you fail to grab my attention in the first few lines, I start spacing out. Most readers are like me. Most people don’t want to spend the first 50 pages trying to get into a book. Here are a few things I find annoying in the first lines of a story:

Plan Ninety Days of Blogging in Ninety Minutes (Or Less) If you’re having trouble keeping your blog on track, a calendar may be just what the blogger ordered. We always have ‘em for The Daily Post and Hot off the Press — they help us organize and space out the topics we want to cover, and they let us relax knowing that come April 5th, 15th, and 25th, post ideas will be at the ready. We may re-organize as we go or toss in new posts based on how the blogular winds are blowing, but we can trust in the basic structure. BACK TO THE FUTURE : Irina Werning - Photographer I love old photos. I admit being a nosey photographer. As soon as I step into someone else’s house, I start sniffing for them. Most of us are fascinated by their retro look but to me, it’s imagining how people would feel and look like if they were to reenact them today… Two years ago, I decided to actually do this.

Weasel word A weasel word (also, anonymous authority) is an informal term[1] for equivocating words and phrases aimed at creating an impression that something specific and meaningful has been said, when in fact only a vague or ambiguous claim has been communicated. For example, an advertisement may use a weasel phrase such as "up to 50% off on all products". This is misleading because the audience is invited to imagine many items reduced by the proclaimed 50%, but the words taken literally mean only that no discount will exceed 50%, and in extreme misrepresentation, the advertiser need not reduce any prices, which would still be consistent with the wording of the advertisement, since "up to 50" most literally means "any number less than or equal to 50". Origin[edit] Forms[edit]