The 100 Most Beautiful Words in English 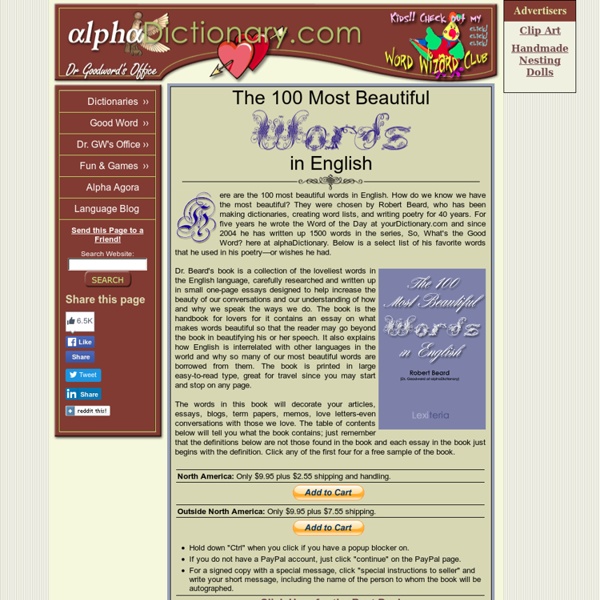 ere are the 100 most beautiful words in English. How do we know we have the most beautiful? They were chosen by Robert Beard, who has been making dictionaries, creating word lists, and writing poetry for 40 years. For five years he wrote the Word of the Day at yourDictionary.com and since 2004 he has written up 1500 words in the series, So, What's the Good Word? here at alphaDictionary. Dr. The words in this book will decorate your articles, essays, blogs, term papers, memos, love letters-even conversations with those we love.

Arctolatry Mamihlapinatapai The word Mamihlapinatapai (sometimes spelled mamihlapinatapei) is derived from the Yaghan language of Tierra del Fuego, listed in The Guinness Book of World Records as the "most succinct word", and is considered[by whom?] one of the hardest words to translate. It allegedly refers to "a look shared by two people, each wishing that the other will offer something that they both desire but are unwilling to suggest or offer themselves It is also referenced in Defining the World in a discussion of the difficulties facing Samuel Johnson in trying to arrive at succinct, yet accurate, definitions of words.[5] In popular culture[edit] The word and its definition was the title of a groundbreaking exhibition by Max Pinckers and Michiel Burger in Amsterdam's Flemish Cultural Centre De Brakke Grond in 2012. References[edit] Jump up ^ Peter Matthews, Norris McWhirter.

Brain Pickings Grandiloquent Dictionary This is the result of an ongoing project to collect and distribute the most obscure and rare words in the English language. It also contains a few words which do not have equivalent words in English. At present, the dictionary contains approximately 2700 words, though it is constantly growing. Following a large number of requests, pronounciations are now being (slowly) added to the listing, although it will be a long time before they are all added. After almost three years of work, the new Third Edition of the Grandiloquent Dictionary is now available as a PDF File. Including ~500 Words Not in the Online Version! In honour of ten years of the Grandiloquent Dictionary being available online, a special edition print version has been published! The Author's Webpage You are visitor since this counter was added. Donate0 Donate0 Experimental Search The authors intend to eventually add a search box for searching this dictionary, but for the present we rely on a more general google search.

Saudade Saudade (European Portuguese: [sɐwˈðaðɨ], Brazilian Portuguese: [sawˈdadi] or [sawˈdadʒi], Galician: [sawˈðaðe]; plural saudades)[1] is a Portuguese and Galician word that has no direct translation in English. It describes a deep emotional state of nostalgic or profound melancholic longing for an absent something or someone that one loves. Moreover, it often carries a repressed knowledge that the object of longing may never return.[2] A stronger form of saudade may be felt towards people and things whose whereabouts are unknown, such as a lost lover, or a family member who has gone missing. Saudade was once described as "the love that remains" after someone is gone. In Portuguese, "Tenho saudades tuas" (European Portuguese) or "Tenho saudades de você" (Brazilian Portuguese), translates as "I have saudade of you" meaning "I miss you", but carries a much stronger tone. In Brazil, the day of Saudade is officially celebrated on 30 January.[3][4] History[edit] Origins[edit] Definition[edit]

7 Essential Books on Optimism by Maria Popova What the love of honey has to do with ancient wisdom, our capacity for hope, and the future of technology. Every once in a while, we all get burned out. Sometimes, charred. And while a healthy dose of cynicism and skepticism may help us get by, it’s in those times that we need nothing more than to embrace life’s promise of positivity with open arms. Antoine de Saint-Exupéry’s The Little Prince, one of our must-read children’s books with philosophy for grown-ups, is among the most poetic and hopeful reflections on human existence ever penned. Here is my secret. Published in 1943, translated into 180 languages since and adapted to just about every medium, Exupéry’s famous novella is one of the best-selling books of all time. As you read this book, you will see that there is an epidemic of depression among young adults and among children in the United States today. Reviewed in full, with more images, here. Full review here. 'Live Humbly' by Mikey Burton Craving more?

Word of the Day! The Dead Lily, the caretaker's daughter, was literally run off her feet. Hardly had she brought one gentleman into the little pantry behind the office on the ground floor and helped him off with his overcoat than the wheezy hall-door bell clanged again and she had to scamper along the bare hallway to let in another guest. It was well for her she had not to attend to the ladies also. But Miss Kate and Miss Julia had thought of that and had converted the bathroom upstairs into a ladies' dressing-room. Miss Kate and Miss Julia were there, gossiping and laughing and fussing, walking after each other to the head of the stairs, peering down over the banisters and calling down to Lily to ask her who had come. It was always a great affair, the Misses Morkan's annual dance. Of course they had good reason to be fussy on such a night. —O, Mr Conroy, said Lily to Gabriel when she opened the door for him, Miss Kate and Miss Julia thought you were never coming. —Miss Kate, here's Mrs Conroy. —O no, sir!

Unusual Words Rendered in Bold Graphics by Maria Popova A visual A-Z of the hidden treasures of language. As a lover of language and words, especially obscure and endangered words, I was instantly besotted with Project Twins’ visual interpretations of unusual words, originally exhibited at the MadArt Gallery Dublin during DesignWeek 2011. Acersecomic A person whose hair has never been cut. Biblioclasm The practice of destroying, often ceremoniously, books or other written material and media. Cacodemonomania The pathological belief that one is inhabited by an evil spirit. Dactylion An anatomical landmark located at the tip of the middle finger. Enantiodromia The changing of something into its opposite. Fanfaronade Swaggering; empty boasting; blustering manner or behavior; ostentatious display. Gorgonize To have a paralyzing or mesmerizing effect on: Stupefy or petrify Hamartia The character flaw or error of a tragic hero that leads to his downfall. Infandous Unspeakable or too odious to be expressed or mentioned. Jettatura Ktenology Leptosome Welter

From Bell Labs to Best Buy Image: Takeshi Murata, Homestead Grays, 2008, (Still). "PREDRIVE: After Technology" (currently on exhibition at The Mattress Factory, Pittsburgh, PA November 14-April 2, 2009) features new works by six international artists including Takeshi Murata, Paper Rad, Gretchen Skogerson, Antoine Catala, and Brody Condon. The exhibition was conceived with a very specific group of artists in mind -- artists who placed both the dysfunction and arrogance of ever-changing technologies at the center of their work. In a sense, these artists are working in the shadow of a technological dystopia (and euphoria) that had begun as early as the Industrial Revolution -- as expressed in the vacant, vectored glances mapped out in Edouard Manet's The Balcony (1868-69) or the absolute pleasure of stop-motion animation in Georges Melies' An Up-To-Date Conjuror (1899). Melissa Ragona: Last night I was asking about how you each manipulate your work at the level of the pixel. TM: Well, like Monster Movie. TM: Yeah