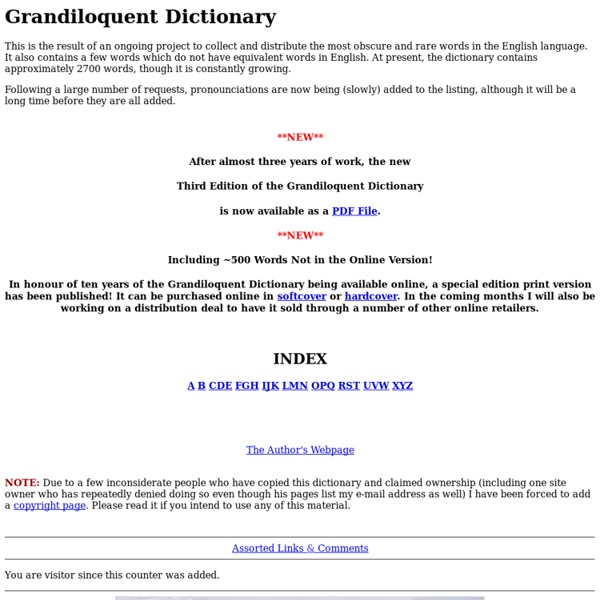 This is the result of an ongoing project to collect and distribute the most obscure and rare words in the English language. It also contains a few words which do not have equivalent words in English. At present, the dictionary contains approximately 2700 words, though it is constantly growing. Following a large number of requests, pronounciations are now being (slowly) added to the listing, although it will be a long time before they are all added. After almost three years of work, the new Third Edition of the Grandiloquent Dictionary is now available as a PDF File. Including ~500 Words Not in the Online Version! In honour of ten years of the Grandiloquent Dictionary being available online, a special edition print version has been published! The Author's Webpage You are visitor since this counter was added. Donate0 Donate0 Experimental Search The authors intend to eventually add a search box for searching this dictionary, but for the present we rely on a more general google search.

Shakespeare Insult Kit Shakespeare Insult Kit Since 1996, the origin of this kit was listed as anonymous. It came to me on a piece of paper in the 90's with no attribution, and I thought it would make a cool web page. Though I searched for the origin, I could never find it. The 100 Most Beautiful Words in English ere are the 100 most beautiful words in English. How do we know we have the most beautiful? They were chosen by Robert Beard, who has been making dictionaries, creating word lists, and writing poetry for 40 years. For five years he wrote the Word of the Day at yourDictionary.com and since 2004 he has written up 1500 words in the series, So, What's the Good Word? here at alphaDictionary. Below is a select list of his favorite words that he used in his poetry—or wishes he had.

Obscure Words Unanswered Questions New Answers Q&A Categories Coupons 19 Outstanding Words You Should Be Working Into Conversation There are some of our favorite words that appeared in mental_floss stories in 2011. Some are foreign words. Others come from medical dictionaries. And there's a surprising amount of hobo slang.

otherwordly pronunciation | nats-ka-‘shE (nahtzkah-SHEE)Japanese | 懐かしいtip | The final pronunciation doesn’t really have an “oo” sound in it. pronunciation | swon-‘nyA Anonymous asked: What is Zealous? Unusual Words Rendered in Bold Graphics by Maria Popova A visual A-Z of the hidden treasures of language. As a lover of language and words, especially obscure and endangered words, I was instantly besotted with Project Twins’ visual interpretations of unusual words, originally exhibited at the MadArt Gallery Dublin during DesignWeek 2011.

Word of the Day! Urban Dictionary

"This is the result of an ongoing project to collect and distribute the most obscure and rare words in the English language. It also contains a few words which do not have equivalent words in English. At present, the dictionary contains approximately 2700 words, though it is constantly growing." by macopa May 14

As a word collector of sorts, I find this site exquisite. Definitely worth checking out if you are interested in rare or obscure words. by infiniti Nov 3