A Word A Day 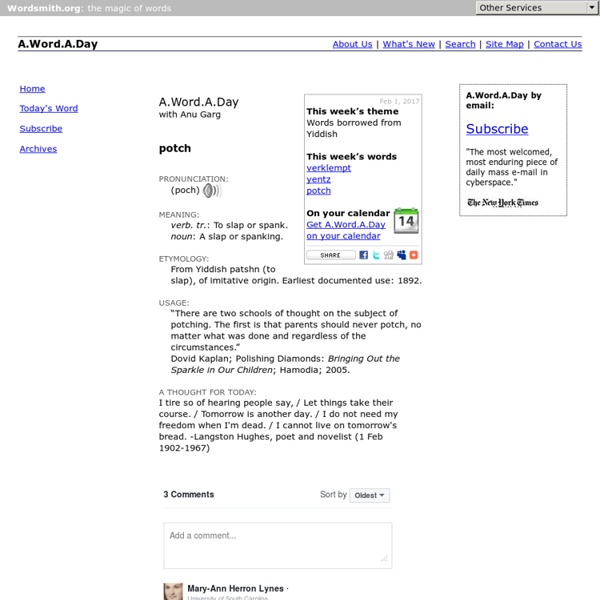 History of the OED The Oxford English Dictionary has been the last word on words for over a century. But, as with a respected professor or admired parent, we count on its wisdom and authority without thinking much about how it was acquired. What is the history of the Oxford English Dictionary? Exploring its origins and development will give new insight into this extraordinary, living document. How it began When the members of the Philological Society of London decided, in 1857, that existing English language dictionaries were incomplete and deficient, and called for a complete re-examination of the language from Anglo-Saxon times onward, they knew they were embarking on an ambitious project. The project proceeded slowly after the Society’s first grand statement of purpose. More work than they thought Existing English dictionaries were incomplete and deficient It was estimated that the project would be finished in approximately ten years. The English language never stops evolving One step at a time

HyperGrammar Welcome to HyperGrammar electronic grammar course at the University of Ottawa's Writing Centre. This course covers approximately the same ground as our English department's ENG 1320 Grammar course. The content of HyperGrammar is the result of the collaborative work of the four instructors who were teaching the course in Fall 1993: Heather MacFadyen, David Megginson, Frances Peck, and Dorothy Turner. This package is designed to allow users a great deal of freedom and creativity as they read about grammar. This package is currently under construction! Please read the Copyright and Terms of Use before you begin using HyperGrammar, and note that we provide NO WARRANTY of the accuracy or fitness for use of the information in this package. * This site uses the Oxford dictionary spelling. We do not offer any writing help by e-mail. No permission is required to link to this site. Written by David Megginson (editor)

KPIG.COM - Freedom, California Resources : Deciphering Medspeak To make informed health decisions, you have probably read a newspaper or magazine article, tuned into a radio or television program, or searched the Internet to find answers to health questions. If so, you have probably encountered "medspeak," the specialized language of health professionals. The Medical Library Association developed "Deciphering Medspeak" to help translate common "medspeak" terms: Medspeak TermsRx Riddles Solved! The brochure also features MLA's "Top Ten" Most Useful Websites. This brochure is also available in Spanish and Plain Language (low literacy) versions Also available are disease-specific versions of the popular "Deciphering Medspeak" brochure. Each brochure features a list of Rx riddles or abbreviations as well as a glossary of medspeak terms and MLA-recommended Websites related to each disease. Diabetes, HIV-AIDS and Stroke Medspeaks are now also available in Plain Language (low literacy) versions!

dragoman A.Word.A.Day with Anu Garg dragoman (DRAG-uh-man) noun: An interpreter or guide. The word took a scenic route to its present form via French, Italian, Latin/Greek, Arabic, and Aramaic, from Akkadian targumanu (interpreter). "Soon, Art Buchwald set himself up as the laughing dragoman to American celebrities. "Born in Jerusalem, Wadie Said went from being a dragoman to a salesman in the United States and thence to a hugely successful businessman in Egypt." Teaching a child not to step on a caterpillar is as valuable to the child as it is to the caterpillar.

Online Etymology Dictionary bias (n.) 1520s, from French biais "slant, slope, oblique," also figuratively, "expedient, means" (13c., originally in Old French a past participle adjective, "sideways, askance, against the grain"), of unknown origin, probably from Old Provençal biais, with cognates in Old Catalan and Sardinian; possibly from Vulgar Latin *(e)bigassius, from Greek epikarsios "athwart, crosswise, at an angle," from epi- "upon" + karsios "oblique," from PIE *krs-yo-, from root *(s)ker- (1) "to cut" (see shear (v.)). It became a noun in Old French. "[A] technical term in the game of bowls, whence come all the later uses of the word" [OED]. For what a man had rather were true he more readily believes. bias (v.) 1620s, literal and figurative, from bias (n.).

40+ Tips to Improve your Grammar and Punctuation After all these years you finally have the courage and opportunity to write the email announcing that you and you alone have single handedly saved the company from utter disaster. You’re excited, you type it, you spell check it, and you hit send.Everything is great except that your gold star memo has dangling modifiers, double negatives and run-on sentences colliding with each other. Now I am no grammar whiz but I know a good resource when I see it. Purdue University maintains an purdue.edu/" target="_blank">online writing lab and I spent some time digging through it. Learn and enjoy! • A or An? • Adjective or Adverb? • Adjectives with Countable and Uncountable Nouns • Using Articles ( A/An/The ): with 2 exercises and answer keys Nouns • A Little Help with Capitals • Count and NonCount Nouns (with Plurals, Articles, and Quantity Words): with 2 exercises and answer keys • Count and NonCount Nouns (with Articles and Adjectives): with exercise and answer key Prepositions Pronouns • Pronoun Case Commas

History Commons redolent A.Word.A.Day with Anu Garg A picture is worth a thousand words, they say, and if that's true this week we're going to send you a thousand words a day. "I've always been fascinated by the conversation between words and images. "As a longtime fan of A.Word.A.Day, I was very excited when Anu Garg asked me to do a series of curiotypes for this week's words. "If you'd like to see more of my work, including earlier stages of these images and the scientific alphabet mentioned above, please visit my blog, Oddments & Curiosities." redolent (RED-uhl-uhnt) adjective: 1. From Old French redolent (smelling), from Latin redolens, present participle of redolere (to give off a smell), from re- (intensive prefix) + olere (to smell). "There's a heavy dose of irony in the title of Wendy Cope's new book of poems, Family Values. "Once again, living rooms are redolent with the pungent scent of sandalwood." See more usage examples of redolent in Vocabulary.com's dictionary.