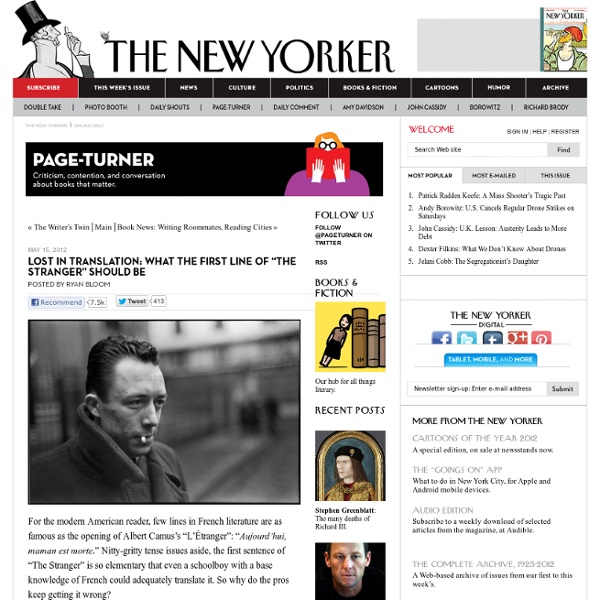 For the modern American reader, few lines in French literature are as famous as the opening of Albert Camus’s “L’Étranger”: “Aujourd’hui, maman est morte.” Nitty-gritty tense issues aside, the first sentence of “The Stranger” is so elementary that even a schoolboy with a base knowledge of French could adequately translate it. So why do the pros keep getting it wrong? Within the novel’s first sentence, two subtle and seemingly minor translation decisions have the power to change the way we read everything that follows. What makes these particular choices prickly is that they poke at a long-standing debate among the literary community: whether it is necessary for a translator to have some sort of special affinity with a work’s author in order to produce the best possible text. Arthur Goldhammer, translator of a volume of Camus’s Combat editorials, calls it “nonsense” to believe that “good translation requires some sort of mystical sympathy between author and translator.”

Pronunciation of ‘s’ sounds impacts perception of gender, CU-Boulder researcher finds A person’s style of speech — not just the pitch of his or her voice — may help determine whether the listener perceives the speaker to be male or female, according to a University of Colorado Boulder researcher who studied transgender people transitioning from female to male. The way people pronounce their “s” sounds and the amount of resonance they use when speaking contributes to the perception of gender, according to Lal Zimman, whose findings are based on research he completed while earning his doctoral degree from CU-Boulder’s linguistics department. Zimman, who graduated in August, is presenting his research Jan. 5 at the annual meeting of the Linguistic Society of America in Boston. “In the past, gender differences in the voice have been understood, primarily, as a biological difference,” Zimman said. Vocal resonance also affected the perception of gender in Zimman’s study.

The 10 Most Disturbing Books Of All Time In my younger days if I heard a book or movie was disturbing or hard to handle I generally took that as a challenge. Most books generally turned out to not be too bad, but occasionally I’d come across something that would leave me with a sick feeling in my stomach for weeks. I’ve largely outgrown this “genre” of late, but here are my picks for the ten most disturbing books of all time. Any one of these books is capable of leaving you feeling a little depressed at the least, and permanently scarred at the worst. I’d say enjoy, but that doesn’t really seem appropriate … 10. Blindness is a book with a truly horrifying scenario at it’s heart: what if everyone in the world were to lose their sight to disease in a short period of time? 9. Anti drug crusaders should stop airing goofy commercials that nobody takes seriously and start pushing to have Requiem For A Dream made required reading for every high schooler in the country. 8. Naked Lunc is another ode to drug addiction. 7. 6. Bleak. 5.

The Syro-Aramaic Reading of the Koran The Syro-Aramaic Reading of the Koran: A Contribution to the Decoding of the Language of the Koran English Edition of 2007 (Die syro-aramäische Lesart des Koran: Ein Beitrag zur Entschlüsselung der Koransprache (2000)) is a book by Christoph Luxenberg. This book is considered a controversial work, triggering a debate about the history, linguistic origins and correct interpretation of the Qur'an. It has received much coverage in the mainstream media.[1] The book argues that the Qur'an at its inception was drawn from Christian Syro-Aramaic texts, in order to evangelize the Arabs in the early 8th century.[2] Summary[edit] Richard Kroes summarises the argument of the book as follows: According to Luxenberg, the Qur'an was not written in classical Arabic but in a mixed Arabic-Syriac language, the traders' language of Mecca and it was based on Christian liturgical texts. Thesis[edit] Luxenberg remarks that the Qur'an contains much ambiguous and even inexplicable language. A review by Prof. Dr.

Thirty Times ‘More Fair than Black’: Othello Re-Translation as Political Re-Statement Camus - The Stranger (aka Outsider) - discussion | Literary Centennials Meursault, the anti-hero of Camus masterpiece L’etranger continually puts the reader on the back foot: as he appears as an intensely self-interested man, but also an innocent abroad, he can be an extremely sensual man, but also a callous individual, he seems to be both a rebel and a man desperately trying to conform, above all he is an absurd man and we witness his growing self-awareness of the world around him that he struggles to come to terms with. The novel takes the form of a bildungsroman, as we witness his growth through adversity following the choices he makes in a life, which he comes to believe is absurd.. I read this back in the 1970’s and found I could identify with Meursault the sensual self-interested young man of part 1 of the novel, however I could not get to grips with his seeming acquiescence to his fate in part 2, putting it down to the establishments vindictiveness towards a young man, who appeared to rebel against society.

Hunter S. Thompson Essay. “Open Letter To The Youth Of Our Nation” 1955 | Hunter S. Thompson Books Hunter wrote this essay in 1955 for The Athenaeum Literary Association’s bound yearbook, it won third prize in The Nettleroth contest. Great writing for a 18 year old, and makes for a funny read too. Young people of America, awake from your slumber of indolence and hark-en the call of the future! I say there is no excuse for a feeling of insecurity on your part;there is no excuse for juvenile delinquency; there is no excuse for your attitude except that you are rotten and lazy! I warn you, if you don’t start now it will be too late, and the blame for the end of the world will be laid at your feet. Fearfully and disgustedly yours, John J. Like this: Like Loading...