The Seven Needs of Real-Time Curators 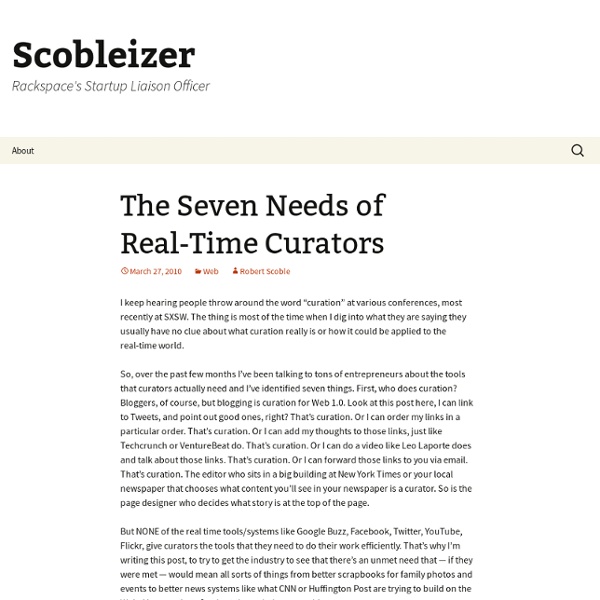 I keep hearing people throw around the word “curation” at various conferences, most recently at SXSW. The thing is most of the time when I dig into what they are saying they usually have no clue about what curation really is or how it could be applied to the real-time world. So, over the past few months I’ve been talking to tons of entrepreneurs about the tools that curators actually need and I’ve identified seven things. First, who does curation? Bloggers, of course, but blogging is curation for Web 1.0. Look at this post here, I can link to Tweets, and point out good ones, right? But NONE of the real time tools/systems like Google Buzz, Facebook, Twitter, YouTube, Flickr, give curators the tools that they need to do their work efficiently. As you read these things they were ordered (curated) in this order for a reason. This is a guide for how we can build “info molecules” that have a lot more value than the atomic world we live in now. A curator is an information chemist. 1. 2. 3. 4.

The Curation Buzz... And PearlTrees Posted by Tom Foremski - April 12, 2010 My buddy Dave Galbraith is the first person I remember to first start talking about curation and the Internet, several years ago. He even named his company Curations, and created a tool/site for curation: Wists. And his site SmashingTelly - is great example of curation, a hand-picked collection of great videos. Today, much is written about curation and the Internet but it all seems mostly talk because we don't really have the tools we need. Curation seems to be just a new way to describe things like blogging and "Editor's Picks." Content Strategy: Exploring Content Curation Tools Content curation has been getting a lot of attention recently. We’ve covered what it is, why it’s valuable and offered best practices on how to curate content on your own. Yet, if management systems can be designed to manage content, why not build one to curate content?

Let’s Call It What It Is: Pervasive Communication I don’t want to talk about social media. I don’t want to talk about social business. I don’t want to talk about social enterprise. Curation is More Than Integration The term “Curation” doesn’t yet score a hit in the archive of Scott Adam’s Dilbert cartoons, which means it’s still living the short half-life between entering the pop management lexicon and becoming the object of ridicule. Trust me. There are enough people running around the marketing world babbling about “curating,” that it won’t be long before Dogbert or the Pointy-Haired Boss skewer us all for using language that no real human being would ever utter. We hear a term like “curate” crop up in a few business conversations. Opinions Libres - Le blog d'Olivier Ezratty The Traveling Geeks met with Patrice Lamothe from Pearltrees (@pearltrees) for nearly two hours at the beginning of the Traveling Geeks tour. This guy is running the Internet startup buzz playboo k like perfect, at least for a French startup: he did a tour in the Silicon Valley visiting local influencers and bloggers, sponsored the Traveling Geeks and Leweb, talking at Leweb in plenary session (twice…), creating plug-ins, buttons, that can be placed everywhere on social sites, his site is in English, and so on. As a result, he got heck of a good visibility. And we were very kindly welcomed in the company which looks like an US startup: lots of coffee and… US sized patisserie. The company raised $3m of funding (2m€) out of business angels and family offices.

Twitter, Facebook, and social activism At four-thirty in the afternoon on Monday, February 1, 1960, four college students sat down at the lunch counter at the Woolworth’s in downtown Greensboro, North Carolina. They were freshmen at North Carolina A. & T., a black college a mile or so away. “I’d like a cup of coffee, please,” one of the four, Ezell Blair, said to the waitress. The 99 Percent The author of The 4-Hour Chef on how he markets his work while keeping focused with the help of timers, old laptops, and an avoidance of public speaking. read more → Build a community of fans and customers before you release your work to dramatically increase your chances of success and be lightyears ahead of your peers. Increase Your Team's Motivation Five-Fold - Scott Keller by Scott Keller | 11:09 AM April 26, 2012 In a famous experiment, researchers ran a lottery with a twist. Half the participants were randomly assigned a lottery number. The remaining half were given a blank piece of paper and a pen and asked to write down any number they would like as their lottery number. Just before drawing the winning number, the researchers offered to buy back the tickets.

VitalSmarts - Books The truth is, we all need to be better influencers. Hardly a day passes that we don’t try to influence others to do something different. We do our best to motivate employees to demonstrate more concern for profitability. We struggle to enable our teams to complete projects on time and on budget. In summary, we continually work on ways to exert our influence, but we regularly fall short.

Pearltrees Visualizes How You Organize the Web This post is part of Mashable's Spark of Genius series, which highlights a unique feature of startups. If you would like to have your startup considered for inclusion, please see the details here. The series is made possible by Microsoft BizSpark. Name: Pearltrees Quick Pitch: Pearltrees is a new visual way to organize content on the Web and connecting people's interests.

The 7 most iconic film-stills in movie history Back in the day, these photos had an important role of summing up the films narrative and key characters and enticing people into seeing the film. With the arrival of the digital age, HD screen grabs and a plethora of social media, the film-still doesn’t quite have the same importance today. But it still has an influence and many artist-photographers have used the aesthetic of the genre as the cornerstone of their work. With so many fabulous films produced, there’s literally millions of photos to choose from.

Developing a Collaborative Approach to Improving Project Management Practices, Part 1 - Managing Technology By Dennis D. McDonald For a .pdf version of this article click or tap the above image.In Agile grows up and new challenges emerge author Rick Freedman points out what project managers, sooner or later, learn from the School of Hard Knocks: changing and improving project management practices to improve the likelihood of project success involves not just improved management methods but also cultural changes within the sponsoring organization. Doing project work more/better/faster doesn’t help if the organization still imposes traditional top-down management approaches that involve tossing requirements and reporting practices “over the wall” to the project team in a low-engagement fashion. In his article Freedman interprets the discussions he heard at a recent Agile conference as evidence that the Agile approach to project management is graduating from a tactical to a strategic perspective. I have found that what he says about Agile is also true of project management in general: