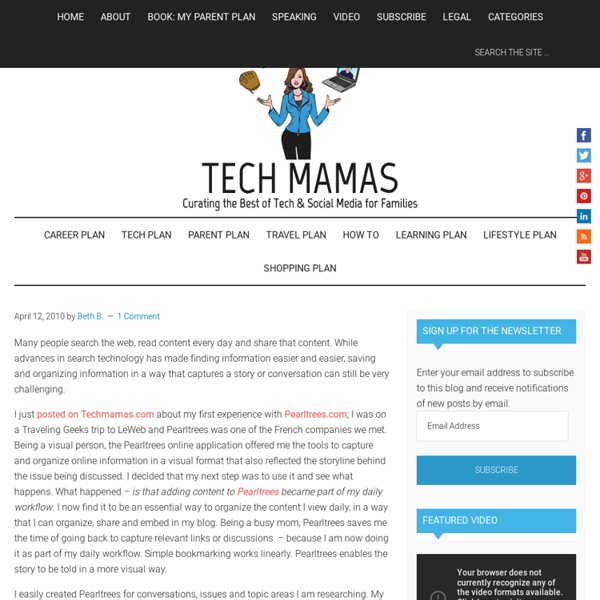 Many people search the web, read content every day and share that content. While advances in search technology has made finding information easier and easier, saving and organizing information in a way that captures a story or conversation can still be very challenging. I just posted on Techmamas.com about my first experience with Pearltrees.com; I was on a Traveling Geeks trip to LeWeb and Pearltrees was one of the French companies we met. I easily created Pearltrees for conversations, issues and topic areas I am researching. Months later, when I took on a project as adviser to Pearltrees, I had the opportunity to learn even more about the site and share the information I learned. The way many people currently organize web content is by using bookmarking sites, which are organized in a linear, menu-style format. A Pearltree is made up of Pearls. Listed above is a picture of my Firefox toolbar with the Pearltree buttons installed. 1. 2. 3. 4. 5. 6. 7. 8. 8.1 Intro screencast: The Pearl: 9.

Meet Pearltrees: Bookmarks with a social twist A French Web site, called Pearltrees, is developing a Web service that is trying to bring a social networking element to bookmarking - but with the connections based on content instead of people. Think Facebook and Twitter mixed with one Amazon's recommendation system. You don't add friends in Pearltrees. Instead, you add links. As you come across something on the Internet that interests you, something that you might have otherwise bookmarked or tweet, you put it in your personal pearltree - which is really like a "main folder," that contain the links themselves, called "pearls." Here's the trick: if there are others on Pearltree who have also posted that same URL into one of their own pearltrees, you are now connected and can see their other links. The service, which is free, is still in alpha mode and has limited functionality and exposure. For now, it's a bit buggy but the concept is pretty solid.

Bio For Beth Blecherman TechMama and TechMamas is a trademark of Beth Blecherman Short bio: Beth Blecherman is the Chief Technologist of Cool Mom Tech, the intersection between tech, parenting and style. She left her position as a Senior Manager at Deloitte for Family Management then decided to blog as a career 2.0. Her personal blog is TechMamas.com (@TechMama ), a platform,to discuss technology, social media and her obsession with consumer electronics.In 2006 she joined on as one of the Co-Founders to Silicon Valley Moms Group (a mom blog network that covered over 11 regions). In 2009 she was chosen as one of the Nielson Power Mom 50 influencers. Beth is a host of MommytoMommy.tv, a new online show for moms. TechMama Goes Hot Mama - Guest Celebrity from Kimberley Blaine on Vimeo. Her favorite conference is CES and she is proud to be on theBoard of Advisors (and speak at) for MommyTechSummit at CES. Beth consults with companies that have products for the family tech audience. TechMama in Books: 1.

The Curation Buzz... And PearlTrees Posted by Tom Foremski - April 12, 2010 My buddy Dave Galbraith is the first person I remember to first start talking about curation and the Internet, several years ago. He even named his company Curations, and created a tool/site for curation: Wists. And his site SmashingTelly - is great example of curation, a hand-picked collection of great videos. Today, much is written about curation and the Internet but it all seems mostly talk because we don't really have the tools we need. Robert Scoble writes about The Seven Needs of Real-Time Curators "... who does curation? Reading Robert Scoble's post on curation, it almost seemed as if he were describing PearlTrees, a company I've recently been working with in an advisory role, when he talks about "info atoms and molecules." ...what are info atoms? PearlTrees is very similar, it's a curation tool that uses "pearls" as a visual metaphor for a web site, a Twitter post, an image, or a video. More to come... Tweet this story Follow @tomforemski

Liveblogging Pillow Fight With My3Boys - Part One As I was frantically trying to sneak some blog posts in before bathtime tonight – about the tech conference I just came back from – I heard the dreaded words "P I L L O W F I G H T" coming from the other room where my 3 boys were playing. My husband is at a business meeting tonight, so there was no one else to "break it up". So what does a modern TechMama do in response to an impending pillow fight?

Pearltrees (@pearltrees) Screenshot tour: Pearltrees tries to be graphical Delicious of the future; fails Pearltrees is a fledgling social bookmarking service, which tries to break away from the tagging paradigm. Instead, each bookmark is a "pearl", and the pearls are linked into trees. You can see all of your bookmarks on a large Flash-based canvas, and drag them around. The site is tightly integrated with a Firefox add-on for creating "pearls". The idea sounded intriguing, so I decided to take the site + add-on combo for a spin. Since the site itself is so visual, I documented the tour in a series of screenshots which you can see after the jump. So here's the overview screenshot again, this time with a bit of an explanation: You can see the edge of the default "pearl tree" you get when you sign up, along with a thumbnail of a destination page (YouTube, in this case). The add-on creates three buttons next to your address bar. The add-on exposes its settings via a weird "Options" menu. This is another screenshot of the UI, because I just couldn't resist the spelling.

Apple iPad: Discussion of Features and The Name My first step in coverage of the Apple iPad was to understand the features not only as a techie but as a mom that appreciates mobile gadgets. Yesterday I posted a write-up with all the information I could find about the Apple iPad features. Looking at the Apple iPad features I listed yesterday, there were many that make the iPad a valuable tool, including it’s user friendly design and interface, attractive build and access to a large number of applications from the iPhone (140,000 as of today), entertainment media and eBook libraries. The features: While writing the post about the features I did wonder if the Apple iPad had a webcam as some had speculated before the official announcement. Walt Mossberg in his first impressions also mentioned the applications and build as a plus, but had questions about the comfort of using the virtual keyboard. The next question I had was if the Apple iPad supports Flash. 1. 2. The name “iPad”: The SUMMARY:

Pearltrees on the App Store