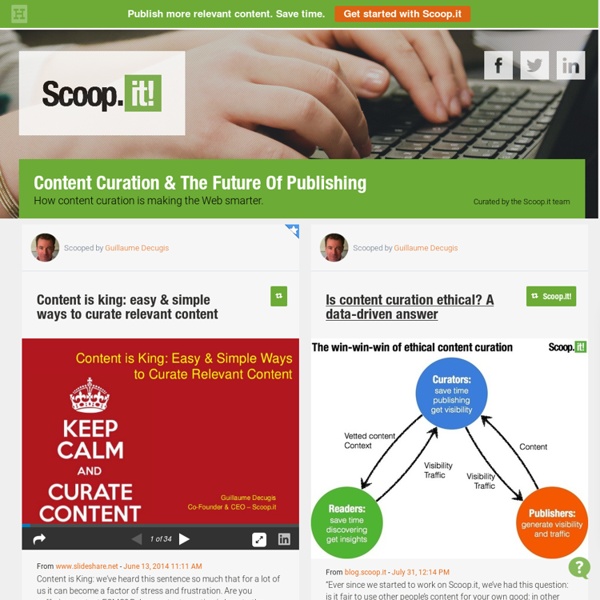 Creating vs. curating. If you work in marketing, or maybe even if you don't, I'm sure you've been a witness to this content debate at one point or another. There are numerous arguments for each side, and ultimately, both are included in any successful content strategy. The ideal mix between content curation and original content creation is a debate that I often find myself having with my colleagues and industry peers. So, in the spirit of Super Bowl XLVIII this weekend, I decided to ask the experts what they thought in a matchup that I've officially dubbed Content Super Bowl I.

Meta! Here’s how Storify looks telling the story of Storify At the TechCrunch Disrupt conference this week, one of the new tools to emerge — besides, that is, Lark, the new app that wakes you “silently, without a jarring alarm” — was Storify. Founded by Burt Herman (a former AP reporter and founder of the journotech meetup group Hacks/Hackers) and developer/entrepreneur Xavier Damman, the platform promises a new way to leverage the real-time power of social media for creating stories. It’s doubling down on the increasingly common assumption that the future of news will demand curation on the part of news producers.

Overwhelmed? Welcome the Age of Curation Forrester Research analyst Sarah Rotman Epps coined a phrase Friday for something many have been talking about since Apple launched the iPad about six weeks ago. “Curated computing” refers to the way Apple staff examines each piece of software written for iPhone OS devices before allowing it into (or blocking it from) the App Store. Epps is almost certainly not among the first 10,000 people on the planet to observe that the iPhone OS does not allow users to install whatever programs they wish, unless the devices are jailbroken. Future of Curation: 5 Ways Curation is Changing Curation is everywhere these days. If you have not heard, it’s made a mark in almost every area of the online world. In the past year alone, content curation has been on the front page of the New York Times, no less than 3 times.

The curator attributes and skills What skills do I need to have if I want to be an effective real-time news curator? Can I just pick the best headlines and links on my topic of interest or do I need to do know / do more? What makes a great news curator stand out from those who do automatic aggregation or from bloggers who create simple news stories lists? Photo credit: thesuperph In the previous parts of this Guide to Real-Time News Curation I have looked at what are the key problems giving way to the emergence of real-time news curation, at the differences between automatic aggregation and filtering and human-powered manual curation. I have also spent some time illustrating some real-world examples of both automated aggregation and human curated news content.

Internet censorship Internet censorship is the control or suppression of what can be accessed, published, or viewed on the Internet. It may be carried out by governments or by private organizations at the behest of government, regulators, or on their own initiative. Individuals and organizations may engage in self-censorship for moral, religious, or business reasons, to conform to societal norms, due to intimidation, or out of fear of legal or other consequences.[1] Breure The journal article is still the basis of scholarly communication. This genre, however, largely adheres to the rules of the printed publication and does not meet the requirements of this age of digital Web publishing. Today we do not need to restrict ourselves any longer to communicating the results of the research process only. We can also allow readers to inspect the underlying data online, to publish their own comments and, using a variety of multimedia content, to be witness to intermediary stages of the scientific discovery process.

Shaping the Future of Curation Session Title: The Future of Content CurationSpeakers: Steve Rosenbaum, Eric Hippeau, Francine Hardaway, Ed LambletDate: Thursday May 26Time: 11:30AMLocation: Jacob Javits Center 1A18 … by Francine Hardaway “Information overload” is an inherent part of the daily experience for most of us – especially online. The web has disintermediated the flow of information, making it easy for anyone to easily receive and share news, videos, comments, and other content.