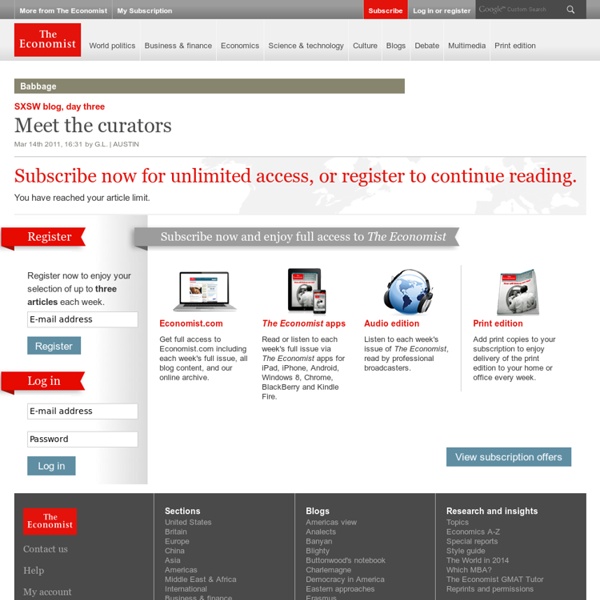 Blog Archive » The Web’s third frontier Everyone realizes that the web is entering a new phase in its development. One indication of this transition is the proliferation of attempts to explain the changes that are occurring. Functional explanations emphasize the real time web, collaborative systems and location-based services. Technical explanations argue that the interconnectivity of data is the most significant current development. They consider the web’s new frontiers to be closely related to the semantic web or the “web of things”. Content Curation Is Listening and Engaging Content curation is the organizing, filtering and “making sense of” information on the web and sharing the very best pieces of content that you’ve cherry picked with your network. But finding and organizing the information is only half of the task. As Mari Smith points out in this video about why curation is important and some tools for doing it. By sharing the information and giving credit to the source where you found the link, you build relationships and a network. I used to describe this process as “Listening and Engaging” but really like focusing it the process around a content strategy – makes listening and engaging much more actionable. Last week, I helped launch a peer exchange for Packard Foundation for Children’s Health Insurance grantees with Spitfire Communications (creators of the SMART chart).

Points Forward: Kerwin Kaye, “Drug Courts and the Treatment of Addiction: Therapeutic Jurisprudence & Neoliberal Governance” Editor’s Note: Today marks the first in a new series, “Points Forward,” where your intrepid editors interview recent PhDs in the field of alcohol and drugs history and policy. Our goal in this is to showcase some of the newest and boldest work in the field, obviously, but we also want to take advantage of the blog’s capacity as a social networking site. As anyone who’s been following Points for the last eleven months knows by now, our purview ranges across the disciplinary and methodological, generic and generational boundaries that, too often these days, give shape to (read: prop up) the contemporary university.

Why Impresarios (Not Algorithms) Will Rule Web Video According to a number of predictors, and my friends, 2011 is going to be the year of curated video. The old, algorithmic approach is out, and instead we'll see audiences flocking to videos selected for your viewing pleasure by friends (in the case of Facebook) and experts (maybe even from YouTube). Yes, it looks like "curation" is bound to be the first big buzzword of 2011. But when it comes to video, before there was curation there was programming.