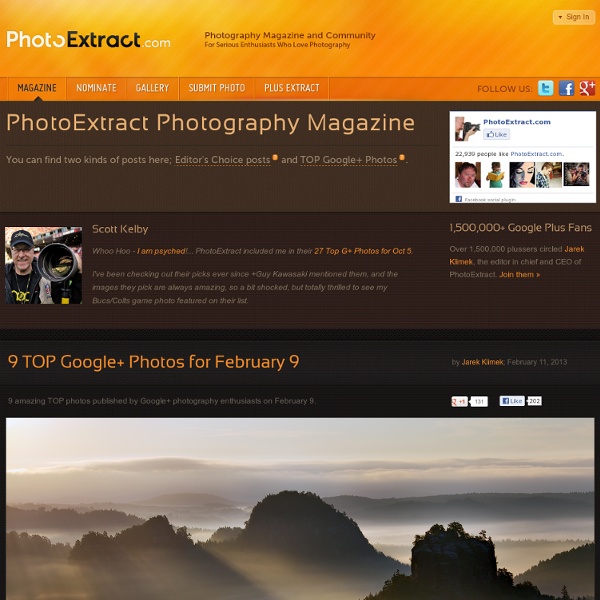 Matt Wisniewski combines old and new in his beautiful photo collages. Some people create images to make a statement. Others, like Matt Wisniewski, do it because it looks pretty. “It’s mostly just aesthetic,” explains the 21-year-old computer science student of his spectral photo collages. A Beginner's Guide To Digital Photography You may think that picking up a digital camera, turning it on, and taking the photo is all that you need to know about digital photography. Think again, as there is a whole heap more to learn that you might not even realize. MakeUseOf proudly presents this free 59 page guide. It’s jammed packed full of useful information for all type of photographers – from beginners to advance photographers.

Trees Cocooned in Webs After Flood Photograph courtesy Russell Watkins, U.K. Department for International Development Trees shrouded in ghostly cocoons line the edges of a submerged farm field in the Pakistani village of Sindh, where 2010's massive floods drove millions of spiders and possibly other insects into the trees to spin their webs. Beginning last July, unprecedented monsoons dropped nearly ten years' worth of rainfall on Pakistan in one week, swelling the country's rivers. The water was slow to recede, creating vast pools of stagnant water across the countryside.

The Photojojo Store! - the Most Awesome Photo Gifts and Gear for Photographers What In The?!: INSANE Posed Ant Photography Russian photographer Andrey Pavlov takes insane macro pictures of LIVE ants by spending hours and hours playing with them and posing them to get the perfect shot. I...can't even believe half of them are real. Of course I have zero experience posing ants and have only burnt them with a magnifying glass, so maybe it's actually easier than I thought. Hit the jump for a smattering of the VERY worthwhile shots, and a link to the entire collection with a ton more. Artist's Gallery (with a TON more) viaAmazing Ant Photography [incrediblethings] Thanks to bb, who's never ruined a picnic.

15 Beautiful & Mystical Space Photos These eerie, dark, pillar-like structures - part of the Eagle Nebula - are columns of cool, interstellar hydrogen gas and dust that serve as incubators for new stars - Hubble Space Telescope 1995. On its 100,000th orbit of planet Earth, the Hubble Space Telescope peered into a small portion of the Tarantula Nebula near the star cluster NGC 2074, unveiling its stellar nursery. The region is a firestorm of raw stellar creation, triggered perhaps by a nearby supernova. 3. Wolf-Rayet Star The massive star a Wolf-Rayet star, is the bright blue one near the center of the nebula.

22 Crazy Perspective Photos Taken With a GoPro Camera Chances are that if you're into extreme sports, you already know about GoPro, the company that makes small, wearable, waterproof and shockproof cameras. Founder Nick Woodman was inspired to start a company dedicated to adventure photography after a 2002 surfing trip to Australia. Hoping to capture incredible images, he soon discovered that high quality equipment could not be obtained for reasonable prices. So, he decided to start a company where everyday people could capture professional-like shots. Hence, the company's name "GoPro." 12 Creative Family Portraits I thought we'd end the week with a collection of creative family portraits. Though the holidays are now officially over (and there's no more Christmas "photo" cards to be made), you can still take pictures of your family in any number of creative ways. We've rounded up 10 ideas that include everything from simply layering your family's hands to using a small chalkboard as a prop. Our favorite idea is the one above, that just features colorful rain boots in the air. "Part of my sister's family holiday card for this year," states Kathy on Flickr. "6 kids and 1 mom."

National Geographic Photo Contest 2011 - Alan Taylor - In Focus National Geographic is currently holding its annual photo contest, with the deadline for submissions coming up on November 30. For the past nine weeks, the society has been gathering and presenting galleries of submissions, encouraging readers to vote for them as well. National Geographic was kind enough to let me choose among its entries from 2011 for display here on In Focus. Gathered below are 45 images from the three categories of People, Places, and Nature, with captions written by the individual photographers. [45 photos] Photo dictionary - photo/picture definition at Photo Dictionary in English