Maria Popova: In a new world of informational abundance, content curation is a new kind of authorship 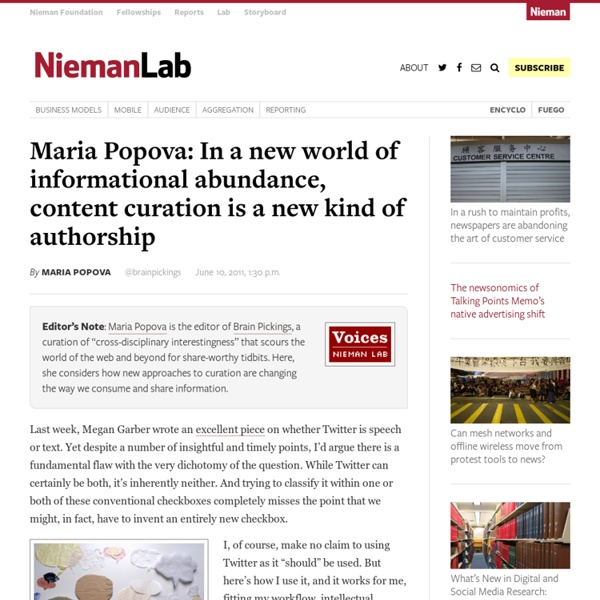 Editor’s Note: Maria Popova is the editor of Brain Pickings, a curation of “cross-disciplinary interestingness” that scours the world of the web and beyond for share-worthy tidbits. Here, she considers how new approaches to curation are changing the way we consume and share information. Last week, Megan Garber wrote an excellent piece on whether Twitter is speech or text. I, of course, make no claim to using Twitter as it “should” be used. Twitter as discovery Like any appropriated buzzword, the term “curation” has become nearly vacant of meaning. When it comes to this curatorial, directional model of Twitter as a discovery mechanism, applying the conventions of speech or text to it is largely moot. And lest we forget, text itself is an invention, a technology. Nicholas Carr’s The Shallows is the contemporary equivalent of these Socratic fears. Directional attention So where does Twitter fit in? Curation as authorship The second issue is something I feel particularly strongly about.

Aquí, de omnibus dubitandum | Las dudas deleznables de una mente dispersa Maria Perez > Blog > Curating Content on Twitter for Thought Leadership This is the first in a series of recaps from RealTime NY (formerly TWTRCON). The one-day conference, held at B.B. King Blues Club in New York, was jam-packed with sessions, workshops, and case studies on mobile, social and real-time Web. In this workshop, Angela Dunn (@blogbrevity) talked about how to curate content on Twitter for thought leadership. Content Curation Content curation is the art and science of finding, organizing, and sharing information that adds value and encourages engagement for the audience you’re hoping to influence. “Your goal is to grow a community,” said Dunn. According to Dunn, almost 80 percent of companies are curating content for thought leadership. There are three main principles to content curation: Expertise with a point of view. Your network has a value. Dunn also shared three professional topic spheres for content: Subject-matter expertise: 70 percentIndustry-related subtopics: 20 percentPersonal topics of interest: 10 percent Starting Out Twitter Chats

Capitalizing On Curation: Why The New Curators Are Beating The Old Barring the invention of a "time turner" like the one Hermione Granger sported in 3rd Harry Potter novel, most of us will never have enough time to consume the information we might otherwise want to absorb. There's simply too much info and too few waking hours. Enter the notion of curation, a relatively new term that is not unlike the editor of old, a trusted person or organization that filters information and aggregates it in an organized fashion for others to enjoy. According to Steve Rosenbaum, author of Curation Nation, "curation is the new way of organizing the web going forward." You can't curate for everyone, so be targetedIn Brian Solis's recent tribute on FastCompany.com to Rosenbaum's book, Solis noted, "the social capital of a curator is earned through qualifying, filtering, and refining relevant content." Thrillist, for the uninitiated, started in 2005 with a newsletter to 600 New Yorkers and is now in 18 markets with 2.5 million subscribers.

curator's ǝpoɔ 5 Ways Curation and Content Automation Increases Engagement Guest blogger Chase McMichael is founder, president and CEO of social intelligence company InfiniGraph. A veteran of realtime collaboration technologies at companies such as Oracle, Sprint and Chase Manhattan Bank. McMichael has been awarded numerous patents and is a frequent speaker on social media technologies. I recently attended the book release party for “Curation Nation: How to Win in a World Where Consumers are Creators” by author Steve Rosenbaum. It was mentioned at the party, and by some reports, that every two days we now create more content than was created from the beginning of time until 1993. I’m not entirely sure of the validity of that claim but, even if it’s an exaggeration by an order of magnitude, we’re still talking about an insane amount of content being created every single day. The major challenges are how to sort and filter through all this content to make sense of it. Enter crowdsourcing. Your customers know what they like. Ok! Facebook is not the same as Twitter.

Twitter and the Anti-Playstation Effect on War Coverage As I follow the remarkable political transformations ongoing in the Middle East and North Africa through social media, I’m struck by the depth of the difference between news curation and anchoring on Twitter versus Television. In this post, I’d like to argue that Television functions as a distancing technology while social media works in the opposite direction: through transparency of the process of narrative construction, through immediacy of the intermediaries, through removal of censorship over images and stories (television never shows the truly horrific pictures of war), and through person-to-person interactivity, social media news curation creates a sense of visceral and intimate connectivity, in direct contrast to television, which is explicitly constructed to separate the viewer from the events. Although it is the first factor most people think of, I believe that the distancing effect of TV isn’t just because TV is broadcast and social media is interactive.

Introducing The Curator's Code: A Standard for Honoring Attribution of Discovery Across the Web by Maria Popova UPDATE: Some thoughts on some of the responses, by way of Einstein. UPDATE 2: This segment from NPR’s On the Media articulates the project well — give it a listen. Ours is a culture and a time immensely rich in trash as it is in treasures.” ~ Ray Bradbury You are a mashup of what you let into your life.” ~ Austin Kleon Chance favors the connected mind.” ~ Steven Johnson As both a consumer and curator of information, I spend a great deal of time thinking about the architecture of knowledge. Until today. I’m thrilled to introduce The Curator’s Code — a movement to honor and standardize attribution of discovery across the web. One of the most magical things about the Internet is that it’s a whimsical rabbit hole of discovery — we start somewhere familiar and click our way to a wonderland of curiosity and fascination we never knew existed. In both cases, just like the words “via” and “HT,” the respective unicode character would be followed by the actual hotlink to your source.

Myrstad's Blog » Blog Archive » Content Curation – Growing Up and Coming of Age The impetus to this blog post (developed via curation and creation), was my fascination when I came across the following story that broke in the middle of May: ”Man tracks stolen laptop hundreds of miles away, calls thief”. – A very real example of what is going on in the content curation space today. @seanpower (Sean Power), an Ottawa, Canada native living in New York, was on a visit to Canada (without his laptop), when he discovered, through his Prey software, that his laptop was in the hands’ of a stranger back in New York. Immediately, the tweeting began. As the story evolved, Sean Power managed to follow his travelling laptop as a victim, as a private person, with an alias, eventually identifying the person who had stolen it and moving a potential criminal case to its conclusion and positive solution – all through communication via social media and with the help of various different stakeholders. Something is happening. Content Curation is evolving. Let’s look at some key figures: And

Power Tools for Content Aggregation and Curation Maybe you don't have the resources to develop a lot of content, or maybe you're a professional association that wants to serve its members better by being super helpful. Add that there are many more content creators, inside and outside organizations, and you see how curating information as content strategy could be a very elegant option. Noting the evolution on the World Wide Web quickly to show you a pattern that went in lockstep with use. Each set of tools building on the next, thriving when filling a specific need, and evolving or morphing into something else as appropriate. Real time logs I suppose I'm quite old fashioned to be still using a blogging platform in a blog format to publish content. Moving away from blogs and into easy-to-use real time publication and bookmarking tools, you now have a couple of solid options. Tumblr is a re-envisioning of tumblelogging, a subset of blogging that uses quick, mixed-media posts. Here's a guide to switch to Posterous from dying platforms.