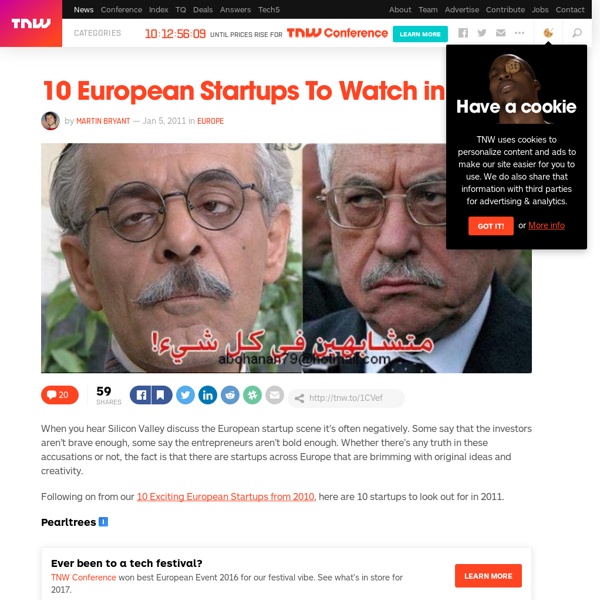 When you hear Silicon Valley discuss the European startup scene it’s often negatively. Some say that the investors aren’t brave enough, some say the entrepreneurs aren’t bold enough. Whether there’s any truth in these accusations or not, the fact is that there are startups across Europe that are brimming with original ideas and creativity. Following on from our 10 Exciting European Startups from 2010, here are 10 startups to look out for in 2011. Pearltrees Visitors to the LeWeb conference last month couldn’t have failed to spot Pearltrees. Pearltrees makes organising groups of links to content incredibly easy. Recent additions to the service include real-time group collaboration and a touch-screen based interface which will be ported to the iPad soon. Planely The idea behind Planely is a certainly niche one, but the Danish startup could well be onto something that frequent air travellers will love. Geomium LikeOurselves Storific Datasift SuperMarmite Viewdle Screach Shutl

Black macaque takes self-portrait: Monkey borrows photographer's camera By Daily Mail Reporter Created: 10:08 GMT, 4 July 2011 To capture the perfect wildlife image, you usually have to be in exactly the right place at precisely the right time. But in this instance, David Slater wasn’t there at all and he still got a result. Visiting a national park in North Sulawesi, Indonesia, award-winning photographer Mr Slater left his camera unattended for a while. It soon attracted the attention of an inquisitive female from a local group of crested black macaque monkeys, known for their intelligence and dexterity. Fascinated by her reflection in the lens, she then somehow managed to start the camera.

Qwiki Just May Be The Future Of Information Consumption. And ... In the late 1980s, Apple created a few concept videos about a device they called the Computer Knowledge Navigator. These videos came up recently when Apple unveiled the iPad, because the machine in the videos is a tablet computer. But that’s about all the iPad has in common with this conceptual device. Guide to Evaluating Startup Ideas - Tony Wright's Startup Front-End - A great developer I once worked with was kvetching at lunch one day. He’d been working at a well-funded startup for about a year and had come to terms with the fact that the startup was really a pretty dumb idea. He’d wasted a year of his life and had a pile of stock options that weren’t very interesting. Play Wonderputt Check your security settings Connection issues are typically caused by security settings on your network or computer. Check that your firewall or router has port 5222 open and allowing traffic. If you are on a school or office network, you may need to contact your network administrator to make the necessary changes. Is your version of Flash current?

Qwiki Founder: how I launched a talking search engine - HuffPo The tech world has been buzzing ever since judges at TechCrunch Disrupt named Qwiki 2010's most disruptive company. Qwiki's on-stage demonstration at September's contest between 27 rising startups not only earned the company a $50,000 cash prize, but it has quickly become a YouTube sensation. The startup's first product is a multimedia answer to Google's flagship text-based search tool. Users type in a search term and Qwiki pulls information from the Web and narrates the results in a computerized voice while displaying related media. Last week, Qwiki's CEO and co-founder, Doug Imbruce, came by The Huffington Post to show us how Qwiki works. Imbruce, 27, also explained how he convinced the "father of the internet search" to join on as co-founder and CTO, and why entrepreneurs should "avoid venture capital firms at all costs."

Black swan theory The black swan theory or theory of black swan events is a metaphor that describes an event that comes as a surprise, has a major effect, and is often inappropriately rationalized after the fact with the benefit of hindsight. The theory was developed by Nassim Nicholas Taleb to explain: The disproportionate role of high-profile, hard-to-predict, and rare events that are beyond the realm of normal expectations in history, science, finance, and technology.The non-computability of the probability of the consequential rare events using scientific methods (owing to the very nature of small probabilities).The psychological biases that blind people, individually and collectively, to uncertainty and to a rare event's massive role in historical affairs. Unlike the earlier philosophical "black swan problem", the "black swan theory" refers only to unexpected events of large magnitude and consequence and their dominant role in history. Background[edit]

BACK TO THE FUTURE : Irina Werning - Photographer I love old photos. I admit being a nosey photographer. As soon as I step into someone else’s house, I start sniffing for them. Most of us are fascinated by their retro look but to me, it’s imagining how people would feel and look like if they were to reenact them today… Two years ago, I decided to actually do this. So, with my camera, I started inviting people to go back to their future.. Now its time for KOREA, TAIWAN AND TOKYO. The Search Engine That Talks Back to You &quot; OWNI.eu, News ... We are incredibly attuned to the idea that the sole purpose of our technology is to solve problems. It also creates concepts and philosophy. We must more fully explore these aspects of our inventions, because the next generation of technology will speak to us, understand us, and perceive our behavior. It will enter every home and office and intercede between us and much of the information and experience we receive.

The Black Swan (Taleb book) book about mathematical finance The Black Swan: The Impact of the Highly Improbable is a 2007 book by author and former options trader Nassim Nicholas Taleb. The book focuses on the extreme impact of rare and unpredictable outlier events—and the human tendency to find simplistic explanations for these events, retrospectively. Taleb calls this the Black Swan theory. The book covers subjects relating to knowledge, aesthetics, as well as ways of life, and uses elements of fiction and anecdotes from the author's life to elaborate his theories.

Will the Next Zuckerberg Be a Designer, not a Hacker? Track record: This sketch from 500 Startups, a tech incubator, shows examples of technology companies whose founders included designers along with engineers. Facebook, Google, Apple: all companies that were started by hackers of one kind or another, grew fast, and changed the world. It’s a model that still motivates computer scientists and engineers who bet everything on their own tech startups. But the next company to join that list of successes may be founded by a designer, not a hacker, if the backers of a new Silicon Valley investment fund are right. The Designer Fund will focus on companies led by Web and product designers rather than solely engineers, in hopes of creating more tech startups that specialize in compelling user experiences. The fund is being put together by 500 Startups, a company that acts as an incubator for early-stage tech companies, trading seed funding and mentoring for a stake in a venture.