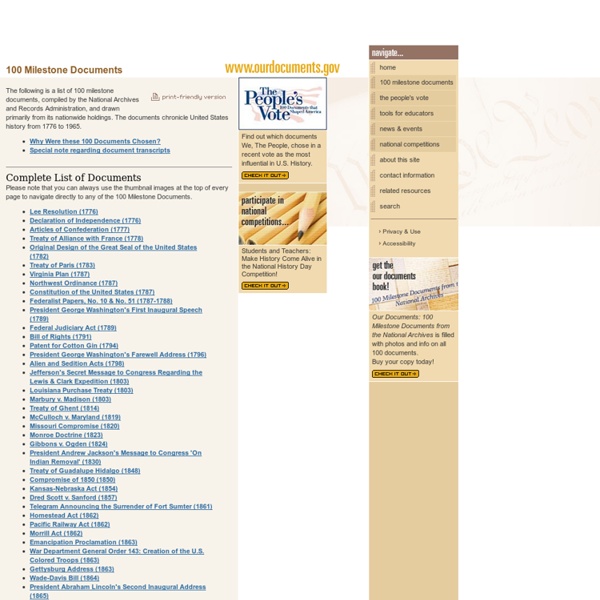 The following is a list of 100 milestone documents, compiled by the National Archives and Records Administration, and drawn primarily from its nationwide holdings. The documents chronicle United States history from 1776 to 1965. Complete List of Documents Please note that you can always use the thumbnail images at the top of every page to navigate directly to any of the 100 Milestone Documents. home 100 milestone documents the people's vote tools for educators news & events national competitions about this site contact information related resources search Privacy & Use Accessibility Related:  USA's historie • Government

100 Scientists On Twitter By Category While scientists may have a reputation for being anti-social, when it comes to using social media you’ll find the best and brightest in diverse scientific fields taking full advantage of the chance to connect with laymen and other scientists alike. Twitter is full of opportunities to hear what these scientists have to say, follow their work, and even start a conversation. Here, we’ve collected 100 amazing scientists that use Twitter (listed by category, not ranking) that provide perfect reading material for anyone hoping to learn more about a field or just keep up with the latest in research and writing on some seriously interesting topics. Extraplanetary Sciences From astronomy to rocket science, these scientists are dedicating their careers to exploring what lies beyond our own planet. @SethShostak: Astronomer Seth Shostak offers up insights into the cosmos through great links to space news in this feed. Biology Chemistry Earth Sciences Environmental Science Physics Health and Medicine

Anti-Saloon League Museum | Westerville Public Library What was the Anti-Saloon League? From 1893 to 1933, the Anti-Saloon League was a major force in American politics. Influencing the United States through lobbying and the printed word, it turned a moral crusade against the manufacture, sale and consumption of alcohol into the Prohibition Amendment to the United States Constitution. Under the motto "The Saloon Must Go," the organization worked to unify public anti-alcohol sentiment, enforce existing temperance laws and enact further anti-alcohol legislation. At first, the League appealed to local churches to carry its message to the people. The League was able to promote the temperance cause by publishing thousands of fliers, pamphlets, songs, stories, cartoons, dramas, magazines and newspapers. How can I find more information? This website was created based on a large collection of Anti-Saloon League documents and artifacts, bequeathed to the Westerville Public Library.

POL310 American Government Upload csuDHTV Loading... Working... ► Play all POL310 American Government csuDHTV12 videos564 viewsLast updated on Apr 18, 2014 Play all Sign in to YouTube Sign in History Sign in to add this to Watch Later Add to Loading playlists... Sarcasm « Grammarsaurus Rex What Alanis Morissette did with her song “Ironic” to confuse a generation of neon-fanny-pack-wearing, Legends of the Hidden Temple-watching, Surge-chugging, Third Eye Blind-listening, Topanga-crushing, Beanie Babies-hoarding, Duck Hunt gun-wielding ’90s kids, hipsters have done with their commitment to faux-irony to confuse a generation of … I don’t know, what defines us now? … people who miss living in the ’90s. What a mantra. … oh, really? [But dude, weren't Tamagotchis totally awesome?] Let me also say that I’m not really a fan of anti-hipster humor for this reason: it’s not funny or original. One very real problem hipsters have created, though, is a resurgence of a confusing use of the word “irony.” And hipsters, hear me: I do not ever want to re-visit Opposite Day. Opposite Day caused me my second true existential crisis at the age of eight. Let’s talk about irony. There are quite a few different types of irony: verbal irony, dramatic irony, socratic irony, historical irony, etc.