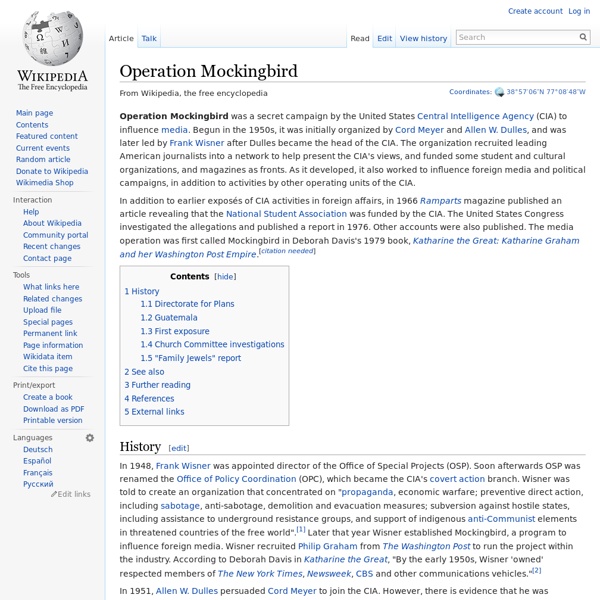 Related:  The Company and Friends

Operation Northwoods Operation Northwoods memorandum (13 March 1962)[1] Operation Northwoods was a series of false flag proposals that originated within the Department of Defense (DoD) and the Joint Chiefs of Staff (JCS) of the United States government in 1962. The proposals, which called for the Central Intelligence Agency (CIA), or other operatives, to commit acts of terrorism in US cities and elsewhere, were rejected by the Kennedy administration.[2] At the time of the proposal, Cuba had recently become communist under Fidel Castro. The operation proposed creating public support for a war against Cuba by blaming it for terrorist acts.[3] To this end, Operation Northwoods proposals recommended hijackings and bombings followed by the introduction of phony evidence that would implicate the Cuban government. Several other proposals were included within Operation Northwoods, including real or simulated actions against various US military and civilian targets. Origins and public release[edit] Content[edit] [edit]

How Neocons Constrain Obama's Message Cross-posted from Consortium News President Barack Obama touches the Marshall Plaque at Michie Stadium upon arrival for the United States Military Academy at West Point commencement in West Point, N.Y., May 28, 2014.(image by (Official White House Photo by Pete Souza)) As American neocons continue to shape the narratives that define the permissible boundaries for U.S. foreign policy thinking, the failure to enforce any meaningful accountability on them for their role in the criminal and disastrous invasion of Iraq has become painfully clear. In any vibrant democratic system, it would be unthinkable that the neocons and other war hawks who yahooed the United States into Iraq a little more than a decade ago would still be exercising control over how Americans perceive today's events. Yet, you're not supposed to know that. But don't worry: the careers of Diehl and Hiatt didn't suffer. And, if Hiatt and his editorial board had their way, American troops would still be patrolling Iraq. Mr.

The mother of all lies | The Yellow Brick Road Free Blog The story of babies torn from incubators by Iraqi soldiers during the first Gulf War is the latest demonstration of a principle long understood by propagandists, that a lie repeated many times ends up being accepted as truth. The blurring of boundaries between truth and myth is certainly not started with the Bush administration. The misinformation was part of the war at least since the days of Alexander the Great, who disseminava large shells along the path of his troops in retreat, the enemy into believing that his soldiers were giants. The trick anecdote about Alexander the Great is usually told the soldiers in the first lesson of training in psychological operations (often called “psyops”). In 1998 the U.S. The document contains sections entitled Information Operations "psychological operations", "electronic warfare", "information attack", and "military deception". All the big media events require that journalists and advertisers call “hooking”. Like this: Like Loading...

Carl Bernstein, CIA & The Media After leaving The Washington Post in 1977, Carl Bernstein spent six months looking at the relationship of the CIA and the press during the Cold War years. His 25,000-word cover story, published in Rolling Stone on October 20, 1977, is reprinted below. How Americas Most Powerful News Media Worked Hand in Glove with the Central Intelligence Agency and Why the Church Committee Covered It Up In 1953, Joseph Alsop, then one of America’s leading syndicated columnists, went to the Philippines to cover an election. He did not go because he was asked to do so by his syndicate. Alsop is one of more than 400 American journalists who in the past twenty‑five years have secretly carried out assignments for the Central Intelligence Agency, according to documents on file at CIA headquarters. The history of the CIA’s involvement with the American press continues to be shrouded by an official policy of obfuscation and deception for the following principal reasons: ■ Stringers2 and freelancers. C.L.

Lake Superior nearing rare ice-over By John MyersForum News Service Posted: 02/06/2014 12:01:00 AM CST | Updated: 3 months ago DULUTH, Minn. -- A frigid winter is pushing Lake Superior toward a complete ice-over for the first time since 1996, though there's still a ways to go before you can skate from Duluth to the Soo Locks. Lake Superior had at least some ice across an estimated 91 percent of its surface as of Thursday, according to the Great Lakes Environmental Research Laboratory. That compares with the 40-year average annual Lake Superior ice coverage for February of just 30 percent. George Leshkevich has been tracking Great Lakes ice for the National Oceanic and Atmospheric Administration Great Lakes Environmental Research Laboratory since 1973. So far, this winter has had among the most rapid ice buildups of his tenure. The widespread ice in January and early February this year "wouldn't have been anomalous back in the '70s or with some of the winters in the mid-'90s.

CIA Document 1035-960: Foundation of a Weaponized Term “Conspiracy theory” is a term that at once strikes fear and anxiety in the hearts of most every public figure, particularly journalists and academics. Since the 1960s the label has become a disciplinary device that has been overwhelmingly effective in defining certain events off limits to inquiry or debate. Especially in the United States raising legitimate questions about dubious official narratives destined to inform public opinion (and thereby public policy) is a major thought crime that must be cauterized from the public psyche at all costs. Conspiracy theory’s acutely negative connotations may be traced to liberal historian Richard Hofstadter’s well-known fusillades against the “New Right.” Yet it was the Central Intelligence Agency that likely played the greatest role in effectively “weaponizing” the term. In the groundswell of public skepticism toward the Warren Commission’s findings on the assassination of President John F. Republished at GlobalResearch.ca on January 22, 2013.

Asbestos IV: Conspiracy Theory in Asbestos Litigation | Verdict for Investors Introduction Since Johns Manville filed for bankruptcy in 1982, asbestos litigation has bankrupted 71 companies, but the disappearance of these original defendants has not stopped the plaintiffs’ attorneys from litigating asbestos claims. Rather, plaintiffs’ attorneys have developed theories on which to name new defendants. One principal theory is liability through conspiracy. Cases involving conspiracy theory arise in two different contexts. Although all states recognize conspiracy, liability is usually based on the damage caused by the underlying tort. Advantages of Conspiracy Theory Cases alleging conspiracy theories give plaintiffs a number of significant advantages: 1. 2. 3. 4. Historical Development Defendants’ raised two arguments against recognizing conspiracy in the asbestos cases: 2- There can be no actionable wrong in suppressing knowledge about the dangers of asbestos unless the defendant had a duty to warn, and no defendant has a general duty to the public to warn.

Operation Mockingbird: CIA Media Manipulation The "old boy network" of socializing, talking shop, and tapping each other for favors outside the halls of government made it inevitable that the CIA and Corporate America would become allies, thus the systematic infiltration and takeover of the media. Under the guise of 'American' objectives and lack of congressional oversight, the CIA accomplish their exploits by using every trick in the book (and they know quite a few) that they actually teach in the notorious "School of the Americas", nicknamed the "School of Dictators" and "School of Assassins" by critics. The Association for Responsible Dissent estimates that 6 million people had died by 1987 as a result of CIA covert operations, called an "American Holocaust" by former State Department official William Blum. In 1948, the CIA recreated its covert action wing called the Office of Policy Coordination with Wall Street lawyer Frank Wisner as its first director. "Who Controls the Media? One of the primary reasons John F.

Related:
Related:  The Company and Friends