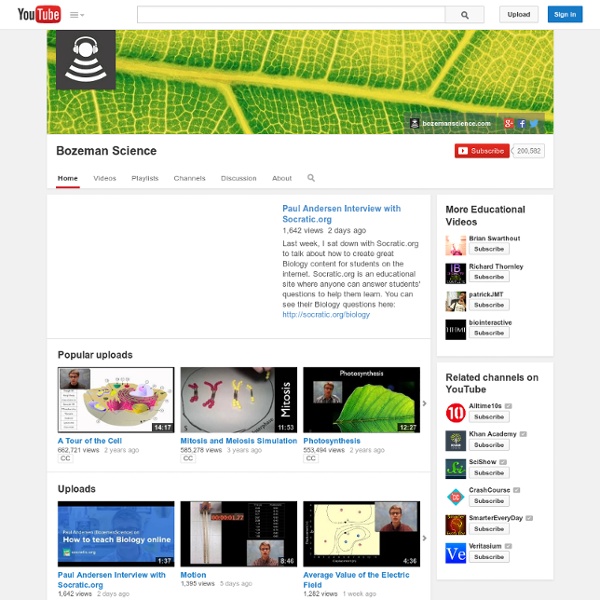 Flipped learning: A response to five common criticisms One of the reasons this debate exists is because there is no true definition of what “flipped learning” is. Over the past few years, the Flipped Learning method has created quite a stir. Some argue that this teaching method will completely transform education, while others say it is simply an opportunity for boring lectures to be viewed in new locations. While the debate goes on, the concept of Flipped Learning is not entirely new. Science Toys Science toys help kids become interested in science, while also being a source of entertainment. They can plant the seeds for future scientific exploration and even a career in the sciences. In addition to being very educational, the right toy can mesmerize a child for hours as they learn how it works and figure out the nuances of its operation. It can definitely help give them that all important head start in school as they begin their studies in science.

100 Coolest Science Experiments on YouTube Although YouTube has something of a reputation as a repository for the inane mental diarrhea of stunted man-children injuring each other for cheap laughs or shrill teenage drama queens shrieking like harpies over the latest bland, interchangeable lump passing as the epitome of masculine beauty, many others thankfully take advantage of its services as a portal to share their knowledge and educate viewers. While few of the scientific offerings formally follow the scientific method or test an explicitly stated hypothesis, even those videos veering more towards demonstrating various principles, theories, and laws still offer visitors a chance to learn something about how the world around them operates. By this point, it should go without saying that many of the following videos contain procedures that may be dangerous to perform at home or without the proper equipment and/or training. Please do not duplicate any of these experiments unless assured that they are entirely safe for amateurs.

Ending the 'tyranny of the lecture' Harvard professor Eric Mazur reveals how he uses peer instruction to make learning more dynamic—and how new software can facilitate this process By Dennis Pierce, Editor Read more by Dennis Pierce July 27th, 2011 Students need to assimilate information before they can apply it to a different context, Mazur said. At an educational technology conference in Boston July 27, Harvard University physics professor Eric Mazur explained how he uses “peer instruction” to help his students engage in deeper learning than traditional lectures can provide—and he unveiled a brand-new ed-tech service that can help educators take this concept to a whole new level. Mazur used a simple experiment to drive home his point that lecturing is an outdated—and largely ineffective—strategy for imparting knowledge.

Science definition - What is science? Science Definition The word science comes from the Latin "scientia," meaning knowledge. How do we define science? According to Webster's New Collegiate Dictionary, the definition of science is "knowledge attained through study or practice," or "knowledge covering general truths of the operation of general laws, esp. as obtained and tested through scientific method [and] concerned with the physical world." What does that really mean? Ten Recent Advances in Evolution By Carl Zimmer Posted 10.26.09 NOVA To celebrate the 150th anniversary of the Origin of Species, here's a list—by no means exhaustive—of some of the biggest advances in evolutionary biology over the past decade. These advances include not just a better understanding of how this or that group of species first evolved, but insights into the evolutionary process itself. In some cases those insights would have given Darwin himself a pleasant jolt of surprise. Ten significant leaps forward in evolution research in the past decade, as chosen and described by noted science writer Carl Zimmer Enlarge Photo credit: (Earth) © NASA; (text) © WGBH Educational Foundation

125 Great Science Videos: From Astronomy to Physics & Psychology Astronomy & Space Travel A Brief, Wondrous Tour of Earth (From Outer Space) - Video - Recorded from August to October, 2011 at the International Space Station, this HD footage offers a brilliant tour of our planet and stunning views of the aurora borealis.A Universe from Nothing - Video - In 53 minutes, theoretical physicist Lawrence Krauss answers some big enchilada questions, including how the universe came from nothing.A Year of the Moon in 2.5 Minutes - Video - The Lunar Reconnaissance Orbiter has been orbiting the moon for over a year. The footage gets compressed into 2 slick minutes.A Day on Earth (as Seen From Space) - Video - Astronaut Don Pettit trained his camera on planet Earth, took a photo once every 15 seconds, and then created a brilliant time-lapse film.Atlantis's Final Landing at Kennedy Space Center - Video - After more than 30 years, the space shuttle era comes to a close. Video runs 30 minutes. Physics Biology & Chemistry

Move Over Harvard And MIT, Stanford Has The Real “Revolution In Education” Lectures are often the least educational aspect of college; I know, I’ve taught college seniors and witnessed how little students learn during their four years in higher education. So, while it’s noble that MIT and Harvard are opening their otherwise exclusive lecture content to the public with EdX, hanging a webcam inside of a classroom is a not a “revolution in education”. A revolution in education would be replacing lectures with the Khan Academy and dedicating class time to hands-on learning, which is exactly what Stanford’s medical school proposed last week. Stanford realizes that great education comes from being surrounded by inspiring peers, being coached by world-class thinkers, and spending time solving actual problems.

Science Fair Project Display Boards Please ensure you have JavaScript enabled in your browser. If you leave JavaScript disabled, you will only access a portion of the content we are providing. <a href="/science-fair-projects/javascript_help.php">Here's how.</a> Key Info For almost every science fair project, you need to prepare a display board to communicate your work to others.