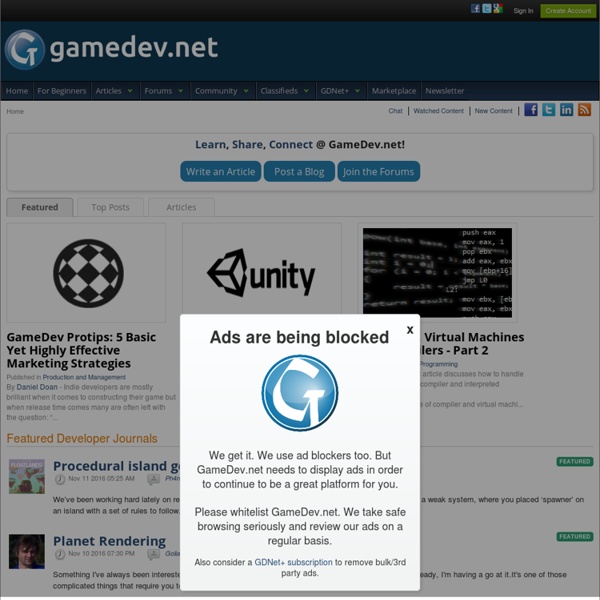 s free 3DS Models - for 3D-Studio Max, Maya, Lightwave, Softimage, Cinema4D etc. for 3D-Studio Max, Maya, Lightwave, Softimage, Cinema4D, Poser and all other programs which can import 3DS. You find 3D-Model Linklists at: Klickers kostenlose und lizenzfreie Bilder bei Pixelio free high resolution photos, textures, backgrounds and more Water Cooler Games Note: the Water Cooler Games archive is currently offline, but it will return shortly after being transitioned to this website. -ib, July 2014 From 2003-2009, Water Cooler Games served as the web’s primary forum for “videogames with an agenda” — coverage of the uses of video games in advertising, politics, education, and other everyday activities, outside the sphere of entertainment. The site was maintained at watercoolergames.org, where it was edited by myself and Gonzalo Frasca from 2003-2006, and by me alone from 2006-2009.

Touch To Start Making Money With HTML5 – Update & Preview This is a quick post to announce that I’ve updated my book, Making Money With HTML5. The revision (version 1.5) introduces an overhauled design, some updated content and statistics, and new images.The upcoming major revision (version 2.0) won’t be ready until May 2014 at the earliest, so I’ve decided to publish this minor update in the meantime. Continue reading for more details. Continue Reading Read More » Online Income Report #022 – February 2014 Each month I publish a fully transparent income report which documents my online earnings. A Video Game Development Blog November 17th, 2008 Posted in Reviews, Featured | No Comments » A Digital Dreamer takes a close look at this gem of a PS3 game that every designer should take the time to play. We had heard a lot of great things about LittleBigPlanet for the Playstation 3 months before it was released. We heard things like the way the characters were designed and showed emotions brought instant smiles on the faces of pretty much anyone who had a chance to play it. We had heard about great looking levels, multiplayer interaction, and creation aspects of the game.

Amit’s Game Programming Information What’s on this page? I’m interested in producing complexity out of simple parts. This page contains bookmarks that I collected while working on games; I did not write most of the content linked from here. As a result the set of links here reflects the types of things I needed to know: only a few specific topics (not everything related to game programming), general ideas instead of platform-specific information (graphics, sound, compilers), and ideas and designs instead of source code (I find it easier to go from an idea to code than from code to an idea).

Ten Tips for Becoming an Indie Game Developer Posted by Rampant Coyote on January 12, 2012 Post-Mortems on indie games always seem more interesting to me than post-mortems on big-studio games. It may be because they are just less conventional overall, or that the post-mortems I read of mainstream games usually conform to the Game Developer Magazine “5 things that went right / 5 things that went wrong” formula. I dunno.

So You Want to Be a Game Programmer? I often get email from people looking to get their first job in the game industry asking me for advice. What are companies looking for in candidates for entry-level programming positions? How come it’s so difficult to land a job? I can’t answer for the industry as a whole, but I can certainly tell you what I am looking for when trying to fill an entry-level programmer position.

Pixar Renderman RenderMan 20 Now Available! Highlights of version 20 include a game-changing noise reduction technology that accelerate render times from 2x to 10x. RenderMan 20 also expands the creative choices available to artists and studios through numerous advances in usability including a physical camera, a Visualizer for navigating and inspecting large scenes interactively, expanded shader libraries and presets, and new volume rendering features. Read all about RenderMan 20 ▶ DarkBasic Code Corner Last 10 additions Gamespace (AGK) - Example of how to submit and retrieve scores using the online GameSpace system.Memblock drawing functions (DBP) - A set of anti-aliased drawing routines that write directly to an image memblock. This is useful for creating custom graphics while preserving background transparency.

Ludum Dare Ludum Dare 29 Theme Slaughter!! April 10th, 2014 1:16 pm With over 3000 themes suggested by the community, how do we make that more manageable? Opinion: Indie Game Design Do-s and Don't-s: A Manifesto [Veteran indie game creator Edmund McMillen, known for his work on 2005 IGF Grand Prize winner Gish, Time Fcuk, and Super Meat Boy for WiiWare, shares his opinions and manifesto on making indie games, with 24 clear do-s and don't-s to make your art thrive.] One of the most common questions I'm asked in interviews is, "Do you have any advice for independent game developers who are new to the scene, or tips for developers in general?" Well, I actually answered it this time: I came up with this list of indie do-s and don't-s. Now, I'm going to make clear that I'm not perfect and I'm sure as the years go by this list will change. But from where I stand right now, having made independent art/games for a living for the past 10 years, the advice below is crucial to all indie game designers, and all artists for that matter.