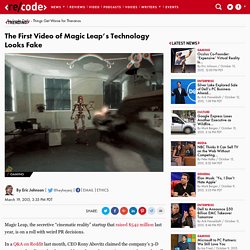 In a Q&A on Reddit last month, CEO Rony Abovitz claimed the company’s 3-D augmented reality technology could one day replace not just smartphones, but all screens in our lives. But then, shortly before a hotly anticipated appearance at the TED conference in Vancouver, Abovitz canceled his talk for unknown reasons. Today, the company released an odd video of a video game supposedly running on its hardware, but with the name of special effects studio Weta Workshop prominently attached. Mixed Reality Lab. Copyright The software on this page is released under the GNU / GENERAL PUBLIC LICENSE. 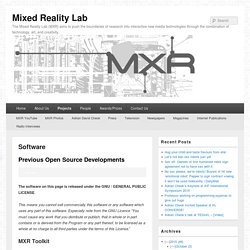 This means you cannot sell commercially this software or any software which uses any part of this software. Especially note from the GNU Licence “You must cause any work that you distribute or publish, that in whole or in part contains or is derived from the Program or any part thereof, to be licensed as a whole at no charge to all third parties under the terms of this License.”

A History of Virtual Reality - Timeline. Multimedia – From Wagner to Virtual Reality. In the 1950's it occurred to cinematographer Morton Heilig that all the sensory splendor of life could be simulated with "reality machines. 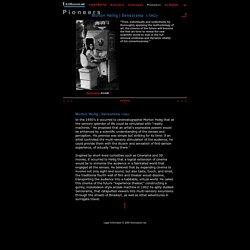 " He proposed that an artist's expressive powers would be enhanced by a scientific understanding of the senses and perception. His premise was simple but striking for its time: if an artist controlled the multi-sensory stimulation of the audience, he could provide them with the illusion and sensation of first-person experience, of actually "being there. " Inspired by short-lived curiosities such as Cinerama and 3D movies, it occurred to Heilig that a logical extension of cinema would be to immerse the audience in a fabricated world that engaged all the senses. He believed that by expanding cinema to involve not only sight and sound, but also taste, touch, and smell, the traditional fourth wall of film and theater would dissolve, transporting the audience into a habitable, virtual world. Michael Naimark - Selected Writings.

The Lost Library of MOO. Response to Jaron Lanier’s Digital Maoism. By Juliana Brunello Jaron Lanier is a computer scientist, composer, visual artist, and an author. 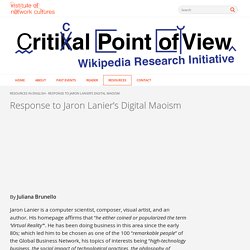 His homepage affirms that “he either coined or popularized the term ‘Virtual Reality’“. Jaron Lanier's Homepage. 7 Companies Discuss the Future of AR/VR Glasses. Virtual and augmented reality will do more than just boggle the imagination; they will finally set it free. 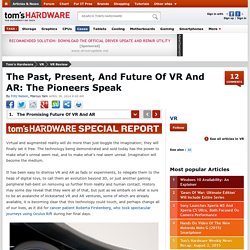 The technology being demonstrated and sold today has the power to make what's unreal seem real, and to make what's real seem unreal. Imagination will become the medium. It has been easy to dismiss VR and AR as fads or experiments, to relegate them to the heap of digital toys, to call them an evolution beyond 3D, or just another gaming peripheral hell-bent on removing us further from reality and human contact. History may some day reveal that they were all of that, but just as we embark on what is sure to be an avalanche of kickstarted VR and AR ventures, some of which are already available, it is becoming clear that this technology could touch, and perhaps change all of our lives, as it did for cancer patient Roberta Firstenberg, who took spectacular journeys using Oculus Rift during her final days. 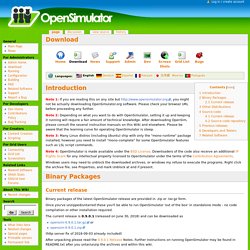 Please check your browser URL before proceeding any further. Note 2: Depending on what you want to do with OpenSimulator, setting it up and keeping it running will require a fair amount of technical knowledge. After downloading OpenSim, please consult the several instruction manuals on this Wiki and elsewhere. Please be aware that the learning curve for operating OpenSimulator is steep. Note 3: Many Linux distros (including Ubuntu) ship with only the "mono-runtime" package installed, however you need to install "mono-complete" for some OpenSimulator features such as LSL script commands. Note 4: OpenSimulator is made available under the BSD License. Windows users may need to unblock the downloaded archives, or windows my refuse to execute the programs.

Current release Binary packages of the latest OpenSimulator release are provided in .zip or .tar.gz form. Territories. > Liquid Architectures And The Loss of Inscription by Marcos Novak marcos@bongo.cc.utexas.edu. 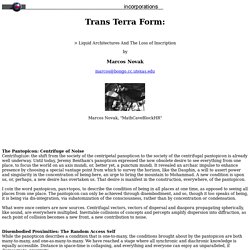 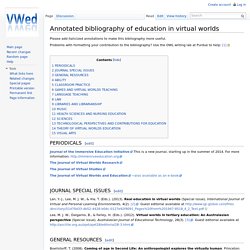 Problems with formatting your contribution to the bibliography? Use the OWL writing lab at Purdue to help: [1] PERIODICALS[edit] Journal of the Immersive Education Initiative This is a new journal, starting up in the summer of 2014. For more information: The Journal of Virtual Worlds Research. Virtual Worlds Education Wiki.