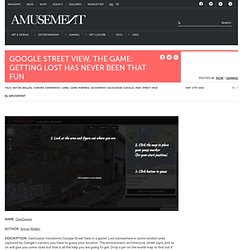 Lost somewhere in some random area captured by Google’s camera, you have to guess your location. Loading-citation.pdf. Digital Dualism and the Fallacy of Web Objectivity. Digital culture, identity and Play; a World of Warcraft Reader. Introduction: ‘‘Orc Professor LFG,’’ or Researchingin Azeroth Hilde G. 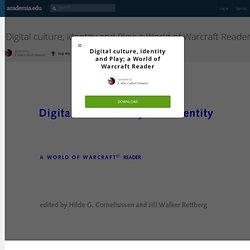 Our Space: Being a Responsible Citizen of the Digital World. Meggs_0911.pdf. Sociologists invade World of Warcraft, see humanity’s future. In their continued quest to plumb the mysterious depths of human interactions, some sociologists have stopped watching people—and started watching their avatars. 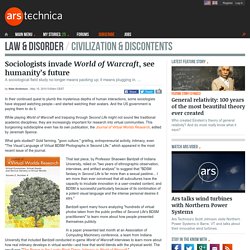 And the US government is paying them to do it. While playing World of Warcraft and traipsing through Second Life might not sound like traditional academic disciplines, they are increasingly important for research into virtual communities. The Digital World Is the Real World. Ike Nassi is something of a renaissance man in IT, having held senior technical positions at SAP AG, Cisco Systems Inc., Apple Computer Inc., Digital Equipment Corp. and several other companies. 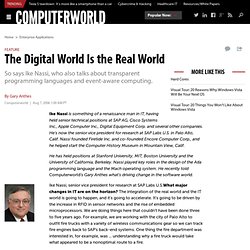 He's now the senior vice president for research at SAP Labs U.S. in Palo Alto, Calif. Nassi founded Firetide Inc. and co-founded Encore Computer Corp., and he helped start the Computer History Museum in Mountain View, Calif. He has held positions at Stanford University, MIT, Boston University and the University of California, Berkeley. Nassi played key roles in the design of the Ada programming language and the Mach operating system. He recently told Computerworld's Gary Anthes what's driving change in the software world. Call of Duty as Historical Reenactment. When I was 8, I was enrolled into a summer camp at Genesee Country Village and Museum. 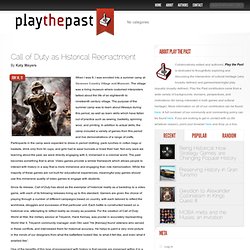 The village was a living museum where costumed interpreters talked about the life of an eighteenth to nineteenth century village. The purpose of the summer camp was to learn about lifeways during this period, as well as learn skills which have fallen out of practice such as sewing, basketry, spinning wool, and printing. The Real World vs. the Digital World. Way to state the obvious, huh? 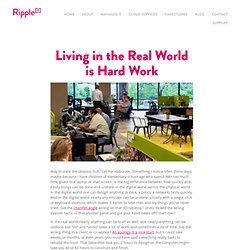 Let me elaborate. Something I notice often these days, maybe because I have children of elementary school age who spend WAY too much time glued to a laptop or iPad screen, is the big difference between how quickly and easily things can be done and undone in the digital world versus the physical world. In the digital world one can design anything (a desk, a policy, a network) fairly quickly.

And in the digital world nearly any mistake can be undone, usually with a single click or keyboard shortcut, which makes it easier to take risks and try things you’ve never tried. Got the chamfer angle wrong on that 3D tabletop? Age of New Media Empires: A Critical Interpretation of the Korean Online Game Industry. Investigate major market players. 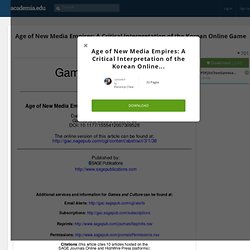 Finally,we draw on ethnographic data to link sociocultural elements contributing to the diffusion of online games in the culturalmilieu specific to Korean youth. Our objective is to provide as complete a picture aspossible for arriving at a nuanced explanation of the current state of Korean onlinegames,stakeholders,and players alike. A Discourse of Political Economy and Ethnography asMethodological Framework. As Far As The Eye Can See: How Skyrim Distorts Spatial Relationships. As a big fan of Bethesda’s open world RPGs, I’ve been utterly absorbed in Skyrim for the past week or so. 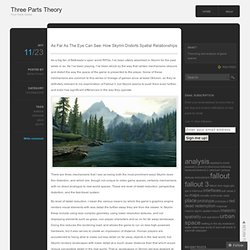 As I’ve been playing, I’ve been struck by the way that certain mechanisms obscure and distort the way the space of the game is presented to the player. Some of these mechanisms are common to this series or lineage of games since at least Oblivion, so they’re definitely relevant to my examination of Fallout 3, but Skyrim seems to push them even further, and even has significant differences in the way they operate. There are three mechanisms that I see as being both the most prominent ways Skyrim does this distortion, and which are, though not unique to video game spaces, certainly mechanisms with no direct analogue to real-world spaces. These are level of detail reduction, perspective distortion, and the fast-travel system. Disability Rights and Access to the Digital World. Daniel Goldstein and Gregory Care The typical federal disability rights case involves a disabled worker in a dispute over reasonable accommodations or a disabled patron claiming that there is a physical barrier to access to a public accommodation or government facility. 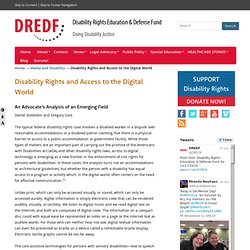 While those types of matters are an important part of carrying out the promise of the Americans with Disabilities Act (ADA) and other disability rights laws, access to digital technology is emerging as a new frontier in the enforcement of civil rights for persons with disabilities. In these cases, the analysis turns not on accommodations or architectural guidelines, but whether the person with a disability has equal access to a program or activity which, in the digital world, often centers on the need for effective communication.[1] It was after most of those adaptive technologies were developed that we witnessed an explosion of digital devices, software, and content in government, business, education, and social life.

Nine Inch Nails Using Alternate Reality Game (ARG or “Big Game”) To Market New Album. I think the concept of marketing using “big games” or ARG’s is one of the most exciting marketing concepts that has emerged in recent years. 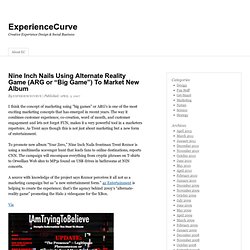 The way it combines customer experience, co-creation, word of mouth, and customer engagement and lets not forget FUN, makes it a very powerful tool in a marketers repertoire. As Trent says though this is not just about marketing but a new form of entertainment. To promote new album “Year Zero,” Nine Inch Nails frontman Trent Reznor is using a multimedia scavenger hunt that leads fans to online destinations, reports CNN. The campaign will encompass everything from cryptic phrases on T-shirts to Orwellian Web sites to MP3s found on USB drives in bathrooms at NIN concerts. Via iamtryingtobelieve.com Related: Five Trends Driving Big Games. ARGNet: Alternate Reality Gaming Network.

The 5 Most Insane Alternate Reality Games. The game took off with a bang when, during the 2007 San Diego Comic-Con, people found "Jokerized" $1 bills that led them to whysoserious.com, a page advertising jobs for Joker henchmen. Those eager to be repeatedly punched by costumed vigilantes and/or murdered by their own boss were instructed to be at a certain spot near the convention center at 10:00 a.m. the next day. Upon going there at the allotted time, players discovered a phone number ... written in the sky. "Don't call that, dude -- it's probably Goatse. " Calling the number prompted a recording of a whimpering man being forced to read instructions for what came next: a scavenger hunt. The fans at Comic-Con were then painted with Joker makeup and sent off to find clues throughout San Diego, having to cooperate with those online in order to solve additional puzzles at the website. Via Batman.wikibruce.com. Ethnography of Online Role-Playing Games: The Role of Virtual and Real Contest in the Construction of the Field.

Volume 8, No. 3, Art. 36 – September 2007 Ethnography of Online Role-Playing Games: The Role of Virtual and Real Contest in the Construction of the Field Simona Isabella.