Uniting the way to the new world 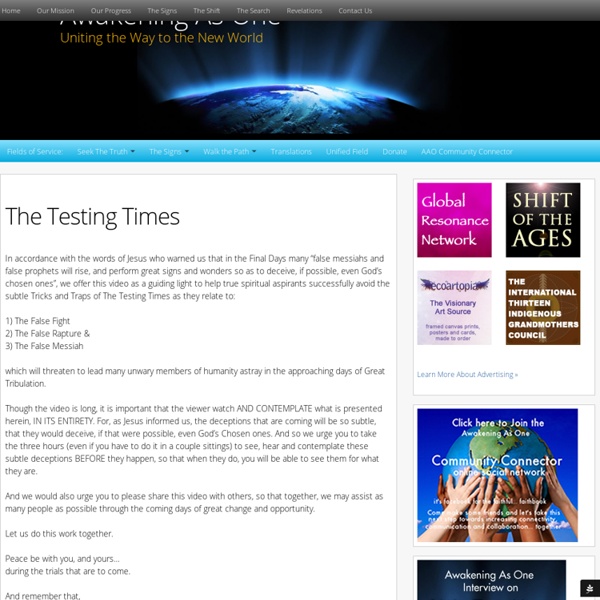 Seeking Higher Consciousness We can learn so much from nature. So much so, that if we modeled all of our technology off of the basic principles of how nature operates, we would be in very good hands. Using the law of conservation of energy, we would make sure that all power was used to the most efficient and effective means possible. For example, modelling our Solar Panels off of Photosynthesis, free energy becomes as commonplace as cars on roads… or sliced bread! These are actual planes in the air all at the same time! In this video, Louie Schwartzberg describes a movie that he has been working on for a while, which brings a level of awareness to “That which is Unseen”. The most exciting part to me was the Dragonflies. Imagine if you had your own little Dragonfly jet they could fly around anywhere you wanted? There’s only one word I can use to describe it… Badass! Okay, this is just plain amazing! They say it works, and they’re convinced! Einstein was an absolutely brilliant man. What am I still rambling about?

Holding a Program in One's Head August 2007 A good programmer working intensively on his own code can hold it in his mind the way a mathematician holds a problem he's working on. Mathematicians don't answer questions by working them out on paper the way schoolchildren are taught to. That's particularly valuable at the start of a project, because initially the most important thing is to be able to change what you're doing. Your code is your understanding of the problem you're exploring. It's not easy to get a program into your head. Even the best programmers don't always have the whole program they're working on loaded into their heads. Avoid distractions. Even more striking are the number of officially sanctioned projects that manage to do all eight things wrong. It's not merely true that organizations dislike the idea of depending on individual genius, it's a tautology. Maybe we could define a new kind of organization that combined the efforts of individuals without requiring them to be interchangeable.

Some Theosophical Ideas Modern Theosophy postulates that the field of existence embraces more than this material and passing reality we perceive through our senses. In fact, the lack of knowledge about the higher aspects of reality makes us see things from a wrong perspective, which is the root cause of suffering. We can gain knowledge of the Real, both in the universe and in human beings, by means of a holistic spiritual practice that includes study, meditation, and service. Below are some of the basic ideas the Theosophical literature offers for consideration. However, the Theosophical Society does not ask its members to adhere to any of these ideas in particular. Members are only expected to be in agreement with the Three Objects of our organization. Behind everything seen or unseen there is an eternal, boundless, and immutable absolute Reality, which is beyond the range of human thought. Continue exploring... 1- Articles Theosophy and Orthodoxy by Pedro Oliveira Some Fundamentals of Theosophy by Emily Sellon

Family tree of the Greek gods Key: The essential Olympians' names are given in bold font. See also List of Greek mythological figures Notes External links Media related to Family trees of Greek mythology at Wikimedia Commons Erowid elephant journal: Yoga, Sustainability, Politics, Spirituality. Jordan Maxwell | Esoteric Scholar Avia Venefica: Behind the Signs at Whats-Your-Sign.com Avia Venefica contends the universe and all its contents is a sacred energy that uses organic symbolism as a platform for expression. She actively pursues deeper meaning in life events (individually and collectively) and employs an archetypal, gestalt use of symbolic interpretation to gain insight into these life events. This pursuit has lead her to study literature (i.e.: Jung, Campbell) and philosophies of varying cultures (i.e.: Native American, Celtic) with a goal to understand symbolic meanings using naturalistic (pre-industrial) perspectives. "The Divine is always communicating with us. Avia proposes, that by learning various cultural and archetypal meanings of symbols, we can utilize those meanings for guidance in solving real-life problems. Avia has an undergraduate degree in anthropology and has been an understudy in several tribal and spiritual organizations. A Message From Avia Hi Everybody! My writings here and on my blog are a result of all that poking around. UPDATE!

Project Avalon "That Perfect High" -- R.I.P. Shel Silverstein From Dr. Legume Since Brother Shel Silverstein died this week, it got me looking through my archives, where I dredged up this little gem I thought I'd share with you all, a poem that bears a message VERY close to our hearts. ---------------- The Perfect High There once was a boy named Gimme-Some-Roy... As a kid, he sat in the cellar...sniffing airplane glue. But grass just made him wanna lay back and eat chocolate-chip pizza all night, and the great things he wrote when he was stoned looked like shit in the morning light. He tried PCP, he tried THC, but they never quite did the trick. Now, Baba Fats was a hermit cat...lived high up in Nepal, High on a craggy mountain top, up a sheer and icy wall. So out and off goes Gimme-Some-Roy, to the land that knows no time, Up a trail no man could conquer, to a cliff no man could climb. Grinding his teeth, coughing blood, aching and shaking and weak, Starving and sore, bleeding and tore, he reaches the mountain peak. "What's happenin', Fats?"