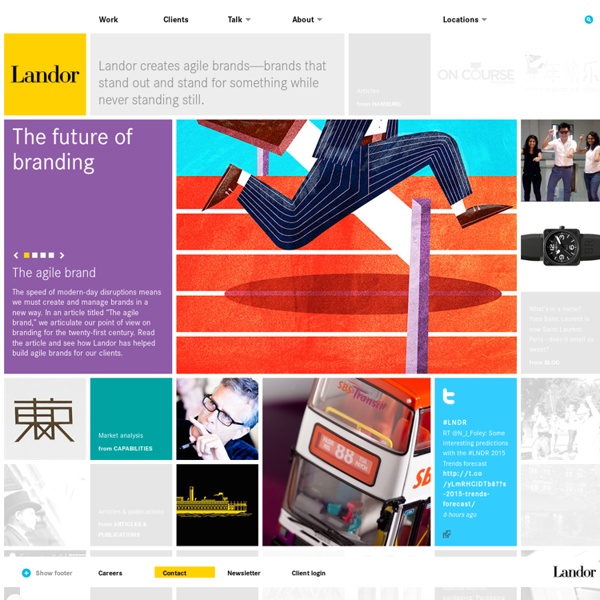 Analytics Drives Next Generation Of Moneyball In Sports - Software - Business Intelligence Professional sports teams now use deep analytics to drive decisions about nearly every aspect of the game. A recent conference drew practitioners -- and job seekers in this new career path. What do professional baseball, basketball, football, hockey, motorsports, soccer, and tennis all have in common? They're all sports in which analytics are increasingly used to drive decisions in nearly every aspect of the business, from ticket and merchandise sales to labor agreements to player contracts, to TV and digital media deals. In baseball, as in other sports, the depth and breadth of performance measures now applied to the game make early pioneers like Oakland Athletics GM Billy Beane--recently portrayed by Brad Pitt in the movie Moneyball--look like dabbling amateurs.

The recession and the Web design industry Apr 15 2010 By Andy Warpole In the autumn of 2008, at least for a few weeks, it looked as if the very walls of capitalism were going to fall on to the heads of its participants. The once mighty Lehman Brothers, an American corporate monolith since the 19th century, imploded overnight on September 15 and declared itself bankrupt; and then in the following month $10 trillion in market capitalisation was lost from global markets. There was panic on Wall Street, in the City of London, Berlin, Paris and most major financial centres as stocks crashed and the politicians spent billions of taxpayers money to prop up the banks.

Global Brand Valuations - Intangible Assets, Analytics, Strategy & Transactions About us Brand Finance Plc is the world’s leading brand valuation consultancy. We advise strongly branded organisations on how to maximise their value through the effective management of their brands and intangible assets. Founded in 1996, Brand Finance has performed thousands of branded business, brand and intangible asset valuations worth trillions of dollars.

Why ‘how’ is as important as ‘what’ « LOVE+MONEY thanks to net_efekt/flickr As part of the google firestarters event, brilliantly hosted by Neil Perkin, I debated the failure of research companies in helping clients and agencies with the ‘how’: the act of making and perfecting ideas in market, with communities and within organisations. Since that event Cog and Face Group have discussed their services, as well as Brainjuicer. This is great. Well done those pioneering companies.

TNS studies car buying in China CHINA— TNS has completed a major multi-client study of car buying in China, which tracked 1,200 people over four months. The Automotive Path to Purchase Study (Tapps) was backed by a Chinese car maker and two European manufacturers. TNS recruited people who said they intended to buy a car in the next six months, and asked them to keep an online diary of their activities. Participants also agreed to have their web usage tracked using a plugin installed on their computers and took part in ad hoc online discussion groups. The agency claims Tapps is the first study to track behaviour during the car-buying process on this scale. TNS’s global development director Andy Turton (pictured) said the online methodology “works just fine” in China for new car buyers and gets around some of the limitations of how research into car buying has been done in the past.

Iceland Volcano erupts causing floods and air traffic delays Video of Iceland volcano Eyjafjallajokull erupting causing floods and ash as far as 5KM in the air. Iceland volcano eruption that cause major flooding and air traffic delays - Image BY: Ingolfur Juliusson/Reuters virtually all airports in Denmark, Norway, and North Sweden were all closed, while flights as far as London, 1000 miles away from the eruption were halted. The BAA Britain’s airport operator wrote on their official page “Major disruption expected – Following advice from the Met Office, the national air traffic service (NATS) has introduced restrictions to UK airspace this morning as a result of volcanic ash drifting across the UK from Iceland.”

About Us Monitor helps organizations grow. We work with leading corporations, governments and social sector organizations around the world on the growth issues that are most important to them. Growth is a complicated problem. It involves identifying new opportunities through creativity and insight; it also involves the hard work of removing the barriers to growth that build up over time in any organization. #Firestarters 2: Design Thinking In Planning - The Event Might Design Thinking, instrumental in bringing human-centred design principles to innovation processes, change the practice of planning? Is it relevant? These were the questions tackled in the latest Firestarters event - part of the series I'm curating for Google to facilitate different thinking and debate around some of the more interesting and challenging issues facing the practice of planning. So Wednesday evening saw some of the great and the good in UK planning gather at Google HQ to engage in some open space debate stimulated by a couple of truly thought provoking talks by Tom Hulme, Design Director at IDEO, and John Willshire, Chief Innovation Officer at PHD.