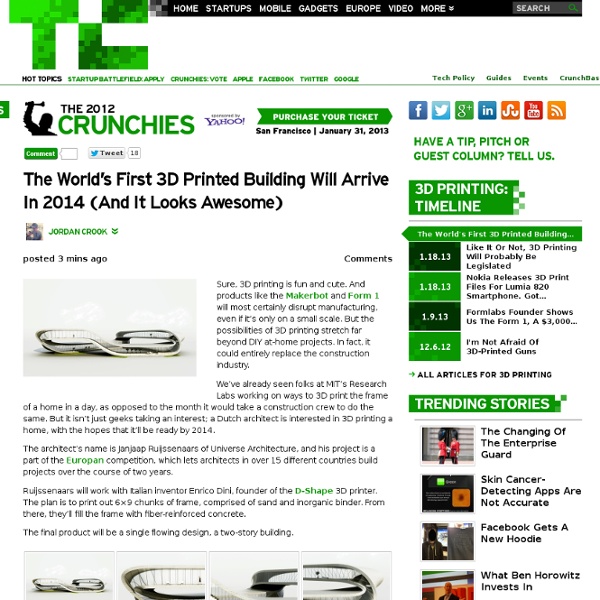 Sure, 3D printing is fun and cute. And products like the Makerbot and Form 1 will most certainly disrupt manufacturing, even if it’s only on a small scale. But the possibilities of 3D printing stretch far beyond DIY at-home projects. In fact, it could entirely replace the construction industry. We’ve already seen folks at MIT’s Research Labs working on ways to 3D print the frame of a home in a day, as opposed to the month it would take a construction crew to do the same. The architect’s name is Janjaap Ruijssenaars of Universe Architecture, and his project is a part of the Europan competition, which lets architects in over 15 different countries build projects over the course of two years. Ruijssenaars will work with Italian inventor Enrico Dini, founder of the D-Shape 3D printer. The final product will be a single flowing design, a two-story building. Here’s the project in Ruijssenaars’ words: One surface folded in an endless möbius band. [via 3ders.org] Related:  markliberman

Like It Or Not, 3D Printing Will Probably Be Legislated As the race – and it’s basically a race – to release as many 3D-printed gun parts as possible heats up, it’s never been harder for me to come down on the side of the “Freedom To Tinker” crowd. Last weekend Defense Distributed, a group dedicated to releasing plans for a 3D printed gun, posted a video and description of their 3D-printed AR-15 thirty-round magazine. The video, which is, unnecessarily, full of snarky vitriol, shows that, on some level, the 3D printed gun isn’t very far off. The problem with childish displays of firepower coupled with “How’s that national conversation going?” Rep. The law would “make it illegal to manufacture, own, transport, buy, or sell any firearm or magazine that is homemade and not detectable by metal detector and/or does not present an accurate image when put through an x-ray machine.” Politics, as we’ve learned, is woefully unprepared to handle major technological advancement.

TVPDesign Teams TVPDesign Teams are for Scientific & Technical Professionals who wish to get involved in design-related TVP projects to aid the implementation of The Venus Project as directed by Jacque Fresco. Those working within these teams do so as volunteers for The Venus Project. All designs by Jacque Fresco are protected by copyright, therefore volunteers are required to sign a non disclosure agreement (NDA). If you would like to find out more about our TVPSupport Teams which are international groups aimed at promoting the The Venus Project in their local communities and creating supportive media [ Click here ] If you would like to find out more about our TVPCore Teams which are focused groups aimed at assisting the implementation of the The Venus Projects aims and proposals [ Click here ] (Coming Soon) To develop plans, sections and elevations of the various designs of The Venus Project as well as further develop city plans etc. Please send your CV / Resume (Coming Soon) RBE Simulations (Coming Soon)

WikiWep DevBlog. DOJ began a PR push last week to find legislative traction for a set of proposed bills that would criminalize the individual production of rifle receivers and magazines with 3D printers. Sections 4 and 5 of the proposed House bill directly criminalize 3D printed receivers and magazines, and mandate an arbitrary amount of metal be part of their fabrication. Beyond suffering from fatal Due Process and GCA problems, the bill’s prohibitions are not extended to manufacturers because (hint) there isn’t actually a security issue at stake. The bad faith and fraud required to hide this from the current public discussion is of course par for the course. The media organs have dutifully repeated the official account. The NRA used to say “no inroads.” Ceterum censeo

Cloud computing Cloud computing metaphor: For a user, the network elements representing the provider-rendered services are invisible, as if obscured by a cloud. Cloud computing is a computing term or metaphor that evolved in the late 1990s, based on utility and consumption of computer resources. Cloud computing involves application systems which are executed within the cloud and operated through internet enabled devices. Purely cloud computing does not rely on the use of cloud storage as it will be removed upon users download action. Clouds can be classified as public, private and hybrid.[1][2] Overview[edit] Cloud computing[3] relies on sharing of resources to achieve coherence and economies of scale, similar to a utility (like the electricity grid) over a network.[2] At the foundation of cloud computing is the broader concept of converged infrastructure and shared services. Cloud computing, or in simpler shorthand just "the cloud", also focuses on maximizing the effectiveness of the shared resources.

Fab Cafe in Tokyo Preps Sweet 3D Printing Workshop in Time for Valentine's Day We’ve had a few fun 3D printing stories over the past few weeks. You may recall this 3D printing photo studio from Xi’an, China which prints a miniature bust of the customer in just a few hours after the initial photo is snapped. But just across the water in Japan, the folks at Fab Cafe Tokyo are cooking up some 3D printing goodness that is just a little bit sweeter, and just in time for Valentine’s day. In early February, Fab Cafe will hold a workshop for women where they can make 3D chocolates modeled from their own face using a 3D printer and scanner. The workshop will be held on consecutive Saturdays, February 2nd and 9th, and participants will be able to learn about 3D modeling. You’ll also have a chance to create a mould, from which you can later make your own chocolate replicas. This particular event is targeting women, since the Valentine’s Day custom in Japan is for women to give chocolate to men. (Via Chiho Komoriya on Japanese VW)

Printable Houses and the Massive Wave of Opportunity it will bring to Our Future All the way back in March of 2004, working in his laboratory at the University of Southern California in San Diego, Dr. Behrokh Khoshnevis, was working with a new process he had invented called Contour Crafting to construct the world’s first 3D printed wall. His goal was to use the technology for rapid home construction as a way to rebuild after natural disasters, like the devastating earthquakes that had recently occurred in his home country of Iran. While we have still not seen our first “printed home” just yet, they will be coming very soon. For an industry firmly entrenched in working with nails and screws, the prospects of replacing saws and hammers with giant printing machines seems frightening. Here’s why I think this will happen. Contour Crafting Contour Crafting is a form of 3D printing that uses robotic arms and nozzles to squeeze out layers of concrete or other materials, moving back and forth over a set path in order to fabricate a large component. Breaking Through the Barriers

A French Artist Is Posting DIY Robot Parts So We Can Print Our Own Androids Gael Langevin wants to give you a robot. The French artist is posting 3D printer files for a humanoid robot he’s building as he completes the various parts, allowing us all to create our very own plastic helper/lover with some ABS plastic, a few Arduino boards, and some motors. The plans for the hands are available on Thingiverse and Langevin will release more parts over the next few months. While the robots do look a bit unsettling – like Sonny from I, Robot with bad skin – it’s definitely a compelling project that could really change the way we think about 3D printing at home.

onepeopleoneworld Singapore's Pirate3DP Gets Seed Funding for its Disruptive 3D Printers 3D printing promises a world of amazing possibilities, bringing small-scale manufacturing onto your desktop. But hardware costs are holding back its adoption. Singapore-based startup Pirate3D is aiming to combat that, and is “developing the most affordable and user-friendly 3D printer for the mass-consumer market.” Today, Pirate3D announced that it has attracted S$589,000 (US$482,000) in seed investment from Red Dot Ventures, which is one of the Singapore government-supported incubators. Pirate3D hasn’t even launched yet, and the countdown on its homepage indicates that the startup is 72 days away from revealing its own 3D printer, dubbed the Buccaneer, which is currently in the prototyping phase. (See: This Chinese Startup Wants to Bring You a 3D-Printed, Smartphone-Controlled Drone [VIDEO]) The Pirate3D founders are childhood buddies Roger Chang, Brendan Goh, and Tsang You Jun (pictured), along with experienced entrepreneur Neo Kok Beng of the National University of Singapore.