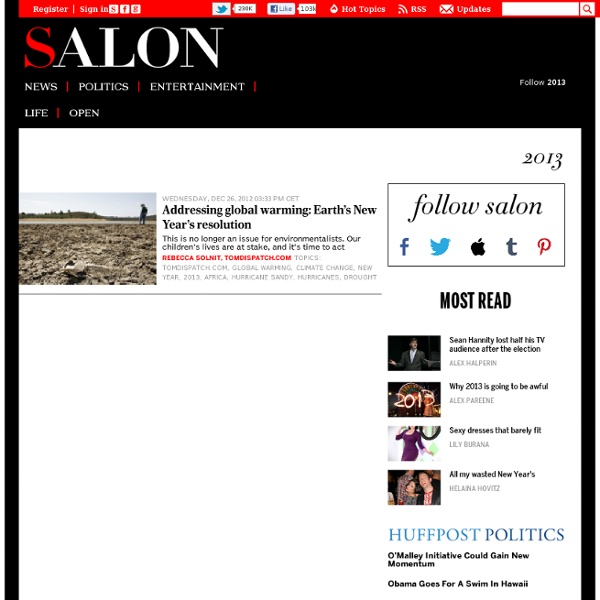 Related:  Literature Reviews • Various Show Clips • Bugs • Us and Guns • US of A and those Wascally Terrorists

Why isn’t there a Neil deGrasse Tyson for the humanities? We blame Camille Paglia By Michael BérubéMonday, April 7, 2014 8:00 EDT Last week, Adam Weinstein asked on Gawker: Where Is the Humanities’ Neil deGrasse Tyson? Coming on the heels of Nick Kristof’s badly-framed and much-derided call for professors to speak more broadly and openly to nonacademic audiences (as if we don’t already do that, every chance we get), Weinstein’s question was easy to misframe and deride. Also, it was on Gawker, so it was all the more tempting for academics to dismiss, as if it were a “which obscure humanist are you?” quiz on Buzzfeed. But it’s a very good question, and Weinstein asked it as someone who believes in the humanities.

Jimmy Fallon Olive Garden Parody Is Spot-On Olive Garden announced last year that it was getting rid of its famous slogan, "When you're here, you're family." But the slogan isn't just going into the tagline graveyard -- it has found a new home. Last night, Dave George, the president of Olive Garden, "officially" signed away the slogan to Late Night With Jimmy Fallon. It was an Olive Garden-Fallon love fest, in which all the audience members got free t-shirts with the new slogan and $100 gift cards to the restaurant. The best part of the segment occurs in the last minute, though, when Fallon and The Roots premiere a spot-on Olive Garden parody ad.

This Spider Makes Fake Spiders. But Why? TAMBOPATA, Peru – Scientists returned to the Amazon rainforest in December to collect data on one of their biggest finds of 2012: a spider that uses insect corpses and jungle trash to build big, spider-shaped decoys in its web. But these Peruvian spiders, presumed to be a new species of Cyclosa, are not the sole sculptors of false arachnids. A second decoy spider lives in the Philippines, on the island of Negros. Finding two spiders that make such similar designs, 11,000 miles apart, has left scientists wondering how the behavior evolved and if the decoys serve as lures for prey or as an anti-predator defense system.

Where the Torture Never Stops by JEFFREY ST. CLAIR It was shortly after five o’clock on a Saturday morning last April. The prisoners in the communal cellblock at Camp 6 in Guantanamo Bay Prison had just gathered for morning prayers. Suddenly the overhead lights went out, the cell doors slammed shut and tear gas canisters exploded in the room. Walter Scott was no bland tartan romantic, he was dumbed down This week sees the 200-year anniversary of the publication of Walter Scott’s first novel Waverley. Journalist Stuart Kelly has called Scott “the man who invented a nation” but what is Scott’s relevance for today? What kind of version of Scotland and of history more generally has he given us? Scott has suffered from bad press. Often seen as the man who gave the world a tartan and shortbread image of Scotland, some accuse him of creating a version of the country that is no more than a museum piece, valuable for the tourist industry, but of little relevance for the re-negotiation of a modern Scottish identity.

Lewis Black To Joy Behar: 'Democrats Are Like A Big Tortoise That's On Its Back & Can't Get Up' Deval Patrick emboldened the Democratic base during his rousing Tuesday-night convention speech by proclaiming that it was time for the party to "grow a backbone." Judging by Lewis Black's comments on tonight's upcoming "Joy Behar: Say Anything!" on Current TV, he agrees. In this exclusive clip from the interview, Black tears into the Dems for being all talk with little action, and the incessant summertime saber-rattling of both parties. "I've listened to this litany all my life, just do the stuff you gotta do...

Sea lice eating meat video after Vic teen attacked, Brighton Yahoo7 and Agencies WARNING, GRAPHIC CONTENT: A Melbourne father has shared a horrific video of hundreds of what are believed to be "sea lice" devouring chunks of raw meat after his teenage son was left bleeding from an ocean swim. Sam Kanizay, 16, went for a 30 minute dip at Dendy Street Beach in Brighton on Saturday evening and walked out with what his family said were tiny marine creatures eating his legs. His father, Jarrod Kanizay, said the creatures "ate through Sam's skin" and left him bleeding profusely.

Waitresses Carry Guns At Aptly Named Restaurant In Aptly Named Town RIFLE, Colo. (AP) — Many stores and restaurants are telling people not to bring their guns inside, but one western Colorado restaurant not only embraces the practice of packing heat, it encourages its customers to carry openly — and its waitresses do, too. As she takes your order at Shooters Grill in the town of Rifle — yes, Rifle — waitress Ashlee Saenz carries a pad, pen and a loaded Ruger .357 Blackhawk revolver holstered on her leg, Old West style.

CIA and Mandela: Can the Story Be Told Now? Back in 1990, FAIR (Extra!, 3/90) noted that the media coverage of Nelson Mandela's release from prison failed to mention there was strong evidence that the CIA had tipped off South African authorities to Mandela's location in 1962, resulting in his arrest. So with coverage of Mandela's death dominating the media now, can the story of the CIA's role in Mandela's capture be told? Mostly not. The link between the CIA and Mandela's capture--reported by CBS Evening News (8/5/86) and in a New York Times column by Andrew Cockburn (10/13/86)--was almost entirely unmentioned in media discussions of his death.

Philip Marlowe in The Big Sleep Characters Character Analysis The Tough Guy On the surface, Philip Marlowe appears to be your quintessential tough-guy private eye. He's tall, dark, and ruggedly handsome, Rick Castle-style. He's got a dry sense of humor and a quick wit. Jerry Seinfeld, Joel Hodgson Talk 'Mad Men,' Ketchup And Nostalgia On 'Comedians In Cars Getting Coffee' On the latest episode of "Comedians In Cars Getting Coffee," Jerry Seinfeld's longtime friendship with "Mystery Science Theater 3000" creator Joel Hodgson is revealed at a diner in New Jersey. The two comedians have made their mark in very different ways, but as you watch them casually drive to New Jersey in a VW Karmann Ghia, it becomes clear that they are cut from the same cloth. "I remember when you only had one car," is how Hodgson sums up how long he's known Seinfeld, and it shows. Seinfeld mentions their early friendship in the 80s when the two discuss how they were obsessed with "Mad Men" back then, before the show existed. All they wanted to do was be advertising guys in the 60s, mostly so they could have bars in their offices and drink at lunch (a shared dream of all men of a certain age, they suspect). Once they reach the diner, the conversation flows between the human compulsions to organize and be nostalgic to the newly designed ketchup bottles with the cap on the bottom.

Camel Spiders Are Fast, Furious and Horrifically Fascinating Imagine waking up to find a hairy-faced, fleet-footed monster on your doorstep—a creature that looks like a mashup of Shelob and Grendel, with jaws nearly one-third the size of its body. Jaws that have just sheared most of your nest-mates in half. This was the stuation for an unfortunate colony of ants that recently fell victim to a camel spider in Israel. Who gets shot in America: What I learned compiling records of carnage for the New York Times By Jennifer MasciaTuesday, July 15, 2014 7:00 EDT A year and a half ago, after the massacre at Sandy Hook Elementary School in Newtown, Conn., Joe Nocera, an Op-Ed columnist at the New York Times, asked me, an editorial assistant at the newspaper, to find out who gets shot in America every day. Joe has a young child, and he was haunted by the fact that it could easily have been his own son in that classroom. We realized that we didn’t know who the majority of gun violence victims were, the people whose deaths didn’t make it onto a CNN broadcast. Six weeks after Newtown, Joe wrote a column consisting of a few lines about shootings that had happened that week, presented without comment. He had a blog he wasn’t using, so starting the next day, I started writing at that blog by searching for America’s shooting victims.