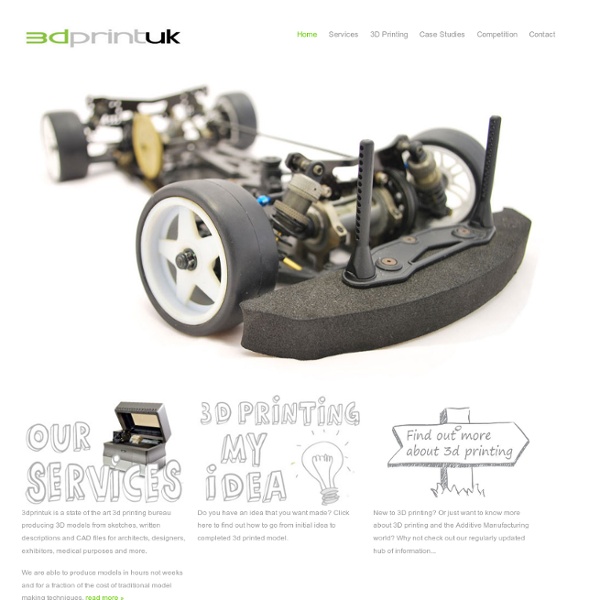 Hyrel 3D Printer Can Squirt Out Self-Setting Sugru And Even Play-Doh The Hyrel 3D printer looks like any other single-extruder additive printer. But thanks to a fairly unique nozzle called the HYREL Emulsifiable Extruder (EMO-25) you can use it to squirt out usual materials like Play-Doh, air-drying clay, and even Sugru, a self-setting rubber that dries into a solid, usable object. The creator, Daniel Hutchison funded his project on Kickstarter and is preparing to ship the printer in the next few months. The printer actually contains a full PC and raised $150,000 on Kickstarter. These materials are important because they can be smoothed down and, using products like Sugru, you could feasibly print rubber gaskets directly inside plastic objects using a dual-extruder system. The extruder is also good for schools and artists who may want to produce, say, stop-motion animations using clay or reusable models. The printers start at $1,995 and go up to $3,000.

Atelier 145 Mars-bound astronauts will print food & tools, NASA says NASA will transport 3D printers to space so astronauts can print tools — and potentially even food. NASA’s chief administrator Charles Bolden discussed the role of 3D printers during a recent press tour of the Ames Research Center. According to ComputerWorld, Bolden believes the technology could be “key,” particularly as the agency explores missions to Mars and beyond. “As NASA ventures further into space, whether redirecting an asteroid or sending humans to Mars, we’ll need transformative technology to reduce cargo weight and volume,” Bolden said. “In the future, perhaps astronauts will be able to print the tools or components they need while in space.” From VentureBeat Ready to think outside the (ad) box? A recent NASA blog post supports his theory; the author writes that “the agency will need to make improvements in life support systems,” and the “current food system wouldn’t meet the nutritional needs and five-year shelf life required for a mission to Mars.” Photo credit: Made in Space

ArtiVasc 3D 3-D printer going to space station in 2014 Made in Space Made in Space team members with their 3-D printer hang on during a Zero-G test flight. By Mike Wall, SPACE.com A 3-D printer is slated to arrive at the International Space Station next year, where it will crank out the first parts ever manufactured off planet Earth. The company Made in Space is partnering with NASA's Marshall Space Flight Center on the 3-D Printing in Zero G Experiment (or 3-D Print for short), which aims to jump-start an off-planet manufacturing capability that could aid humanity's push out into the solar system. "The 3-D Print experiment with NASA is a step towards the future. "The first printers will start by building test coupons, and will then build a broad range of parts, such as tools and science equipment," he added. The 3-D printer is slated to blast off in August 2014, tagging along with a cargo mission private spaceflight company SpaceX is launching to the orbiting lab for NASA. Related: Pizza printouts?

about us We created Nervous System to explore a design approach that relates process and form in a context of interactivity and openness. Our trajectory focuses on generative design methods using both algorithmic and physical tools to create innovative products and environments. Formally we are attracted to complex and unconventional geometries. To evolve such forms, we systematically engage in generative processes. Our studio exploits this possibility by releasing our work online as a series of interactive applets which customers can use to craft their own personalized products. Our products are designed to be affordably and ethically made.

In Tomorrow's Wars, Battles Will Be Fought With a 3-D Printer | Danger Room Army Staff Sgt. Joshua Rucinski checks his 3-D printer at Joint Base Balad, Iraq on June 8, 2011. Less than two years later, an increasing number of military officers are saying this could change the way we fight wars. Photo: U.S. Army A 3-D printed drone is shot down by insurgents near a far-flung base manned by the U.S. military. It’s a far-out vision for future combat, but at least one naval officer thinks it could happen. Aside from drones — which have already been printed — ammunition could potentially be produced with the machines, as the casings would be “relatively easy,” he writes. None of this amounts to the official position of the Pentagon, but publications like the Armed Forces Journal serve as influential arenas where many theories and ideas from military officers — some which are later incorporated — are first put up for debate. In April, Navy lieutenants Scott Cheney-Peters and Matthew Hipple sketched out a theoretical future Navy in the widely read U.S.

A 3-D Printer For Every Home! (Yeah, Right) There are a few Holy Grails on the Internet--things that thou shalt not touch because the Internet is still pretty much run by geeks. You can’t criticize the hilarity and hive mind intelligence of memes, even when they’re, you know, really stupid. You can’t discuss the potential reasoning behind DRM, even when, to be a little fair, the web is a fantasy land of copyright infringement. But maybe, more than any of these, thou shalt not question the obvious, inevitable future of 3-D printing. Because as we all know, one day, there will be a 3-D printer in every home, and when you need a new watch, pair of shoes or perfectly mapped sculpture of your inner ear canal, presto!, just print it! Well, I have bad news that will probably make a lot of intelligent people whom I respect very much shake their heads in disgust. 3-D printing is not “bigger than the Internet” or even as big as the Internet. 3-D printing is not the next home revolution. For One, We Just Don’t Need That Much Crap

Online marketplace '3D Burrito' for 3D printed objects - find3dprinter An online marketplace for 3D printed designs hits the web. It’s called 3D burrito and it’s a place where people can buy and sell 3D designs made for 3D printers. It feels a bit like Shapeways, only 3D Burrito is more open source and focused on printing at home with your own 3D printer. Shapeways is more oriented on the whole solution, they offer a 3D printed product and mail it to your adress. Before the two founders (from Sweden) started the website 3D Burrito they where looking online for a printable design of a 3D Burrito. Screenshot 3D printing marketplace ’3D Burrito’ I think in the near future these marketplaces for 3D printable objects will takeover normal webshops or at least in some areas. - Jon

Blender dives into 3D printing industry Blender 2.67 was released last week with a 3D printing toolbox. LGW spoke to Dolf Veenvliet, Bart Veldhuizen (Shapeways, Blendernation), and Rich Borrett (Ponoko) about the new tools and the future of 3D printing. As one of the impressively fast growing industries, 3D printing is lately all the rage in the press. Increasingly affordable (under $1000 now) desktop 3D printers make it possible to turn designs into real plastic or metal objects up to 30cm large in any dimension. Where does Blender fit into this picture? From tinkerers to designers While Blender is still considerably underestimated for use in various commercial scenarios, the adoption goes at an increasing pace, and both the project and the community are, in fact, self-sustaining. In his book “Makers: The Industrial Revolution”, Chris Anderson defines status quo of the whole market: As with first laser printers, 3-D printing is still a bit expensive and hard to use; it's not yet for everyone. The next big challenge

3D-printed dress for Dita Von Teese New York designer Michael Schmidt and architect Francis Bitonti have created a 3D-printed dress for burlesque dancer Dita Von Teese. Images above and top by Albert Sanchez. Designed by Schmidt and generated by Bitonti, the floor-length nylon gown was made using selective laser sintering (SLS), where material is built up in layers from plastic powder fused together with a laser. The rigid plastic components are fully articulated to create a netted structure that allows for movement. Draped over a nude silk corset, the black-lacquered dress is cinched in at the waist and exaggerated at the shoulders, and embellished with 12,000 Swarovski crystals. It was unveiled during an event at the Ace Hotel in New York earlier this week, as part of a showcase of products organised by 3D printing marketplace Shapeways, who printed the dress and were also behind the 3D-printed bikini we showed a couple of years ago. Photos are by Jeff Meltz unless otherwise stated. Mr.

TED 2013: 4D printed objects 'make themselves' 28 February 2013Last updated at 05:39 ET By Jane Wakefield Technology reporter Video of cube self-folding strand courtesy Self-Assembly Lab, MIT/Stratasys Many are only just getting their heads around the idea of 3D printing but scientists at MIT are already working on an upgrade: 4D printing. At the TED conference in Los Angeles, architect and computer scientist Skylar Tibbits showed how the process allows objects to self-assemble. It could be used to install objects in hard-to-reach places such as underground water pipes, he suggested. It might also herald an age of self-assembling furniture, said experts. Smart materials TED fellow Mr Tibbits, from the MIT's (Massachusetts Institute of Technology) self-assembly lab, explained what the extra dimension involved. "We're proposing that the fourth dimension is time and that over time static objects will transform and adapt," he told the BBC. The process uses a specialised 3D printer made by Stratasys that can create multi-layered materials.