Why 3-D Printing Will Go the Way of Virtual Reality 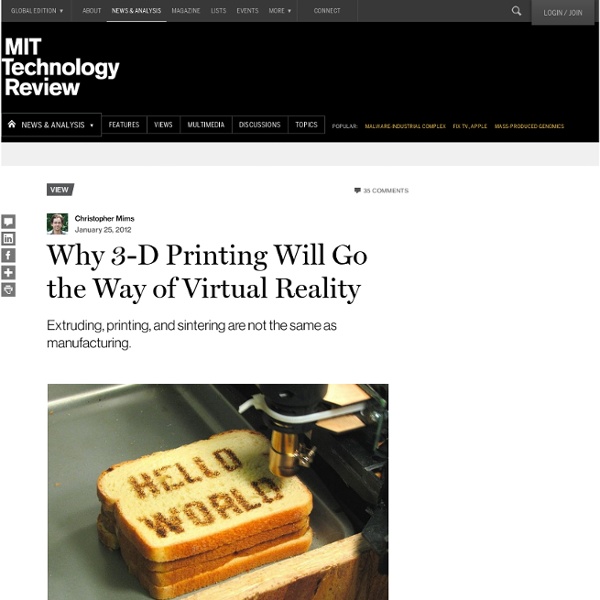 Update: Tim Maly has published an excellent counterpoint to this post over at the Tech Review Guest blog. There is a species of magical thinking practiced by geeks whose experience is computers and electronics—realms of infinite possibility that are purposely constrained from the messiness of the physical world—that is typical of Singularitarianism, mid-90s missives about the promise of virtual reality, and now, 3-D printing. As 3-D printers come within reach of the hobbyist—$1,100 for MakerBot’s Thing-O-Matic—and The Pirate Bay declares “physibles” the next frontier of piracy, I’m seeing usually level-headed thinkers like Clive Thompson and Tim Maly declare that the end of shipping is here and we should all start boning up on Cory Doctorow’s science fiction fantasies of a world in which any object can be rapidly synthesized with a little bit of energy and raw materials. Let’s start with the mechanism. Most 3-D printers lay down thin layers of extruded plastic.

Legal battles loom as home 3D printing grows | Sci-Tech | Deutsche Welle | 26.01 The controversial website The Pirate Bay announced this week that it would begin hosting digital files for visitors to download and print out on their 3D printers. The site has coined a new word - "Physibles" - for data objects capable and feasible of becoming physical. "We believe that things like three-dimensional printers, scanners and such are just the first," the group wrote on its website. "We believe that in the nearby future you will print your spare parts for your vehicles." The site has faced extensive legal battles in its home country of Sweden over potential intellectual property infringement of digital content. Last year, a UK team built a 3D-printed model plane 3D printing, which has long existed in the industrial world, has meanwhile gained traction in hobbyist community. An unclear judicial landscape Last year, Dutch designer Ulrich Schwanitz developed a 3D object, called "impossible triangle," which he sold through the 3D design company Shapeways.

Who will get the biggest slice of 3D-printed pie? | Crave MakerBot's Bre Pettis says his 3D printers are for everyone. 3D Systems' Cathy Lewis begs to differ. Each spokesperson made a strong pitch during our 3D printing roundtable at this year's Consumer Electronic Show. Who's right? 3D Systems: Old guard expertise 3D Systems announced its Cube 3D printer at CES this year, but the company has been involved with additive manufacturing and rapid prototyping since 1986. Along with its forthcoming $1,299 Cube, 3D Systems will also sell you its Sinterstation Pro DM250 (PDF), a $1 million machine that can print usable metal hip implants. Between the Cube and Sinterstation, 3D Systems offers 3D printers, laser-based stereolithography machines, and other additive manufacturing products for customers ranging from hobbyists to industrial and mechanical engineers. Cubify primarily offers two services. Cubify also lets designers sell their plans as standalone files. Does Cubify incorporate DRM or offer some other IP protection? "Nothing," Kulkarni said.

Kurzweil Warns Retailers at Shop.org to Plan for Major Paradigm Shifts Attendees of this year's Shop.org Summit were treated to a talk by inventor, author and futurist Ray Kurzweil, who said the exponential growth in IT/computing power means the world will be very different in 3 years. He warned retailers to make sure they build change into their plans and business models. "There are major paradigm shifts taking place in 3 years - every sector of society is being transformed, and retail cuts across everything we do," he said. He cited a development that could have a significant impact on retailers and on shipping carriers. Online sellers are already using 3D printers to "manufacture" their products - see this article in EcommerceBytes from June, "Shape of the Future: Make Your Own Products to Sell with Shapeways." Consumers will use augmented reality (AR) in stores, according to Kurzweil, so they will experience virtual reality and real reality at the same time. "Retail is the nexus where technology meets the consumer," he said.

3D Printing and the end of ownership - my plastic future There is a lot of discussion online regarding the possible (inevitable?) copyright/intellectual property/patent/legal fights around personal 3D printing. However, I’ve yet to see anything about a different fight that I have experienced several times now, so I figured I’d write about it and see what others think. Mine, mine, mine! As long as I’ve been printing on my Thing-o-Matic I’ve felt joy, wonder, and a bit of pride over the things I’ve been able to design and 3D print and hold in my hand in a matter of minutes. Several times over the past months that I have been 3D printing things, I’ve misplaced a piece or two here or there; or like today, a whole bag of pieces! And then I realized in one of those physically stumble and grab onto something moments: I can simply replace these “things” by 3D printing more of them. Unlike other items that share this sense of personal ownership, I hadn’t paid money for these items. Questions questions… Do we then lose the wonder of our own pieces?