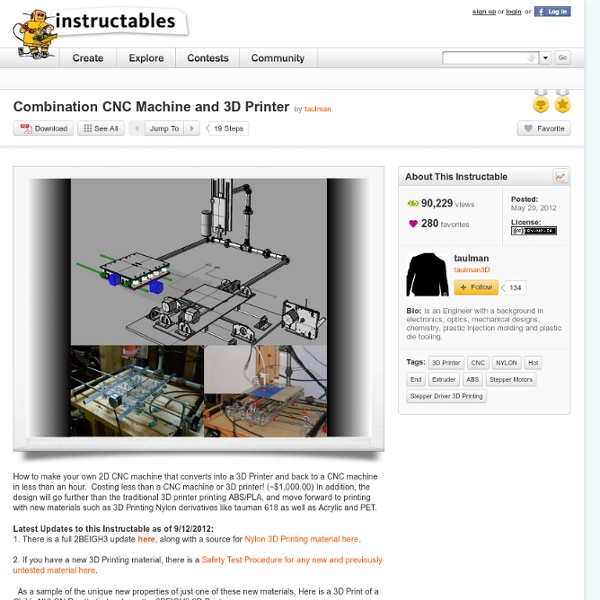 How to make your own 2D CNC machine that converts into a 3D Printer and back to a CNC machine in less than an hour. Costing less than a CNC machine or 3D printer! (~$1,000.00) In addition, the design will go further than the traditional 3D printer printing ABS/PLA, and move forward to printing with new materials such as 3D Printing Nylon derivatives like tauman 618 as well as Acrylic and PET. Latest Updates to this Instructable as of 9/12/2012: 1. 2. As a sample of the unique new properties of just one of these new materials, Here is a 3D Print of a Childs NYLON Prosthetic Insole on the 2BEIGH3 3D Printer. With the 3D Printer configuration of the 2BEIGH3, you will be able to print parts that meet much higher standards for strength, flexibility and pliability. Related:  3D printing CNC

Complete newbie step by step, 3D printer with all parts lists Intro, prelude, or just: who is this meant for? I wanted the title to include cheap, but lets face it: it is not cheap to build a 3D printer unless you have some/most of the components on hand or if you find just shy of £100 as cheap to make a tiny, not very good quality printer. This tutorial is all about starting from zero, figuring out and understanding all parts of a 3D printer and keeping costs down for this our very first build. The upside is that all the items can be reused for a larger better printer at a later stage. I have not kept strict tabs on costs, but the final printer, which is awesome, amounted to a total of just over £200 or so. In short, I'm going to build a 3D printer made from parts from old CD/DVD drives and some aluminium pieces. This project is about learning how the individual parts of a 3D printer fits together, to learn the basics here and move to larger projects later where we can reuse all the parts worth more than £10. Does the above lists describe you?

Reprap development and further adventures in DIY 3D printing: MENDELMAX - Quick-fit X and Quick-fit Extruder/s Back in October I started on a number of MendelMax builds. Time passes I got distracted by Christmas (and the excellent Slic3r) New Slic3r 0.7.1 out NOW! It has been a really amazing period from October-Feb with so many new machines being released into the community, my own needs and desires for the 'perfect' machine are now starting to materialise. MendelMax isn't 100% perfect, but it's the best machine I have built to date - and I really like it. MendelMax. I have now been using a 'finished' MAX for the last 6 weeks, It's really great, and easy to hack with, I have already upgraded quite a few parts and built a whole new X Carriage concept based on using the MAX for a while.MendelMax Created by kludgineer - the files and many derivatives can be found on Thingiveres Here - I have added links to my changes below - I built up a frame concept back in 2010 out of 20mm Extrusions, but it never got past this picture - It would have been an interesting machine. Big Max and Mini Max Extruder - Rich.

Building a drawer slide CNC machine for under $200! - Viewing Comments 1-40 Drawer Slide CNC Machine for under $200 Like many of us interested in this hobby, I wanted my own machine. But I didn’t want to dive into it, spend $2k plus and have a large paperweight out in my shop. The first step in the process was deciding what hardware I was going to use. I decided on the TB6560-3 axis driver bought off eBay for $22.00/free shipping. For stepper motors, I found a lot of 5 on eBay for $10.00/free shipping. The spindle is probably the most important part of the machine. There are a lot of misc hardware pieces need to build this machine, but most of which can be found at your local Lowes, Home Depot or local hardware store. Also, you will need some sort of software(and obviously a computer) to run the machine and to do drawings. ****EDIT**** I forgot to mention what I would do with the laser cutter if I were to win! (2) 2”x4”x8’ (2) Pairs of heavy duty drawer slides (1) small linear slide rail (bought off eBay $5.00/free ship) for Z axis (1) 3/8” x 36"aluminum U channel

» 2008 » September Linear motion – DIY ideas Fixing a Chinese Made CNC Stepper Motor Driver Board (TB6560 chips) | Home, DIY & Stuff (Click to Enlarge)Fig. 1: Chinese Made CNC Motor Controller Board with Toshiba TB6560 motor driver chips (under heat sink) I have finally fixed the problem of missing steps in my Chinese made TB6560 CNC Stepper Motor Controller! Keep reading for a total overview of all the associated CNC stepper motor controller problems experienced and the reasons for the problems, or jump down the page to get straight to the Step-by-Step guide on how I fixed the board . This stepper motor controller board fix may look complicated, but with a little explanation and with the help of pictures, the changes should be relatively quick and simple for most people. The board fix should also assist people using similar Chinese made stepper motor controllers (3 axis, 4 axis and 5 axis boards) for 3D printer, laser cutter, plasma cutter and plotter applications. I have tried to keep this guide as simple as possible so people with little electronics or CNC experience do not get discouraged. The Initial Problem 1. 2.

Make Your Own 3D Printer Filament with the ExtrusionBot There have been several attempts at developing a practical filament-making machine. Is ExtrusionBot the one that succeeds? We’ve looked at a few similar devices and found most of them to be impractical for various reasons, not the least being quality of output. In today’s personal 3D printers (at least the plastic filament-based ones) the quality of input filament is critical. Let’s take a look at the ExtrusionBot, said to be “The world’s fastest filament extruder”. The ExtrusionBot has a unique design: it’s upright, whereas most of the other filament makers we’ve seen are horizontal and take up much more space. Also unlike many other filament makers, the ExtrusionBot includes an “automatic spooling mechanism so filament does not end up as a tangled mess on the floor”. The ExtrusionBot includes several other interesting features: Swappable nozzles to enable extrusion of different filament diameters. Of course, the major benefit of making your own filament is low cost materials.

Useful Software Packages This is the place to put details of software packages that are useful for RepRap (like CAD programs), but that are not part of the RepRap project itself. Give a paragraph or so of explanation on each package and a link to its home page. Please also say what platforms it runs on, what licence it is distributed under, and whether it is free. 2D and 3D CAD software (Other places that discuss CAD software: RepRap Options#CAD Tools; RepRap forum "3D Design tools"; "open source CAD"; etc.) Open-source software Assimp Open Asset Import Library (short name: Assimp) is a portable Open Source library to import various well-known 3D model formats in a uniform manner. Art of Illusion AoI is a graphics-oriented 3D modeler that's written entirely in Java. can be used to output STL files. or add Skeinforge to output GCode. Although it is a 3D graphics design tool, it is also good for engineering design. There is also a page on Reprap-specific plugins for AoI. Art of Illusion Blender Blender Also See: BlenderCAD

Italian 3D-Printing Company Creates Unique Furniture Combining Traditional Craftsmanship & 3D Technology Italy is quickly emerging as a competitor in the global 3D printing market in no small measure thanks to one company, 3DiTALY. One of the company’s founders, Antonio Alliva, and his design team showcased 3DiTALY’s latest project in late April at Milan Design Week, truly an important world stage for all things furniture. One of the primary goals of 3DiTALY is to explore the potential for combining 3D scanning and printing technology with traditional furniture design techniques, and the project, titled “Eggform,” did just that. 3DiTALY, which began a decade ago as a kind of experimental laboratory, offers a wide range of services, including workshops, labs, a retail and exhibition space in Rome that invites visitors to explore 3D printing. The Eggform project’s primary goal was to produce Design Week-quality furniture with the use of 3D technology. The design team began by using high resolution 3D scanners to scan organic textured surfaces like leaves, feathers, and wood grain.