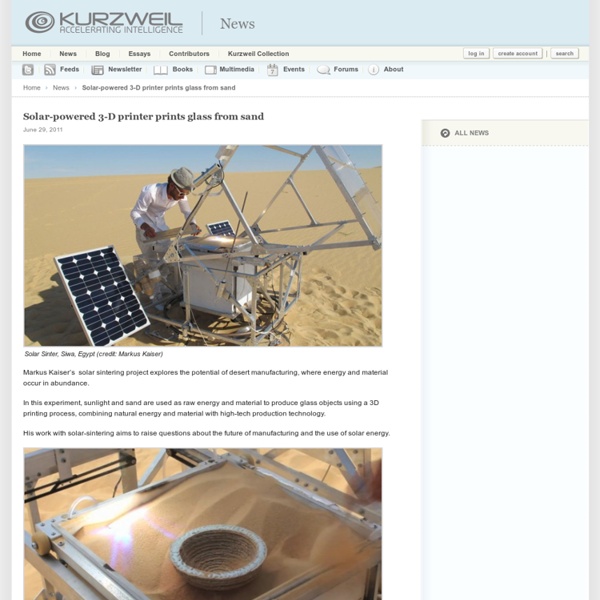 A Desktop Machine To Turn Your Old Plastic Into 3-D Printing Fodder In that not-too-far-off day in the future when we’re all using 3-D printers to make new organs, bones, pieces of food, and so on, we may look back and thank Tyler McNaney, a second-year mechanical engineering major at Vermont Technical College who created the Filabot--a "3-D plastic extrusion system" that takes recyclable plastic and turns it into filament for 3-D printers. If you want to buy a kilogram of 3-D printer filament today--usable in 3-D printers like the MakerBot--it will cost you about $50. But all those plastic soda bottles, detergent bottles, and other pieces of product packaging that you recycle every week? Those are basically free. McNaney’s machine takes any recyclable plastic and grinds, melts, and extrudes it so that it can be rolled onto a spool for 3-D printing. According to McNaney’s Kickstarter video, the machine can make eight feet of filament from a milk jug and detergent bottle.

7 Classic Disney Movies Based On R-Rated Stories Left on his own, Tarzan receives a telegram that reveals him as the rightful heir to Clayton's estate and all the property that comes with it (which includes Jane, because women are things). Instead of saying the word, kicking Clayton out of his own house and claiming Jane for tax purposes, he chooses to stay silent, thinking that Jane is happy being with Clayton. And... that's it. The Possible Discovery of the Higgs Will Shake the Foundations of Physics We are all aware that the Large Hadron Collider (LHC) is the most powerful machine on planet earth and not yet operating at its full capacity. Since 2008, scientists at the CERN physics lab have slowing been increasing the intensity of the particle beams, with each time seeming to break its previous record. It was but a few days ago that the LHC lit up the headlines once again for breaking a world record of beam intensity previously achieved by Fermi's Tevatron in Batavia, Ill. In 2010, the Fermi Tevatron set the record for a beam intensity of 4.024 x 1032cm-2s-1 and the LHC recently broke that record on April 22nd at around midnight Geneva time by reaching a luminosity of 4.67 x 1032cm-2s-1.

Ideology Now: A world turned upside down The lecture tried to explore how the concept of contradictory ideology espoused by Marx and Engels may be the key to understanding our culture and perhaps encourage changes. Its central idea is that we need to revive the old Marxist notion of false consciousness. Laser Crosswalk Saves Pedestrians From a Painful Death When the light turns red, a huge laser wall projecting apparitions of crossing pedestrians spans across the crosswalk. The concept is designed to keep crossing pedestrians safe from any overzealous drivers who otherwise might have ran the red light. Link [via] A new twist for animated movies (Photo credit: Chris Mueller, Wired) Generally, traditional stop-motion animation uses clay figures or other types of figurines as the “puppets,” which are photographed for one frame, then moved and manipulated a bit, and then photographed again for the next frame. The series of these frames, of course, becomes the movie. For a sophisticated film, it’s not just the moving of the figures, but the manipulation of their expressions, that is most time-consuming. With clay, it’s a bit easier, but think about hard surface figures, where you have to create hundreds of facial features for a human figurine’s head. That’s a lot of manual work.

Neil Harbisson: the world's first cyborg artist "I can have phone calls to my head," says Neil Harbisson, sitting across the table from me. Dangling over his forehead is an antenna that curves up and over from the back of his skull. The device, which he calls an "eyeborg", was recently upgraded, meaning his skull is now Bluetooth-enabled. "I can either connect to devices that are near me," he says, "or I can connect to the internet.

NASA's lasercom system aims to beam a HD video feed from Mars As cameras technology has allowed us to increase the resolution of the images we capture and video we watch, so has the bandwidth required to transfer that imagery. In space, the amount of data that can be sent is currently limited due to the radio frequency (RF) systems being relied upon. NASA is trying to fix that limitation by testing a new communications system called a Laser Communication Relay (LCR). LCR is a desirable replacement because the optical/laser communication system (lasercom) allows for much higher data transfer rates while retaining the same size, weight and power requirements of existing RF systems.

GitHub Codes Up Computer-Less 3-D Printer Software “Make Me” frees users from using dedicated computers with their 3-D printers. Photo: Courtesy GitHub GitHub, the popular and well-funded version-control company, is entering the 3-D printing market. They aren’t jumping into the world of hardware (not yet at least), but instead are automating tedious workflow issues, namely printing parts without leaving a laptop tethered to the 3-D printer for hours at a time. Their solution, called Make Me, allows users to push files to the MakerBot via HTTP and monitor the build process via webcam. It’s a small feature, but valuable for environments where multiple users are keen to make use of a shared resource.

What happens when you leave 15,000 2p coins by Regent's Canal as a social experiment... two thieves swipe them all It was one of London's stranger social experiments - dump 15,000 2p coins on a towpath and then film what happens. AirBnB host Jamahl McMurran and his guest Lana Mesic, a photographer, dreamt up the stunt to use up a mound of coins left over after being used in an art installation. They bagged them up and hauled them down to the towpath on the Regent's Canal before setting up a camera in Mr McMurran's flat overlooking the area. The pair got four hours of footage before they scheme came to a halt when two thieves turned up and swiped the £300 pile. The coins were put there as part of a bizarre social experiment (@JHM_UK)