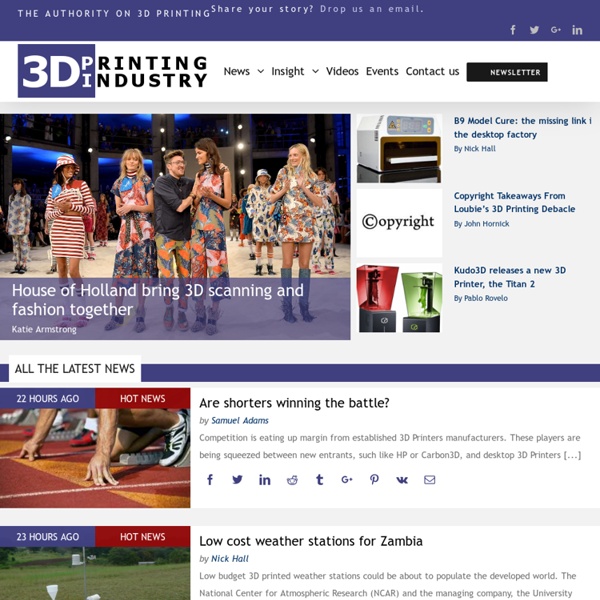 3D Printing You are in: Future Technologies : 3D Printing 3D Printing Imagine a future in which a device connected to a computer can print a solid object. A future in which we can have tangible goods as well as intangible services delivered to our desktops or highstreet shops over the Internet. And a future in which the everyday "atomization" of virtual objects into hard reality has turned the mass pre-production and stock-holding of a wide range of goods and spare parts into no more than an historical legacy. Such a future may sound like it is being plucked from the worlds of Star Trek.

Blender Tutorial: Blender 3D printing tutorial This tutorial was made for Blender users with an interest in 3D printing. It covers the essential information for taking your 3D model and turning it into a 3D object using the free CAD software. Through this tutorial, you will learn some of the best practices for modeling, correcting and exporting a 3D file for 3D printing with Blender 2.7. Specifically this tutorial covers the following points:

the hitchhiker presents The hitchhiker's guide to social change The hitchhiker's guide to social change started with JūHū, a social enterprise with the aim of fighting stigmatization of people with disabilities by presenting them as the craftsmen of high quality design objects. A project created in collaboration with Elina Busmane. Throughout the process of designing JuHu, we realized there were many tools to develop projects when they are well defined, however we had to face a lack of tools and methodology fot the first critical steps of creating a social initiative. During my master work in social design at the Design Academy Eindhoven in parallel to the creation of the JūHū project, I have been working on a creative methodology accessible by all to inspire and accompany projects leaders in developing their ideas.

Comment une antenne imprimée en 3D pourrait changer Manufacturing 0 Flares Twitter 0 Facebook 0 Google+ 0 Pin It Share 0 LinkedIn 0 inShare0 Reddit 0 0 Flares × Many people question the utility of 3D printers because they believe they’re only capable of printing simple plastic parts. 3D printers are capable of much more. For a while now they’ve been creating objects from glass, ceramic, and metals, among other basic materials. Getting Started with 3D Design 3D Design Software 101 While MakerBot operators are more than happy to print the tens of thousands of incredible objects posted to Thingiverse, eventually many want to get started designing models of their own. Your mission: to create a solid, manifold (watertight) STL-formatted file for importing into MakerWare or ReplicatorG. STL is the most widely used format for stereolithographic CAD files, so the design application options are vast. ReplicatorG also offers experimental file import capability for OBJ and Collada, two other widely used formats, although the files are then converted to STL, and MakerWare supports OBJ as well as STL. You can also download 3D swiss army knife tools like MeshLab and netfabb Studio Basic, which can open dozens of different file formats and export them as binary or ASCII STL files, opening up even more models to ReplicatorG.

Robotics - Gizmag In both an impressive display of innovative technology and a glimpse of a future in which humans could be redundant, Volvo has shown off its Robot-based Autonomous Refuse handling (ROAR) project. The system uses drones to locate refuse bins and robots to collect and empty them. Read More Two marine scientists have shown that autonomous underwater vehicles (AUVs) can be programmed to make independent decisions and trigger new missions in real time based on data coming from multiple sensors. They believe this could reveal much about the life of squid and other marine creatures. Read More Blender 3D Modeling Software You can do 3D Open Source modelling and animation with Blender software. Blender 3D Modeling Software screenshot About Blender software This free CAD software was published by NaN (Not a Number). Originally, Tom Roosendaal, the cofounder of NeoGeo, the largest 3D animation studio in the Netherlands, was behind creating this CAD software.

What is a Digital Nomad, and How to Become One Becoming a digital nomad has been a long time dream of mine that I have finally started to work on realizing. A digital nomad, in short, is someone who earns their income entirely online, thus being able to work from anywhere: location independent. To most people this sounds like a hoax, or an impossible myth. To others, it is a whole new world. Rapport McKinsey identifie également l'impression 3D comme une technologie disruptive clé 1 Flares Twitter 0 Facebook 0 Google+ 1 Pin It Share 0 LinkedIn 0 inShare0 Reddit 0 1 Flares × James Manyika and other researchers at McKinsey have identified 3D printing as a key disruptive technology and believe by 2025 it will have a significant impact on the global economy. They forecast that by 2025, 3D printing in total could have an economic impact of $230 – $550 billion based on its ability to reduce cost and create value through customization.

Mechanical Design for 3D Printing - The Adventures of Eiki Martinson There's a great deal of hype surrounding the technology of additive manufacturing or 3D printing just now. I'm sure my audience has heard things like “It'll make whatever you can imagine”, to which the appropriate answer is, after Han Solo, “I don't know, I can imagine quite a bit.” In truth, like any manufacturing technique, 3D printing is ideal for some things, marginal for others, and completely unworkable for a few; but with a bit of knowledge about the limitations of your particular additive process and some clever workarounds, you can expand the capabilities of the machine and avoid the inevitable hype hangover.

Humanoid Robot Starts Work at Japanese Department Store Dressed in a kimono and smiling, Aiko Chihira greets shoppers at the entrance of Tokyo's Mitsukoshi department store. But Chihira is no regular employee -- she is a humanoid robot. Developed by Toshiba last year, the robot made its debut at the store on Monday in a new role interacting with customers. Speaking Japanese, Chihira, which has human-like features and blinks, can also be programmed to speak in other languages such as Chinese.