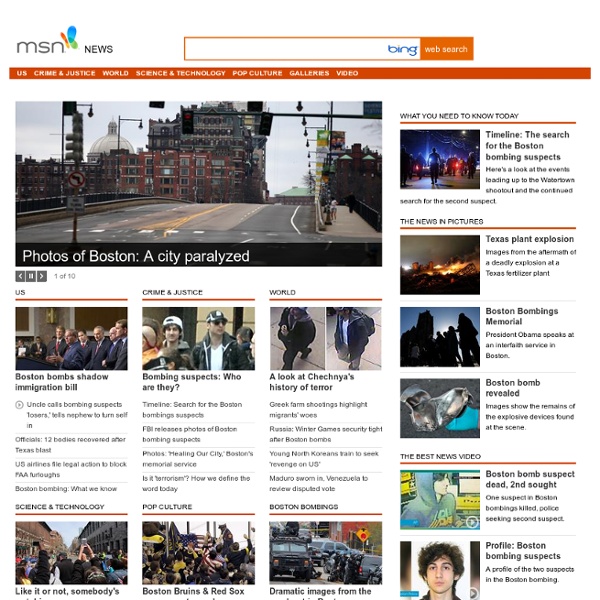 White & The Bear children's restaurant has white walls and timber furniture Sneha Divias Atelier has swapped stereotypical primary colours for neutral tones inside this restaurant in Dubai, which is designed specifically for children. Located in Dubai's Jumeirah district, White & The Bear has been designed by Sneha Divias Atelier with "urbane" interiors that avoid the bright shades usually used within child-focused spaces. The restaurant and retail space is instead decked out with neutral colours and materials that, according to the studio, will foster children's curiosity. "At the atelier we selected such distinct palettes for kids' spaces to not overstimulate the senses," explained the studio.

The Truth about Aaron Swartz’s “Crime” « Unhandled Exception I did not know Aaron Swartz, unless you count having copies of a person’s entire digital life on your forensics server as knowing him. I did once meet his father, an intelligent and dedicated man who was clearly pouring his life into defending his son. My deepest condolences go out to him and the rest of Aaron’s family during what must be the hardest time of their lives. If the good that men do is oft interred with their bones, so be it, but in the meantime I feel a responsibility to correct some of the erroneous information being posted as comments to otherwise informative discussions at Reddit, Hacker News and Boing Boing. Apparently some people feel the need to self-aggrandize by opining on the guilt of the recently departed, and I wanted to take this chance to speak on behalf of a man who can no longer defend himself. I was the expert witness on Aaron’s side of US vs Swartz, engaged by his attorneys last year to help prepare a defense for his April trial.

A Compilation of Vintage Textures for Designers Resources June 10, 2010 Textures are one of the most used resources in making great designs. They can accentuate your images to better portray the feel of the design you’re aiming for. Vintage textures, for instance, can add a classic or nostalgic touch to your work. Here at You the Designer, you need not blast to the past to get this brilliant effect. Why Does Mississippi Vote Republican? (Video) Alexandra Pelosi wrote on Real Time with Bill Maher: Why is it that the poorest states in America are red states? It seems the poorer the state, the more Republican it is. The Census Bureau’s 2011 Statistical Abstract shows the GOP finds their strongest support in places where poverty and median household income are the worst. Case in point: Mississippi ranks dead last economically, with the lowest per capita income in the country, yet according to Gallup, Mississippi is the most conservative state in the union.

Top 10 Most Awesome Cats of 2010 - The Daily Treat The year 2010 was beyond reasonable doubt the year of the Cat, and The Daily Treat celebrated this fact with much feline fanfare! Standing cats, om nom-noming cats, twittering cats, klepto-maniac cats, mime cats, patty-caking cats and tank cat were just a few of the famed felines that filled our screens and hearts this year. And who can forget Trashcan Cat and Judgemental Cats? CASE-REAL converts dry cleaner store into sushi restaurant in fukuoka CASE-REAL has transformed a former dry cleaner’s store with an uneven exterior wall line and roof shape into sushi takigawa, a 20 sqm counter-type sushi restaurant in fukuoka, japan. while its exterior, whose walls are finished with stucco, is designed to quietly blend into the surroundings at night, the restaurant’s interior features a distinct atmosphere through a palette of similar tones that comprises materials such as gingko, japanese cypress, and clayey walls. all images by hiroshi mizusaki little decoration and minimal details, such as the restaurant’s sign, create a tranquil atmosphere, while the tapered ceiling that radially spreads from the preparation area towards the guests, creates a centrality withing the small space. adding to the tranquil interior, the material and color palette incorporates similar tones and materials such as gingko on the counter, clayey walls and ceiling, and japanese cypress.

RIP, Aaron Swartz Click for ongoing posts about Aaron, his memorial service, his death, and the malicious prosecution brought by the DoJ against him To the extent possible under law, Cory Doctorow has waived all copyright and related or neighboring rights to "RIP, Aaron Swartz." Update: Go read Lessig: "He was brilliant, and funny. A kid genius. A soul, a conscience, the source of a question I have asked myself a million times: What would Aaron think? That person is gone today, driven to the edge by what a decent society would only call bullying.

Infant dies after being raped; mother encouraged the attack and watched - Detroit Crime A mother is under arrest after allegedly allowing her boyfriend to rape her infant child, causing the child to die. Jessica Lynn Howell, 25, of St. Charles County, Missouri, was arrested in connection with the death of her four-month-old daughter, Ashlynn Lilith Peters. Ashlynn died December 3, 2012. Originally Howell was not charged as she claimed innocence in the attack, but prosecutors say text messages between Howell and her boyfriend Jordan Lafayette Prince are conclusive and damning. 12 Hilariously Inappropriate Kids Products Pop-up book. Inflatable Wolverine. Who wants to blow up this toy? Illustrated child's book. I wonder who would ever give a little girl a doll of a deceased anti-Semitic genocidal maniac. These gummi lighthouse candies are highly inappropriate.

Home cat Michael Jamison and his girlfriend Jackie Smith brought home a kitten.They eat with him at the table and sleep in one bed. Well, let’s wish them good luck. Portal 92 designs Village Cafe to evoke the feeling of an Indian village A frame of monolithic concrete portals supports a bar and cafe, designed by Portal 92, which overlooks a raised terrace of terracotta-coloured seating in Moradabad, India. Called The Village Cafe, the spaces are split across two levels, providing locals with both indoor and outdoor areas to eat arranged around a winding, maze-like route. Squeezing a wide variety of spatial conditions and materials into a relatively small space, the project was designed to evoke the feeling of being in an Indian village.

aaronsw Jasmina Tesanovic at 3:35 am Tue, Apr 1, 2014 • 3 Recently I saw a movie on the life and death of Aaron Swartz, who is nowadays often called a martyr for the freedom of the Internet. People, nations and governments like martyrs. They love them, they need them. Martyrs are part of our bipolar, black and white society constructed from good and bad guys, who always do good and bad deeds. Martyrs are those who have escaped our human condition, of being judged by people as people. Senior dog stolen during Texas home invasion - National Dogs Last Friday, a senior dog disappeared during a home invasion in north Austin, Texas. According to the dog's owner, Stephanie, their 13-year-old bull terrier, "Rica," has been missing ever since someone broke into their home which is located in the Georgian Acres neighborhood in Austin. Rica weighs approximately 50 pounds and requires medication for seizures; she eats a special food. According to Stephanie, there was a possible sighting of Rica on Tuesday morning near Watson and Anderson and also, on Saturday, at Justin and Woodrow.

David Icke's marriage breakdown: He once claimed he's the Son of God and the world is run by alien lizards, but the story of his marriage breakdown is almost as weird By Natalie Clarke Updated: 08:11 GMT, 9 January 2012 The audience at the theatre in Times Square, New York, sat in reverential silence as David Icke took the stage and made his great revelation. Our planet, he declared, is secretly ruled by a race of reptile-like aliens.

It is indeed an awesome video with that hint of sadness but not too much. ;) by evelien81 Apr 24

Thought this was awesome. Glad to see it spreading around. by vigarde Apr 24