How to Make Everything Ourselves: Open Modular Hardware 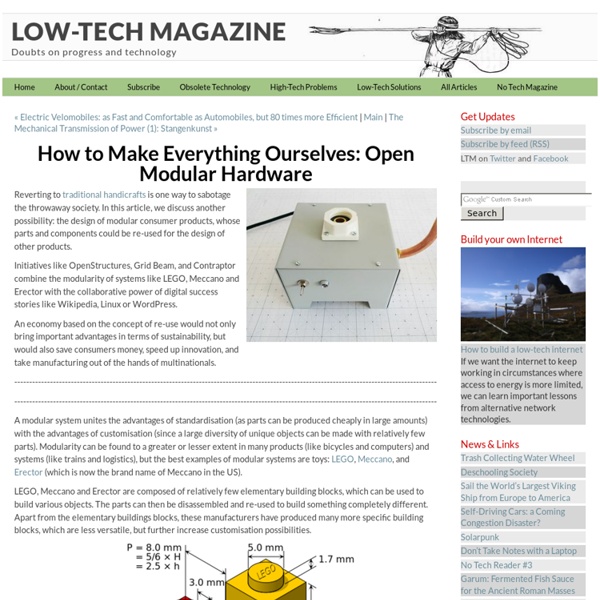 A modular system unites the advantages of standardisation (as parts can be produced cheaply in large amounts) with the advantages of customisation (since a large diversity of unique objects can be made with relatively few parts). Modularity can be found to a greater or lesser extent in many products (like bicycles and computers) and systems (like trains and logistics), but the best examples of modular systems are toys: LEGO, Meccano, and Erector (which is now the brand name of Meccano in the US). LEGO, Meccano and Erector are composed of relatively few elementary building blocks, which can be used to build various objects. The parts can then be disassembled and re-used to build something completely different. Apart from the elementary buildings blocks, these manufacturers have produced many more specific building blocks, which are less versatile, but further increase customisation possibilities. Grid Beam, Bit Beam, Open Beam, Maker Beam and Contraptor OpenStructures Circulation of Parts

A tiny Arduino laser cutter The basis for Groover's axis was the two mini stepper motors from the DVD-RW drives. The motors drive the DVD head mechanism which either moved the laser cutting head, or the cutting table. My first starting point was to find a similar set of motors, and a reclaimed laser diode. However I wanted a slightly different design. Where Groover has the cutting table move on the Y Axis, I wanted a fixed cutting table. Sugar solution turns embryos and brains see-through, allows for high-res imaging A team of neuroscientists at the RIKEN institute in Japan have created a liquid, primarily fashioned out of fructose sugar, that turns flesh transparent. This aqueous solution, called SeeDB, has been successfully used by the researchers to make mouse embryos and brains transparent without damaging any of the fine structures within the samples. The researchers were then able to visualize the entire neuronal circuitry of a mouse brain on a whole-brain scale, without having to first cut it into slices — an important first for neuroscience. In technical terms, the RIKEN researchers have created an optical clearing agent. It’s somewhat hard to believe, but this clearing agent is essentially just a saturated solution of fructose (fruit sugar) in water, with some α-thioglycerol to prevent browning. Basically, a tissue sample — such as a mouse brain — is soaked in the fructose solution, and after three days it’s almost transparent.

Got a Kinect and a laptop? Get ready to 3D print Volumental's vision is to be able to 3D print more or less anything you can see Image Gallery (7 images) Scanning and 3D printing an object could become much simpler if 3D printing company Volumental is successful in crowdfunding the development of a web app which would allow users to scan and print 3D objects using nothing more than a Kinect sensor and a web browser.

SafariSeat: Open source wheelchair for developing countries. by Uji We've designed a revolutionary wheelchair for people in developing countries. Safariseat gives people independence, unlocking access to education, employment and a life beyond the confines of their own home. We’ve put all our resources into getting this far - now we need your support to develop the open source toolkit and begin manufacture with local workshops in Kenya to make as many SafariSeats as possible.

Arduino Laser Engraver I started this project because I wanted to make something that had mechanical, electrical and software components. After looking around on Instructables, I figured that an Arduino based laser engraver would be an interesting machine to make, and that the machine itself could make interesting things. Laser diodes have also advanced quite a lot in the last few years, allowing reasonably powerful DIY laser engravers to be made without the hassles of laser tubes. This machine can engrave wood and cut paper. I haven't tried other materials yet because there is no fume extraction capability - plastics generally create toxic gases when burnt.

Collective Action Newsletter Tine De Moor (PhD; Ghent, Antwerp, and London) is professor "Institutions for Collective Action in Historical Perspective" at the department for social and economic history of Utrecht University. Through an interdisciplinary approach for the study of the long-term evolution of rural commons, De Moor has been able to revise the historical basis of the widely debated metaphor of the Tragedy of the Commons, as launched in 1968 by G. Hardin. Whereas from a modern-day perspective the flaws in Hardin’s theory have been well-documented, the historical deficiencies in his theory were hardly ever studied. Riding the open hardware wave with ladyada If you haven’t already, check out ladyada’s website. Sheâ€™s something of a veteran of open sourcing hardware, having developed several (mainly electronic) projects while at MIT and, indeed, since. My favourite is the Spoke POV, a persistence of vision toy for your bicycle wheel. I have made up a couple and found her various source documents incredibly well written and helpful (she provides detailed assembly instructions, links to places to source components, schematics of the circuitry, circuit board layouts, source code for software elements.

The maker movement isn’t just for hackers anymore “I’ve always done a certain amount of work with my hands, but my whole career was in software.” Rich Pekelney (pictured above) is standing in front of one of many mammoth machines in San Francisco’s TechShop, a DIY paradise full of industrial equipment for makers of all kinds. The space is intimidating at first glance. Loud mechanisms tower and sprawl around the workshop’s several stories; people in welding masks and heavy protective gloves quietly bustle from one corner to another.

Why Paul Mason is wrong: you can't innovate away social oppression Excerpted from a critique of the PostCapitalism thesis by Kate Aronoff: “Matt Taibbi wrote in 2010, banks are a “highly sophisticated engine for converting the useful, deployed wealth of society into the least useful, most wasteful and insoluble substance on Earth — pure profit for rich individuals.” Technology is just another hurdle they can ably jump over. Even against the information age’s more egalitarian impulses, tech remains firmly in the hands of the one percent — albeit a nerdier, tanner and more socially progressive one.

The Most Incredible 3-D Printed Things We’ve Ever Seen ⚙ Co The levees have broken for 3-D printing, and the resulting deluge of printing-concepts-on-the-cheap is flowing faster than we can gather. The best of these rise to the surface for their innovating predictions of a faster/safer/healthier future. A Robotic Hand That Doesn’t Cost An Arm And A Leg Teen engineer Easton LaChappelle created his first robotic hand out of Legos, fishing wire, and surgical tubing--a feat that earned him 3rd place at the Colorado Science Fair. Open Source Ecology Open Source Ecology Home / TED 2011 Filmed at TED2011 – Posted at ted.com on Apr 2011