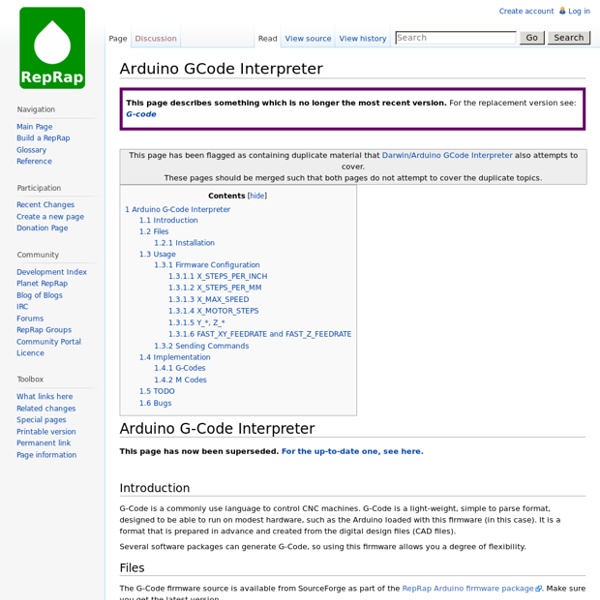 This page describes something which is no longer the most recent version. For the replacement version see: G-code This page has been flagged as containing duplicate material that Darwin/Arduino GCode Interpreter also attempts to cover.These pages should be merged such that both pages do not attempt to cover the duplicate topics. This page has now been superseded. For the up-to-date one, see here. Introduction G-Code is a commonly use language to control CNC machines. Several software packages can generate G-Code, so using this firmware allows you a degree of flexibility. Files The G-Code firmware source is available from SourceForge as part of the RepRap Arduino firmware package. Installation Once you download the proper files, there are a couple steps you need to do: Ubuntu users will also have to upgrade their avr-gcc; the standard one contains a bug. Usage Firmware Configuration We'll cover each of the variables below: This variable stores how many steps to take to move the X axis 1 inch. Bugs Related:  3d-printing

G-code This page tries to describe the flavour of G-codes that the RepRap firmwares use and how they work. The main target is additive fabrication using FFF/FDM processes. Codes for print head movements follow the NIST RS274NGC G-code standard, so RepRap firmwares are quite usable for CNC milling and similar applications, too. There are a few different ways to prepare GCode for a printer. As many different firmwares exist and their developers tend to implement new features without discussing strategies or looking what others did before them, a lot of different sub-flavours for the 3D-Printer specific codes developed over the years. Introduction A typical piece of GCode as sent to a RepRap machine might look like this: The meaning of all those symbols and numbers (and more) is explained below. To find out which specific gcode/s are implemented in any given firmware, there are little tables attached to the command descriptions, like this one: Here means: yes Fully supported. experimental automatic no

GRBL Grbl is software for controlling the motion of machines that make things. If the maker movement was an industry, Grbl would be the industry standard. Most MakerBots and open source 3D printers have Grbl in their hearts. It has been adapted for use in hundreds of projects including laser cutters, automatic hand writers, hole drillers, graffiti painters and oddball drawing machines. Due to its performance, simplicity and frugal hardware requirements Grbl has grown into a little open source phenomenon. When we ordered our first computer controlled mill in 2007 we were stumped as to how we would control it. Choosing a controller We decided on the Arduino for several reasons. Yet it is a terrifyingly puny machine in the face of this task. What Grbl has to do in 2kb: Parse G-Code, a cryptic computer language hailing from the 50s used to describe the idealised actions of milling machines. Making it all fit Uptake Community Even Westvang using Grbl to make a kawaii stencil for his daughters ^..^ .

Closed Loop Control For 3D Printers One of the bigger problems with any CNC machine or 3D printer is the issue of missed steps when moving the toolhead. If a stepper motor misses a step, the entire layer of the print – and every layer thereafter – will be off by just a tiny bit. Miss a few more steps, and that print will eventually make its way into the garbage. [Misan] has the solution to this: closed loop control of DC motors for a 3D printer. Most printer firmwares use an open loop control system for moving their motors around. [Misan]’s solution to this was a DC motor coupled to an optical encoder. The entire build is heavily derived from ServoStrap, but [Misan] has a very cool demo of his hardware: during a print, he can force the X and Y axes to either side, and the Arduino in each motor will move the print head back to where it needs to be.

Magnetic Rotary Encoder v1.0 If your RepRap only uses stepper motors, like most of the top-rated RepRaps in the Comparison of Electronics, and you run them at low speed and low acceleration so they don't skip steps, you don't need this or any other encoder. However, if you want to run faster than possible with a stepper motor, read on. As of 2014, this is the most recent magnetic rotary encoder designed for RepRap. I am a part of both, Generation 2 Electronics and Generation 3 Electronics Systems. This is an advanced, surface mount board. Don't worry though, You Can Do It! The Magnetic Rotary Encoder board is based around the Austria Microsystems AS5040 chip. Get It! There are currently no known kit sellers. Files You can download the electronics files from Sourceforge. This file contains the following: GERBER files for getting it manufactured PDF files of the schematic, copper layers, and silkscreen Eagle source files for modification 3D rendered image as well as POVRay scene file exerciser code to test your board.

Grbl Controller 3.0 | zapmaker Downloads: Souce Code: Record Issues Found: Grbl Controller is software that is designed to send GCode to CNC machines, such as 3D milling machines. Version 3.0 is has been optimized for the Arduino to control Grbl shields. Grbl Controller is written using the Qt cross-platform libraries. Qt is pretty cool because you can create a nice GUI application for Windows, Mac and Linux. Why am I writing about this? I found a project on github called GrblHoming aka Grbl Controller, which was originally developed by Kosme, which showed promise for running native C++ on Linux, however it needed some attention. I forked the project and started tweaking it to compile and run under Linux. For information on how to build it on all three platforms, check out this multi-page “manual”. Give it a try and let me know if it works for you.