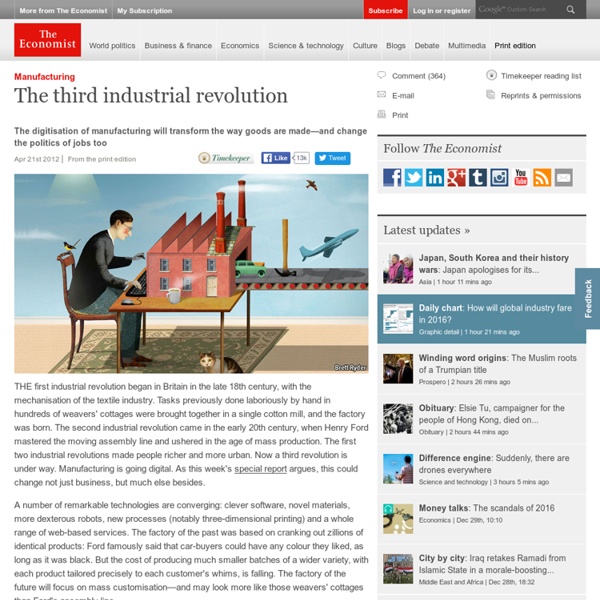 THE first industrial revolution began in Britain in the late 18th century, with the mechanisation of the textile industry. Tasks previously done laboriously by hand in hundreds of weavers' cottages were brought together in a single cotton mill, and the factory was born. The second industrial revolution came in the early 20th century, when Henry Ford mastered the moving assembly line and ushered in the age of mass production. The first two industrial revolutions made people richer and more urban. Now a third revolution is under way. Manufacturing is going digital. A number of remarkable technologies are converging: clever software, novel materials, more dexterous robots, new processes (notably three-dimensional printing) and a whole range of web-based services. Towards a third dimension The old way of making things involved taking lots of parts and screwing or welding them together. The applications of 3D printing are especially mind-boggling. Other changes are nearly as momentous.

IDC Manufacturing Insights to Reveal Top 10 Predictions for 2013 IDC Manufacturing Insights to Reveal Top 10 Predictions for 2013 Visit for further information Webinar emphasizes increasing role of smart services and highlights the third industrial revolution The Third Industrial Revolution - a response to the Economist The Third Revolution by nature of its high mechanisation and non-labour intensity means an ever larger proportion of the general public will be excluded from the production process or remunerated to ever lesser extents. Amid the atonal monotony of crisis that has increasingly sirened from the media during the last several years, it has been very rare to hear of ‘good news’ stories with regards to political economy, manufacturing or industry, particularly within the context of the OECD countries. Equally rare are stories that choose to take a longer term view, that zoom out of the immediate predicament in order to take a more macroscopic view of things. That ask ‘where next?’

World's Happiest Countries: Australia Tops OECD Better Life Index People all over the world are fascinated by happiness rankings and how their own countries fare in global league tables. In some places, such as Britain, ratings of national well-being aren't just a matter for policy wonks but a subject of widespread popular interest. The Paris-based Organization for Economic Cooperation and Development (OECD) is the latest institution to jump into the happiness-rating business with its new Better Life Initiative, a detailed survey of 24 indicators in 11 categories--ranging from civic engagement to environmental quality--across its 34 member states plus Brazil and Russia. When all of the categories are weighted equally, the top-performing country in the world is Australia, cited for its strong community spirit and high level of life satisfaction. The lowest-ranked country among those studied was Turkey, whose weak scores on the same two criteria dragged it below Mexico, Chile, and Brazil. Read on for an introduction to the world's happiest countries.

MIT researchers to 3D print a pavilion by imitating silkworms Researchers at MIT plan to 3D print a pavilion by imitating the way a silkworm builds its cocoon. The research team, headed by architect and Mediated Matter Group founder Neri Oxman, attached tiny magnets to the heads of silkworms to discover how they “print” their pupal casings around themselves. “We've managed to motion-track the silkworm’s movement as it is building its cocoon,” said Oxman. Pebble: E-Paper Watch for iPhone and Android by Pebble Technology Want your watch to tell you when your next bus is leaving? Maybe you're jonesing to see your compile status or recent github commits.. Think push notifications, directly to your watch using the data connection on your phone.

Arkema Presents its Various Materials for “Additive Manufacturing” and Molding Technologies at the EuroMold Trade Show WEBWIRE – Thursday, November 22, 2012 A world leader in high performance polymers, Arkema now offers a diverse range of materials for the manufacture of prototypes and functional technical short runs, using the laser sintering technology, the 3D printing/UV curing process, or molding for high-tech parts. Arkema will showcase its product range at the 19th edition of EuroMold, the global trade show for Moldmaking and Tooling, Design and Product Development, held in Frankfurt from November 27th to 30th. High quality parts fulfilling surface finish or mechanical properties requirements thanks to fine powders for Laser Sintering

Watching Open Source Destroy Capitalism Theft, or post-capitalism? About twenty years ago one of my college housemates, Jerry, had an idea. “What if you could send music over the internet?” This was the age of 2400 baud modems that made crazy high pitched noised while they tried to connect to the internet. My 20 megabyte external hard drive for my MacPlus computer had set my parents back about five hundred bucks. High quality digital audio files were about the same size as they are now (about ten megabytes per minute of audio).