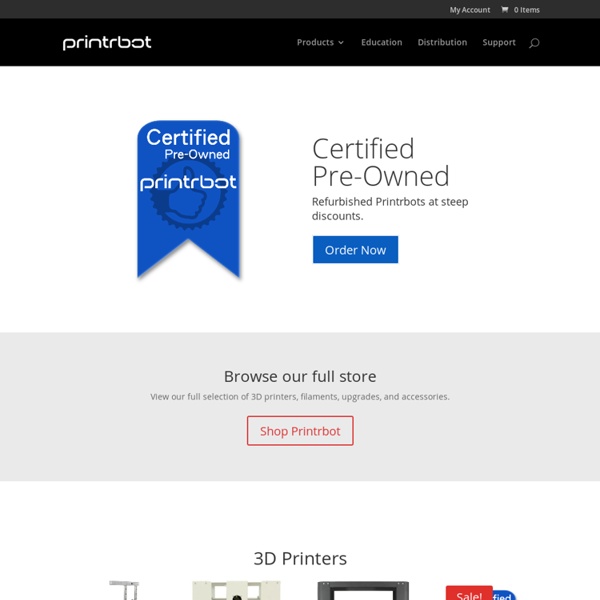 Printrbot: Your First 3D Printer by Brook Drumm I designed the Printrbot to be the simplest 3D printer yet. There are some great kits out there - the Makerbot, the Ultimaker, the Prusa Mendel, and others - but none as small and simple as the Printrbot. This all-in-one 3D printer kit can be assembled and printing in a couple of hours. Printrbot Printrbot Release status: working Printrbot is the simplest, cheapest, RepRap 3D printer in the world. As of April 2014 there are four versions - Simple, Jr, Plus & Go. Happy Printing, Brook Drumm Project Goal Printrbot jr assembly part 1 Finally got some time to work on assembling the actual printer. Started out with going through the LC parts to check if they were all there. Also snapped some photos of other components: printrbot Screws, nuts, etc.

Printrbot LC by abdrumm Printrbot is a 3D printer that had a highly successful kickstarter campaign... so successful, a laser cut design was needed to reduce production time. It has since become a hit. These are the unique parts that make up a Printrbot LC. Printrbot LC has a 6" x 6" x 6" (150 x 150 x 150 mm). Eventorbot Eventorbot! Open source 3D printer.The Mission and challenge behind Eventorbot, was to build a rigid, low cost 3d printer. Using less parts, easy to assemble, and is capable to self replicate most of its parts. It is 100% open source project, and all plans are available for anyone interested. Since 80% of the Eventorbots parts are printable. Once you build your first machine, you can make it even more affordable for friends, family, or the community. Cable Chain and Brackets for PrintrBot by alexmadsen1 This thing provides the means to effectively manage cables on a stock Printerbot. It connects the x axis (X-CARRIAGE to the X-MOTOR mount) carrying the extruder and hot end cables. Continuing on it then connects the z axis (X-MOTOR mount to the PB-BASE) carrying extruder, hot end, x end stop, and x motor cables.

Form1 - Kickstarter Are you frustrated that low-end 3D printers don’t have the quality to make the true beauty of your designs real? Do you dream of having the power and resolution of a truly professional machine on your desktop? We’ve created an easy-to-use system that rivals the output of high-end printers at a fraction of the cost. Our reason for starting this project is simple: there are no low-cost 3D printers that meet the quality standards of the professional designer. Hot Glue Gun Extruder for Your CNC Machine or 3D Printer 3D Printing still costs a few dollars and may be out of reach of hobbiest who do not have any budget. The goal of this instructable is to construct an FDM (Fused Deposition Modeling) printer extruder (a key component) using a $3 Hot Glue Gun. If you don't think you have seen an FDM machine, you probably have. There are many hobby versions out on the market now ... Think Up!

Form 1 - article TechCrunch The Form 1 3D printer, which you may recognize from Kickstarter, has topped $1.4 million in pre-orders in just under a week on the crowd-funding platform. With nearly 1,000 backers already, the FormLabs team has sold out of all their early-bird pledge packages, so anyone who backs the project now is only ahead of the official website sale shipments. Mad Kickstarter success always comes down to demand. Disrupt runner up gTar walked away with 3x its funding goal because it made learning the guitar fun and easy.