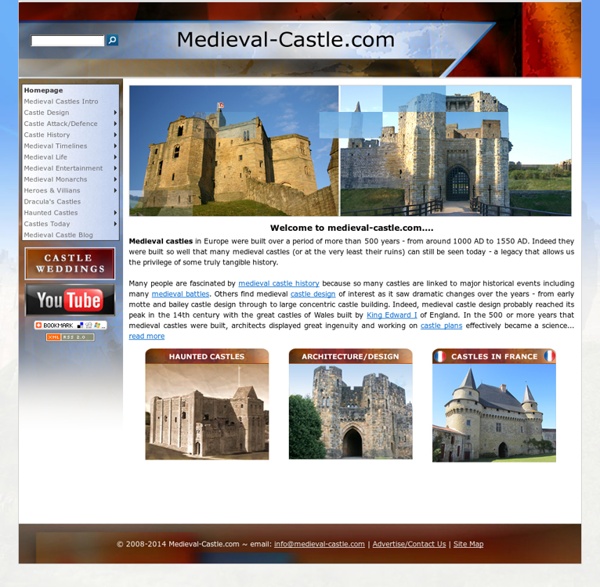 Medieval castles in Europe were built over a period of more than 500 years - from around 1000 AD to 1550 AD. Indeed they were built so well that many medieval castles (or at the very least their ruins) can still be seen today - a legacy that allows us the privilege of some truly tangible history. Many people are fascinated by {*style:<a href='http://www.medieval-castle.com/history.htm'>*}medieval castle history{*style:</a>*} because so many castles are linked to major historical events including many {*style:<a href='http://www.medieval-castle.com/medieval_timelines/medieval_battles_timeline.htm'>*}medieval battles{*style:</a>*}. Others find medieval {*style:<a href='http://www.medieval-castle.com/architecture_design.htm'>*}castle design{*style:</a>*} of interest as it saw dramatic changes over the years - from early motte and bailey castle design through to large concentric castle building.

Medieval Macabre These illustrations of medieval Devils, Demons, Witches, & Monsters are from authentic period sources. There are no 20th century-inspired fantasy images in this collection, nor any modern art with a medieval theme - these are the true visions our medieval ancestors had of the preternatural, the supernatural, and the unwordly. Gallery One | Gallery Two | Gallery Three | Gallery Four | Gallery Five The Hans Holbein Alphabet of Death | The Hans Holbein Dance of Death Each gallery contains 30 images.

Kuntz-Kamera of St. Petersburg Posted on June 27, 2007 by “Kuntzkamera” it’s a museum in St. Petersburg. Grimm's Fairy Tales This book contains 209 tales collected by the brothers Grimm. The exact print source is unknown. The etext appears to be based on the translation by Margaret Hunt called Grimm's Household Tales, but it is not identical to her edition. Interesting Tricks of the Body - Jeans Blog - StumbleUpon 1. If your throat tickles, scratch your ear. When you were 9, playing your armpit was a cool trick. Now, as an adult, you can still appreciate a good body-based feat, but you're more discriminating. Illuminated Manuscripts Manuscripts from the 8th to the 15th century Before the introduction of printing to Western Europe during the mid-15th century, all books were written by hand. The Latin for hand, ’manus’, and for writing, ’scriptum’, give us the word manuscript.

Medieval Pilgrimage Project - European Virtual School History Department Relics are holy objects associated with holy people such as Jesus or the saints. The use of relics was by no means a new phenomenon, it existed previously in Judaism, Buddhism and several other religions. In a world where people believed that evil and the Devil existed all around in the natural world, it was comforting to believe that good was also something that could be seen and touched. The Shapes of Medieval Swords Medieval Sword Shapes - Their unique shapes and changes over the centuries The Shapes of Medieval Swords Swords from the medieval Period went through some wonderful changes as the tools and technology of metal working changed. This change is also nicely seen in cultural differences in the swords.

The Very Secret Diaries Welcome! Here you may find the brilliant "Very Secret Diary" series by the wonderful Cassandra Claire. These are also published in her LiveJournal, but she was kind enough to agree to let your humble servant here publish them here. Enjoy! 15 Amazing Animated Short films - StumbleUpon We all love short animated films, but creating short film is very hard task. Putting whole story in 5 to 10 minutes is not easy. Can you imagine?