Holanda - The Town With No Roads 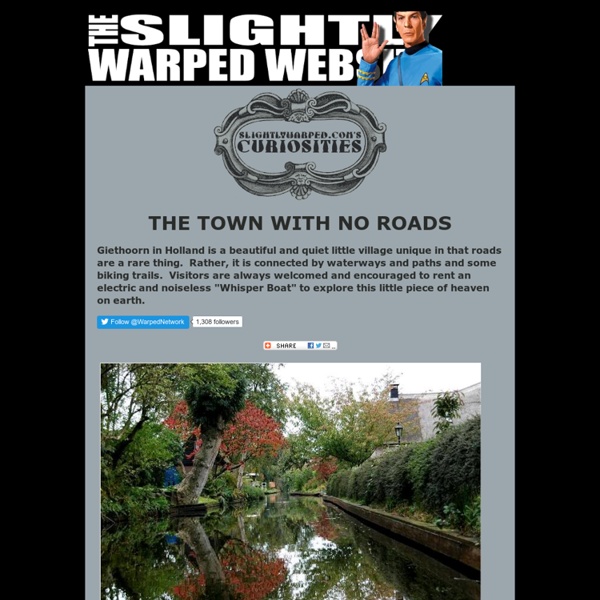 Amazing Places To Experience Around The Globe (Part 1) Preachers Rock, Preikestolen, Norway Blue Caves - Zakynthos Island, Greece Skaftafeli - Iceland Plitvice Lakes – Croatia The Traveller’s Medicine Cabinet: 5 Essential Drugs for the Road While out roving you aren’t always (or even often) anywhere near a hospital or pharmacy. But, if you pack these nutritional supplements and natural medications wherever you go, you’ll be able to cope just fine. #1: Kratom The Situation You’re hiking the Appalachian trail in the dead of winter.

25 Abandoned Yugoslavia Monuments that look like they're from the Future! These structures were commissioned by former Yugoslavian president Josip Broz Tito in the 1960s and 70s to commemorate sites where WWII battles took place (like Tjentište, Kozara and Kadinjača), or where concentration camps stood (like Jasenovac and Niš). They were designed by different sculptors (Dušan Džamonja, Vojin Bakić, Miodrag Živković, Jordan and Iskra Grabul, to name a few) and architects (Bogdan Bogdanović, Gradimir Medaković...), conveying powerful visual impact to show the confidence and strength of the Socialist Republic. In the 1980s, these monuments attracted millions of visitors per year, especially young pioneers for their "patriotic education." After the Republic dissolved in early 1990s, they were completely abandoned, and their symbolic meanings were forever lost. Podgarić Petrova Gora

China 2011-10-21 17:35:39 GMT2011-10-22 01:35:39(Beijing Time) China Daily A village in Mengxian county, Yangquan city of North China's Shanxi province, has just 17 residents. The village is called Dapin by local residents. Born and Raised Album Cover For almost a year now, I’ve been self-studying and researching lettering and type in more detail (hence my newest website) and I’ve noticed that many of you also share this passion for beautiful letters. So, today I want to share a post that has not only hypnotized me but also inspired me to keep practicing harder. Dave Smith is an extremely talented pictorial artists and signwriter recently commissioned by Sony Music to design the album cover for John Mayer’s newest album ‘Born and Raised’. The cover art took approximately a month to complete and the amount of impressive lettering, beautiful elements and stunning detail is simply magical. I was commissioned by Sony Music, New York to design an album cover for John Mayer, the American pop and blues rock musician. The album is called Born and Raised.

How I Can Afford My Life Of Constant Travel I’m confused. I’m simply confused as to how it’s possible that I have so far failed to properly explain how I’ve managed to travel/live/work abroad nonstop for 12 years straight (and counting). The questions are still pouring in every single day: How do you do it? Croatia National Tourist Board In order to provide you the best experience of our site, and to make the site work properly, this site saves on your computer a small amount of information (cookies). By using the site www.croatia.hr, you agree to the use of cookies. By blocking cookies, you can still browse the site, but some of its functionality will not be available to you. What is a cookie? A cookie is information stored on your computer by the website you visit. Cookies allow the website to display information that is tailored to your needs.

Graham Hughes: British man is first person to visit all 201 countries WITHOUT using a plane Graham Hughes, 33, used buses, taxis, trains and his own two feet to travel 160,000 miles in exactly 1,426 days - all on a shoestring of just $100 a weekYesterday he trudged into Juba, the capital of South Sudan, to end the epic journey that began in his hometown of Liverpool on New Year's Day 2009Spent four days 'in a leaky boat' to reach Cape Verde, was jailed for a week in Congo, and was 'saved from Muslim fundamentalists by a Filipino ladyboy'His lowest point was when his sister, Nicole, died of cancer two years agoHe says: 'I think I wanted to show that the world is not some big, scary place, but in fact is full of people who want to help you' By Matt Blake Published: 10:09 GMT, 27 November 2012 | Updated: 09:09 GMT, 10 December 2014 If anything can be said about record-breaking globetrotter Graham Hughes, it's that - throughout his travels - he's always kept his feet firmly on the ground.

Kazakhstan Atlas Obscura's journey into Kazakhstan will delve into the complex contours of a young country rich with thousands of years of nomadic history. On this trip, you'll learn about folk music, falconry, and the future of energy in Almaty and Astana, the country's old and new capital cities. An overnight train will then whisk you across long expanses of Central Asian steppe, where you'll have the opportunity to wander through bustling marketplaces, listen to fascinating and unfamiliar instruments, and taste Kazakh, Uzbek, Uighur, and Georgian delicacies. While the stunning Tian Shan Mountains beckon from beyond, you'll be welcomed by the country's artists, diplomats, guides, and architects. This trip is limited to 16 explorers. Highlights Wow! History's most iconic photos in colour VJ Day in Times Square Abraham Lincoln Anne Frank Bikini Atoll Thich Quang Duc – The Burning Monk