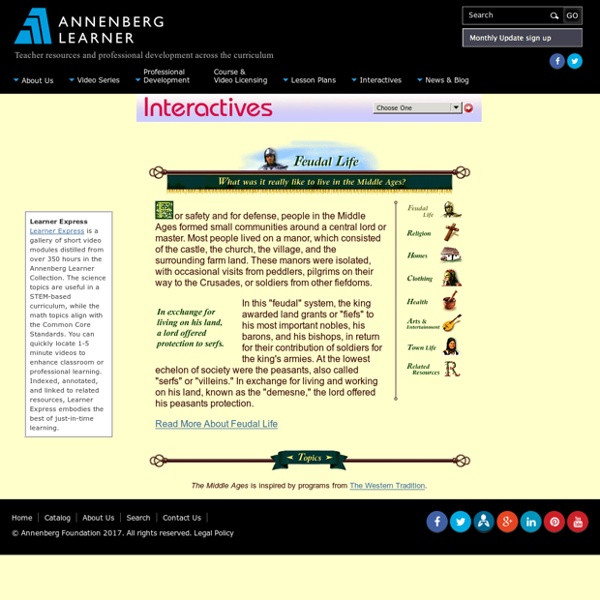 King Arthur, the Myth King Arthur, the Mythby David Nash Ford Some people believe that King Arthur is so inextricably tied up in Celtic Mythology that he must, in origin, have been, not a man at all, but a god. Like so many other characters featured in the Mabinogion, Arthur in his earliest form, appears almost entirely mythical. He and his companions have superhuman strength and abilities, and consort with giants and other mythological creatures. In the early Welsh poem "Preiddeu Annwfn", Arthur visits the Celtic Underworld, Annwfn, and his adventures closely parallel those of the cauldron-seeking god, Bran the Blessed. Even in Geoffrey of Monmouth's "History of the Kings of Britain," and Sir Thomas Malory's "Le Morte D'Arthur," upon being fatally wounded in battle, Arthur is carried to the mystical Avalon, apparently the Underworld home of the Celtic god, Afallach.

Middle Ages for Kids: Daily Life History >> Middle Ages for Kids Costumes of the Middle Ages by Albert Kretschmer Life in the Country The majority of people living during the Middle Ages lived in the country and worked as farmers. Usually there was a local lord who lived in a large house called a manor or a castle. Celtic Britain - history and culture Julius CaesarThe British Isles first come in contact with the general current of history in the year 55 B.C. In that year Julius Caesar, then engaged in the subjugation of Gaul, thoughf fit to cross the Channel with a military force, doubtless in the hope of finding that he could add to his resources for the achievement of his personal empire. He spent only a short time in the island, and returned again the next year with larger forces. But he found the prospect less promising than he had anticipated; and having no wish to extend the boundaries of the Roman dominion except as a means to more important ends, he again retired without making any serious attempt at subjugation; and for the next hundred years the Romans left Britain alone. It is generally agreed that the dominant races and languages were Celtic, akin to those of Gaul.

The Middle Ages: A Comprehensive Overview of Europe, 500-1500 The Middle Ages were a thousand-year period between the fall of the Roman Empire and the Renaissance in which the foundations of modern European culture were laid. Many consider them a “dark age” of ignorance, but the educational, legal, religious, and social institutions that still influence much of Western culture were created in this period. Scroll down to learn more about the Middle Ages. Feudalism and the Feudal System The feudal system of the Middle Ages was introduced to England following the invasion and conquest of the country by William I, The Conqueror. Short on supplies, South Sudan rebels fight on Before the South Sudanese rebels attacked the town of Kaya, they handed out supplies - a ragged strip of red cloth to identify themselves to each other as friendly forces, a packet of biscuits, and two precious magazines of ammunition per fighter. But government forces counter-attacked, killing several rebels and an American journalist. The rebels ran out of ammunition after 40 minutes and had to retreat back to their base in the bush. "We lack funds and support.

Medieval Food Medieval Food Medieval foods and diets depended much on the class of the individual. For those living in the manor house, there was a wide range of foods available. Suicide Statistics Home » Resources » Suicide Statistics Suicide in the United States Each year, 34,598 people die by suicide, an average of 94 completed suicides every day.More people die by suicide (34,598) than by homicide (18,361) in the United States.Suicide is the eleventh-leading cause of death across all ages.Fifty-four percent of completed suicides are done by firearm.

Guilds Medieval Guilds The guilds were an important part of city and town life. Guilds were Anxiety and Depression Association of America, ADAA Did You Know? Anxiety disorders are the most common mental illness in the U.S., affecting 40 million adults in the United States age 18 and older, or 18.1% of the population every year. Anxiety disorders are highly treatable, yet only 36.9% of those suffering receive treatment. People with an anxiety disorder are three to five times more likely to go to the doctor and six times more likely to be hospitalized for psychiatric disorders than those who do not suffer from anxiety disorders. Medieval cities In the 12th and 13th centuries, a period of economic growth led to the rebirth of cities. Cities became important centres of artisan activity and trade. Palaces, cathedrals and markets were built in the cities, which were protected by walls. A new social class appeared called the bourgeoisie. It was made up of traders, artisans and bankers. The following links could provide information about different important issues related with medieval cities.

Teen Suicide Is Preventable Teen suicide is a growing health concern. It is the second-leading cause of death for young people ages 15 to 24, surpassed only by accidents, according to the U.S. Center for Disease Control and Prevention. According to experts Michelle Moskos, Jennifer Achilles, and Doug Gray, causes of suicidal distress include psychological, environmental and social factors. Mental illness is the leading risk factor for suicide. Suicide risk factors vary with age, gender, ethnic group, family dynamics and stressful life events. NIMH » Major Depression Among Adults Major depression is one of the most common mental disorders in the United States. The 12-month prevalence data for major depressive episode presented here are from the National Survey on Drug Use and Health (NSDUH). Based mainly on the 4th edition of the Diagnostic and Statistical Manual of Mental Disorders (DSM-IV), in the NSDUH study a major depressive episode is defined as: A period of two weeks or longer during which there is either depressed mood or loss of interest or pleasure, and at least four other symptoms that reflect a change in functioning, such as problems with sleep, eating, energy, concentration, and self-image. Unlike the definition in the DSM-IV, no exclusions were made for a major depressive episode caused by medical illness, bereavement, or substance use disorders. In 2015, an estimated 16.1 million adults aged 18 or older in the United States had at least one major depressive episode in the past year.