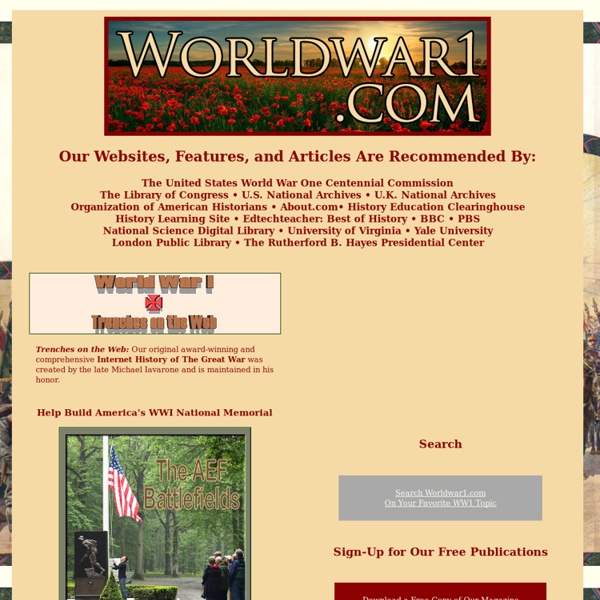 Related:  Where to find information - World War One

American Slave Narratives From 1936 to 1938, over 2,300 former slaves from across the American South were interviewed by writers and journalists under the aegis of the Works Progress Administration. These former slaves, most born in the last years of the slave regime or during the Civil War, provided first-hand accounts of their experiences on plantations, in cities, and on small farms. Their narratives remain a peerless resource for understanding the lives of America's four million slaves. This web site provides an opportunity to read a sample of these narratives, and to see some of the photographs taken at the time of the interviews. American Studies Hypertexts at the University of Virginia This page was begun as part of the American Hypertext Workshop at the University of Virginia, Summer 1996. Bruce FortCorcoran Department of HistoryRandall HallUniversity of VirginiaCharlottesville, VA 22903 Last Modified: March 6, 1998 Another AS Hypertext

Newspaper Pictorials: World War I Rotogravures, 1914-1919 This online collection is drawn from three primary sources: The War of the Nations: Portfolio in Rotogravure Etchings, a volume published by the New York Times shortly after the armistice that compiled selected images from their "Mid-Week Pictorial" supplements of 1914-19; Sunday rotogravure sections from the New York Times for 1914-19; and Sunday rotogravure sections from the New York Tribune for 1916-19. The War of Nations is particularly rich. This volume contains 1,398 rotogravure images with brief descriptive captions, broad organizational headings, and a table of contents; 32 maps that describe military engagements throughout the war; and a 3-page appendix that provides a chronology, statistics, treaty excerpts, and highlights of wartime events. Rotogravure collections were chosen for digitization since few quality originals exist in newspaper format due to paper deterioration.

Vintage Media This section of the website contains archive recordings - audio and video - of politicians, royalty, commanders, battles, songs and speeches from the wartime era. Included are the best known wartime songs, such as It's A Long Way To Tipperary and Pack Up Your Troubles; among video footage is film of Archduke Franz Ferdinand arriving at the town hall in Sarajevo; his assassination shortly after he re-emerged from his reception there on 28 June 1914 plunged much of the world into war the following month. Each recording is titled along with a brief summary together with the year of recording. Audio is in MP3 format; video footage is in Windows Media format; in both cases the file size is indicated in kilobytes. Both audio and video files are grouped by year. Click here to view present day photographs and film footage of the Western Front battlefields. A "Dixie" (from the Hindi degci) was an army cooking pot

BBC News | World War I | The Great War: 80 years on Monday, November 2, 1998 Published at 14:42 GMT The Great War: 80 years on It is 80 years since the armistice silenced the guns of World War I. The war lasted from 1914-18, claimed 10 million lives and forever changed the political map of Europe. Using personal accounts and historical analysis BBC News Online looks back at what became known as "the war to end all wars". Archive radio interviews "There was nothing but brown earth, shell holes and death" Images and newsreelFootage and photographs from the battlefields. Letters home Soldiers revealed their hopes and fears in letters sent from the front. My grandfather's warBBC reporter Andrew Bell retraces his grandfather's movements on the western front.Your stories Email BBC News Online with your family stories or memories of World War I. Back to top | BBC News Home | BBC Homepage | ©

Battle of Hastings 1066 Introduction Castle Architecture Although castle architecture developed over the centuries in line with weapons technology, the principles remained much the same. A good castle provided a secure base that could be easily defended. It needed defenses against frontal attack (thick, high walls and secure entry gates) and from undermining (rock foundations or a moat). It furnished means of repelling attackers while minimising exposure of the defenders (arrow loops, crenellation, machicolations, murder holes). It also provided means of escape and of making sorties against attackers (postern gates and secret tunnels). Further, it needed facilities to withstand a siege - a fresh water supply or large cistern and vast supplies of food. A good castle had no dead-spaces - ie external areas that defenders could not fire on, but did provide multiple locations from which vulnerable points could be defended. The best castles provided rings of defence so that defenders could hold out from a citadel even if the outer defences failed.

Related:
Related:  Where to find information - World War One